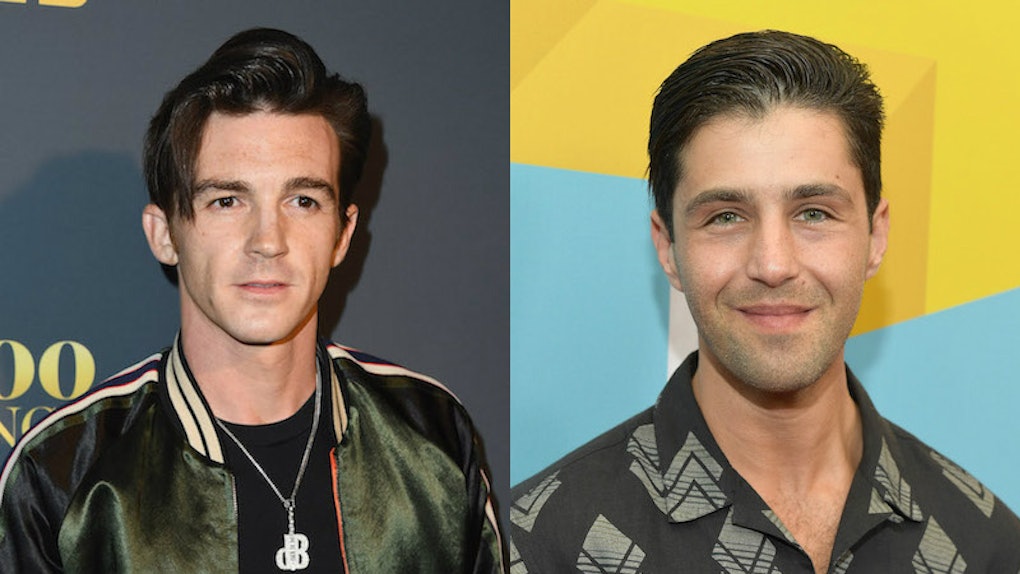 Drake Bell and Josh Peck have long buried the hatchet when it comes to their feud over Peck not inviting his former Drake & Josh co-lead to his wedding. Oh, you're not up to speed on the feud that crushed every '90s kid's heart last year? Well, then, lemme just get you up to speed real quick because things nearly reached Nicki Minaj/Cardi B levels. You know, minus the whole throwing-a-red-shoe thing. But it did get real ugly there for a hot sec between the two guys who played stepbrothers on their hit show, Drake & Josh, from 2004 to 2007. So, let's revisit the timeline of Drake and Josh's wedding feud and see how far they've come. I mean, I'm really glad these two are OK now, because for a while there it didn't look like they would ever speak again, and, like, way to almost ruin my childhood, guys!

It all started when the Grandfathered alum married his longtime girlfriend, Paige O'Brien, and failed to invite Bell to the nuptials. Um, dude, what were you thinking? I mean, even John Stamos somehow managed to score an invite, and he only played your TV dad for, like, five seconds. OK, fine — it was 22 episodes. But Bell played your comedic counterpart for nearly a decade on The Amanda Show and Drake & Josh and that's gotta count for something, right?

Bell then went off on Peck on Twitter the next day because of course he did.

"When you're not invited to the wedding the message is clear...," he wrote in a since-deleted tweet.

"Loyalty is key," he explained in another deleted post. "ALWAYS remember where you came from."

And then in a final later-deleted tweet he added: "True colors have come out today. Message is loud and clear. Ties are officially cut. I’ll miss you brotha."

An "insider close to the situation" spoke to Us Weekly on Peck's behalf and said he wasn't too thrilled with Bell's tweetstorm.

"At Josh’s wedding this weekend some guests were asking Josh Peck where Drake was," the source said. "Josh told everyone that he and Drake hadn’t spoken in three years. They would tweet each other back on social media a couple times a year, but never actually spoke. When Drake didn’t get invited to Josh’s wedding, he started tweeting all of those dramatic memes. Josh was really hurt. They aren’t close anymore and Josh had a very small wedding."

John Stamos rolled up to sneakily weigh in on all the wedding drama on Instagram.

"I got invited to the wedding and I didn't even want to go," he wrote in the caption of a pic of Peck embracing him. "#Honeymoon."

Ooooh, burn! And I'm not talking about the fact that both of these guys look like they could use a healthy dose of sunscreen in that shot.

In an interview with People, Bell opened up about getting snubbed.

"I was caught off guard," he said. "I hadn't heard of anything about it."

He also claimed that there were no hard feelings. "He's been my best friend for 18 years," he explained. "In all honesty, we talk all the time, we've been talking. I was just expecting…"

Bell told ET during a Facebook Live that he regretted sending out the tweets, and said he and his former co-star were now back on good terms.

Here's what he said:

We've been together 18 years, Josh and me, me and Josh. We've been so close, it was just one of those things where you know, I'd been talking to him, and he's been telling me about the engagement. And then I saw on social media, the wedding, and I didn't hear about it. So, it was just one of those things where it was just like, 'You didn't even tell me?! I had to find out on social media?' And then you're like, 'You know what!? Fine!' and then I'm like, wait, I probably shouldn't have done that. Yeah, I said the ties are cut or whatever, but I should have just texted that to him, you know. I was just being cranky. You know, it's like sibling rivalry for a minute.

Peck must have agreed, because a month later, the two men actually hugged it out and officially ended their feud at the MTV Video Music Awards.

A few days later, Peck posted a vlog on his YouTube channel called "Drake and Josh Reunion" that featured Bell.

"This is real life, this is it," Peck said to the camera with his arm flung casually around Bell. "You're welcome, childhood."

Watch 'til the end if you want to see Bell and Peck hanging with friends at YouTuber David Dobrick’s house:

A year after the former TV stepbrothers seemingly reconciled, Peck posted another video to YouTube. In this one, he shared the news that he and Paige were expecting a child! Bell made a surprise appearance about 12 minutes in.

"It's good to see you," he said to Cosgrove. "Sorry for not inviting you to my wedding. Thank you for not tweeting about it."

Funny stuff. As for Bell? He took to Twitter again with his response, only this time it was completely amicable:

"If anyone can get a Drake & Josh reunion goin it’s @DavidDobrik," he wrote.