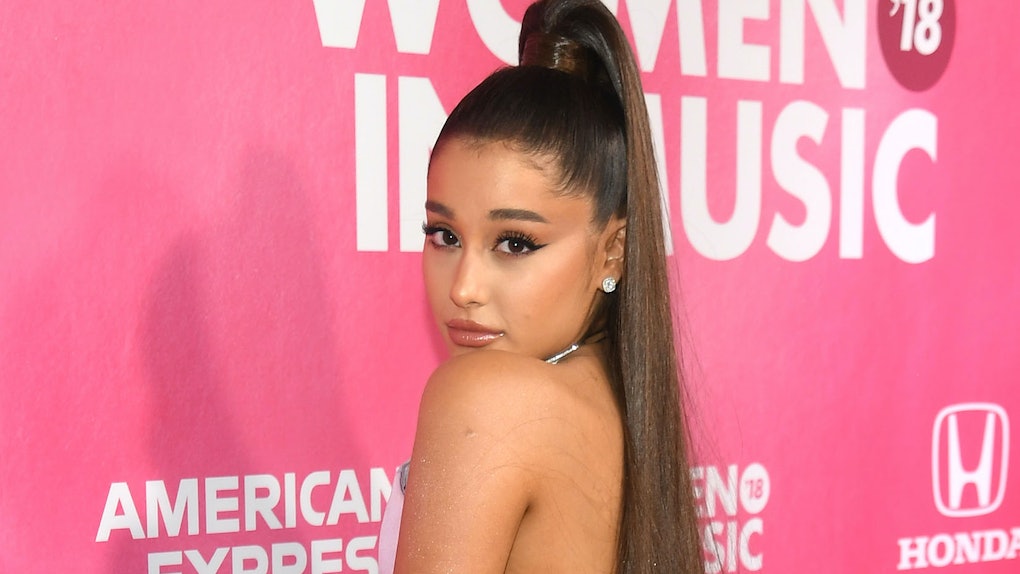 Years ago, people used to hate on Ariana Grande for always having her hair in a high ponytail. It's true. I've been a Grande stan since her Victorious days, and trust me, I've seen it all. People used to question why Grande never changed up her hairstyle and why she never let her hair down once in a while. But jokes on them because little did they know, Grande's high ponytail would eventually become her signature look. Now, fans rarely see Grande without her signature hairstyle, and this throwback photo of Ariana Grande shows that she's actually been rocking the hairdo since she was a kid.

For throwback Thursday on Aug. 15, Grande shared the adorable photo on Instagram and captioned it, "If anything .... she’s consistent." In the photo, you can see Grande wearing a blue long-sleeved shirt and what do you know? Her hairstyle for that day was a high ponytail wrapped up in a blue hair tie. The photo is so cute and shows that Grande really hasn't changed at all. What makes the photo even cuter is Grande's big brown eyes!

Take a look below.

I know! Grande looks so precious, right? Grande's throwback photo caught so many fans by surprise. I mean, it's not everyday that your fave celeb just randomly drops a childhood photo of themselves online. Heck, I don't know anybody in their twenties that does that. But Grande is taking pride in her ponytail and the internet is so here for it.

So many celebs commented on the photo, including Bebe Rexha, who said, "Cuteeeeeeee," as well as Jessie J, who commented, "😂❤️ You are the best and the funniest."

Honestly, same! I can't get over how adorable Grande looked as a kid.

Even Grande's mother, Joan Grande, left a few comments on the photo. She said, "You are and always were stunning," followed by, "Ahhhhhhh!! She’s everything and consistent... my heart!!!"

Mama Grande is right. Ariana Grande is always showing off her hair whenever she gets the chance and I love it. For example, on May 9, Givenchy announced that it would be revealing "The New Face of Givenchy" the following day and teased the reveal by sharing a silhouette of its new model on IG. The internet found it hilarious since it was extremely obvious that the new model was Ariana Grande. Fans didn't even need to see her face to know that it was her. The hairstyle revealed everything.

Grande also showed off her ponytail in her trippy music video for "In My Head." I call it "trippy" because the video had Grande's ponytail dancing around as if it had a mind of its own. Iconic.

Oh, and how could I forget Grande's "7 Rings" music video? In the MV, Grande wore a super long wig to make her ponytail look as long as ever!

It's clear that Grande loves her ponytail and she apparently won't be getting rid of it anytime soon!

More like this
These Tweets About Ariana Grande Joining 'The Voice' As A Coach Are All Over The Place
By Michele Mendez
When Are Ariana Grande & Dalton Gomez Getting Married? Here's The Reported Tea
By Corinne Sullivan
Cara Delevingne's Old Photo Of Her Grandmother With Prince Philip Proves It's A Small World
By Brandy Robidoux
Stay up to date