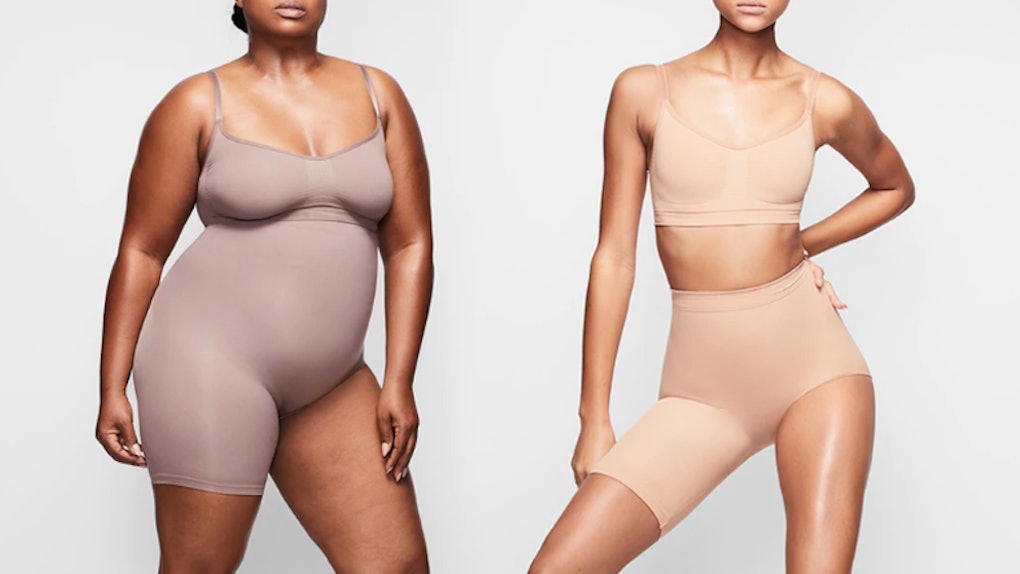 It seems like just as quickly as Kim Kardashian's SKIMS Solutionwear was released, it was snatched up by a lucky few, never to be restocked again. "I know it feels like we've been out of stock for a long time," Kardashian stated at the beginning of an Instagram caption where she gave a SKIMS restock update. If you, too, feel like it's been forever since the shapewear has been in stock, you'll be relieved to hear that you can purchase again on Wednesday, Nov. 20, at 9 a.m. PT/12 p.m. ET, exclusively on the SKIMS' website.

In the rest of the Instagram caption, Kardashian explained that the SKIMS restock will include all of the solutionwear from the first launch, plus four new styles: "We'll also be introducing 4 new Solutionwear™ styles based on your comments and requests since we launched that I can’t wait to show you." If you've been keeping tabs on the SKIMS launches, then you remember when Kardashian initially launched the new brand back on Sept. 10, 2019, she did so with six different collections (that all sold out in the first day): Seamless Sculpt, Core Control, Sheer Sculpt, Contour Bonded, Fits Everybody, and Mesh Intimates. The collections featured nine different shades — Sand, Mica, Clay, Ochre, Sienna, Umber, Oxide, Cocoa, and Onyx — and was available in sizes XXS to 5XL.

To celebrate the restock, Kardashian debuted SKIMS infomercials on Monday, Nov. 18 on her personal Instagram. The video advertisements were inspired by informercials that were popular in the '90s and featured none other than Kris Jenner, Kyle Richards, and Lisa Rinna.

Throughout the four different videos the trio created, they chatted, joked, and attempted to sell five different SKIMS products: the Sculpting Bodysuit, Sculpting Bra, Sculpting High Waist Brief, Solution Short, and Sculpting Short. "I mean, we can actually breathe and be perky at the same time," Kris Jenner said about wearing the Sculpting Bra.

Each of the three women were wearing different SKIMS items while filming the informercials. "I'm wearing this one that Kim designed so when you have a slit ... it's one leg. Sometimes you don't need both legs," Kyle Richards said about the Solution Short.

While there's no word yet on what the four new styles will be, if they're as in-demand as the rest of the SKIMS collection, they're bound to sell out just as fast. You can sign up to receive notifications surrounding the restock (and new launches) on SKIMS.com. Before you start scooping up the newly restocked SKIMS pieces, here are some picks you'll definitely want to snag before they sell out again: