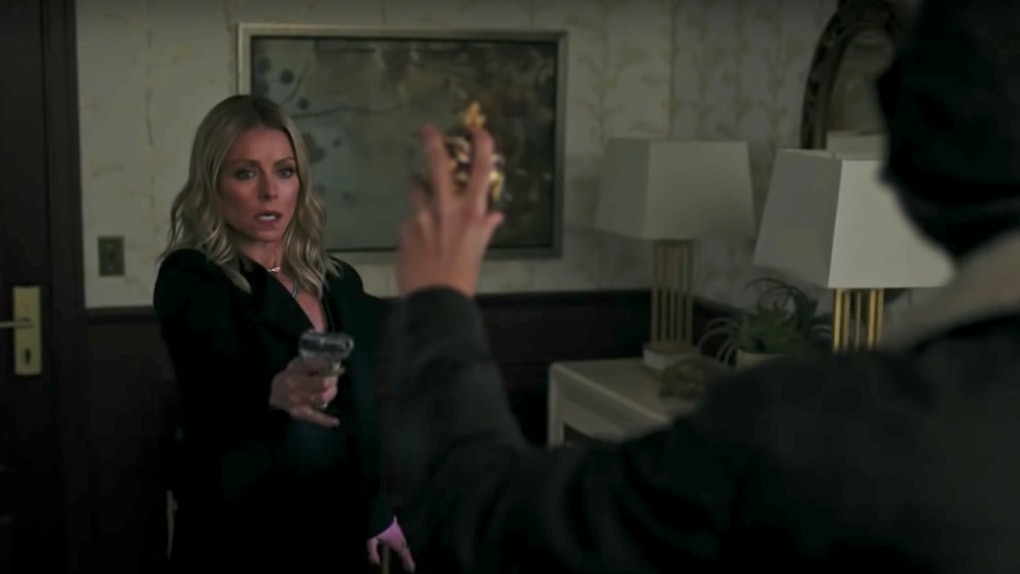 It is finally time for Kelly Ripa to make her big Riverdale debut, and the CW is giving fans their first look at her character in a brand new scene from Wednesday night's episode. Before now, we have gotten quick glimpses of Ripa's mysterious character, named Mrs. Mulwray, in a couple of photos and promo clips, but the new scene is the first time we actually hear her speak and learn much more about what she's up to. Check out this new Riverdale scene from Season 3 Episode 11 for your first look at how Kelly Ripa's character will shake things up in Riverdale.

Spoiler alert: This post will discuss plot details from Riverdale Season 3 Episode 10, "The Stranger." At this point, the Riverdale teens are wrapped up in more mysteries than anyone can even keep track of. The strange cult of The Farm still looms large, and although last week's episode seemed to reveal who the Gargoyle King was, many fans still have a ton of questions about that unmasking. The latest episode also hit us with a new shocking mystery: Who shot Hiram Lodge? Towards the end of the episode, Hiram is shot in his office by an unseen shooter, leaving him unconscious in the emergency room.

Although there are a ton of potential suspects in the Hiram Lodge shooting, Kelly Ripa's new characters may be the most suspicious. Mrs. Mulwray was teased as Hiram's mistress, and all of the promo clips and photos we've seen of her show her holding a gun. It is no wonder why Jughead's investigation into Hiram's shooting leads him to Mrs. Mulwray. Check out Jughead's intense standoff with Mrs. Mulwray in the newly released scene below:

The new scene shows Jughead snooping around Mrs. Mulwray's room and finding a glambergé egg, an expensive trinket we have seen earlier this season in Hermione Lodge's possession. Mrs. Mulwray catches Jughead with the egg and pulls a gun on him, and Jughead's response reveals that she is, or is pretending to be, Riverdale's water inspector. Jughead asks if Hiram Lodge gave Mrs. Mulwray the egg as payment for something, but the scene ends before we get an answer.

It seems a bit more likely, though, that Hermione Lodge may have been the one to gift Mrs. Mulwray the egg as payment for shooting her husband. After all, Hermione has been showing signs of finally turning on Hiram for a while now, and she did wind up getting something she wanted after Hiram's shooting. Earlier in last week's episode, Hiram was trying to strong-arm Hermione into making Claudius Blossom the new sheriff, but shortly after Hiram's shooting, we saw that Hermione had been planning on making F.P. Jones the sheriff for some time.

Of course, it is still not clear how long Hermione and F.P. have been planning their partnership, or why they are working together. And It is also unclear why Hermione would ask her husband's mistress to shoot him... or why Mrs. Mulwray would shoot her lover. So things are still pretty unclear with this whole situation, but fans will finally get some answers when the new episode of Riverdale, "The Red Dahlia," premieres on the CW on Wednesday, Jan. 30 at 8 p.m. ET.