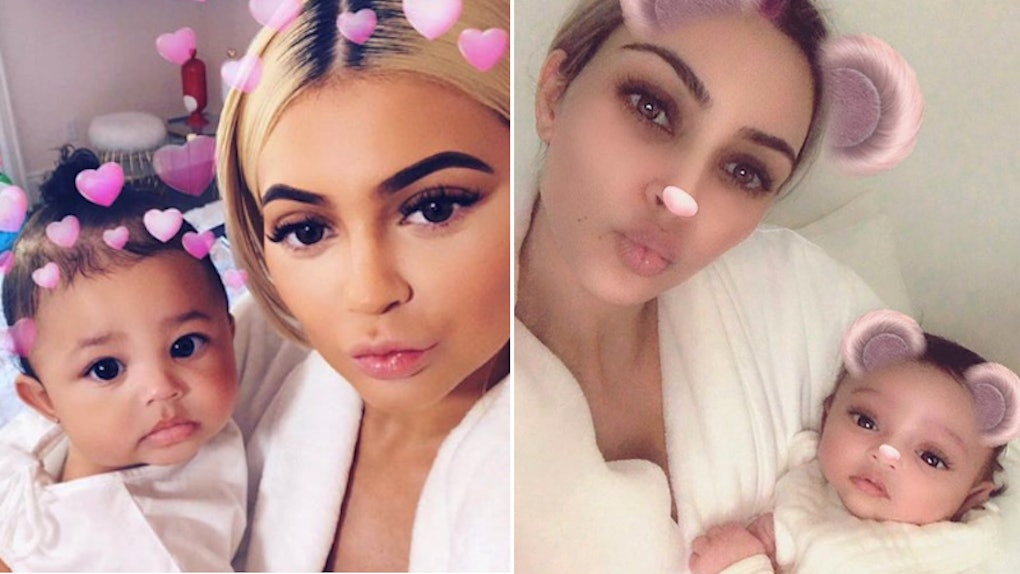 Sometimes, you just gotta look at famous celebrity baby photos. Luckily, the Kardashians are here to make that really, really easy. After the epic Kardashian Baby Boom of 2018, in which sisters Kim, Khloé, and Kylie Jenner all had new baby girls, fans' feeds have been peppered with the adorable famous wee-ones. Kylie Jenner just posted a photo of her daughter Stormi having a sleepover with Kim's babe, Chicago, and it's seriously cuteness overload. In the photo of Stormi and Chicago West having a slumber party, the cousins look almost like twins! Good genes, right?

Stormi Webster was born on Feb. 1, 2018, after Jenner did an impeccable job keeping her pregnancy under wraps. Fans certainly speculated she was pregnant, what with the total disappearance from social media and everything, but were overjoyed nonetheless when she finally revealed she had a daughter with boyfriend Travis Scott. Jenner announced the good news with a gorgeous YouTube tribute video titled, "To Our Daughter." In the home footage, Jenner's friends and family make tons of commentary about how she has always wanted to become a mom.

Only two weeks prior to Stormi's debut, Kim Kardashian and Kanye West welcomed their third child together, Chicago, via a gestational carrier. Kim was very public about her difficult pregnancies with her first two children, North and Saint, and made the decision with her doctors to go the surrogate route. At the end of Season 14 of Keeping Up With The Kardashians, Kim introduced her surrogate to her family, though the woman's face and identity remained hidden for safety purposes. In the same episode, we finally caught a glimpse of pregnant Kylie, too.

Today, both moms are back to slaying the Instagram game, posting smoldering photos of themselves sprinkled with a few adorbs baby shots here and there. On the night of Tuesday, Sept. 11, Jenner shared this sweet pic of Stormi and Chi wearing matching pink onesies while rolling around together. She captioned the shot, "slumber party."

Sometimes when I'm sad, I think about the year 2035 and the hopeful Kardashian spinoff series Keeping Up With The Kardashian Kids and what all these children will be like as adults. Khloé Kardashian's daughter, True Thompson, is the most recent baby to join the family, and arrived shortly after her older cousins on April 12, 2018. In total, family matriarch Kris Jenner has nine grandchildren at this time.

Fans are still waiting on one giant Kardashian kid photo shoot, but for now, we have a couple good cousin shots thanks to Instagram. For example, here's a pic of baby True and baby Chi:

And of course, North and Penelope:

Here's another great one of Saint with his little sis:

And an oldie but goodie of the whole Disick clan:

Like I said, sometimes you just have to take some time to look at celebrity babies. NBD.