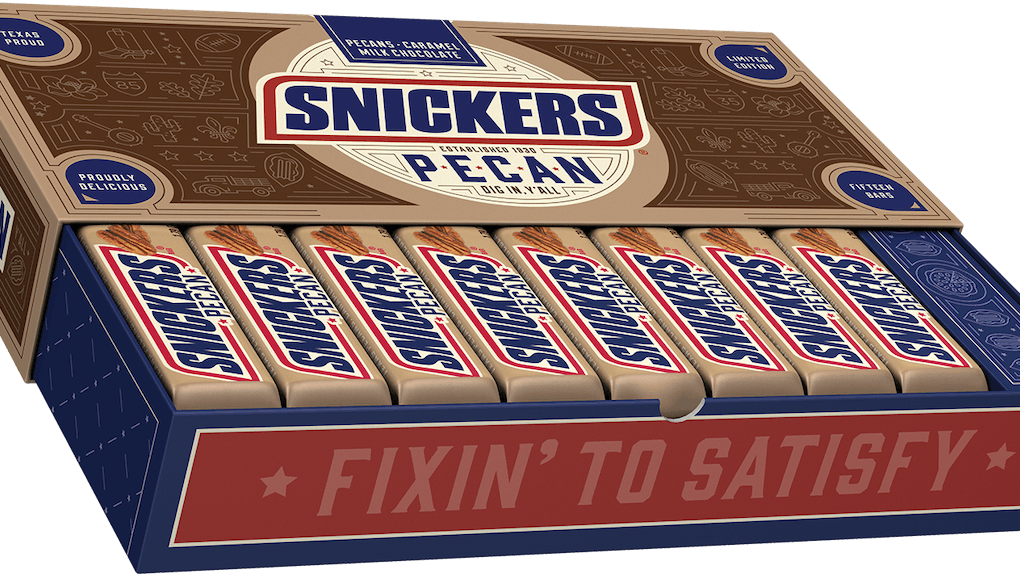 Are you patiently awaiting Halloween so you snack on your favorite candy bar? Where's the fun in that? No one says you have to wait. You may want to consider changing your mind now, because Snickers has just announced this new Snickers Pecan Bar, a limited-edition treat for the fall. Snickers announced the release of these special pecan bars following a "Great American Nut Search" to find out which nut Americans most wanted to see in a limited-edition Snickers bar.

According to Mars, the brand behind your fave Snickers bars, the limited-edition Snickers Pecan Bar will feature your fave Snickers ingredients — caramel and milk chocolate — but with the pecans instead of peanuts. I don't know about you, but I would seriously consider giving these a try, as pecans are one of my fave nuts.

The Snickers Pecan Bars came to be after the company asked America what nut they would like in a Snickers bar. My fellow Californians apparently chose pistachios, while the people of Florida were on team cashews. Though I think either of those would've been delicious, I do have to side with the people of Texas on this one — pecans might've been the best possible choice.

Snickers took to Twitter and other sites Sept. 25 to announce the official Snickers Pecan Bars. In their press release, Brand Director of Snickers, Josh Olken, stated that "fans from Texas and across the south are nuts about pecans and wanted to taste America's native nut in our iconic candy bar. We hope our fans are as excited to try the limited edition SNICKERS Pecan Bar as we are proud to produce them right in our Waco plant."

This isn't the only Snickers treat that you should be trying this fall, though. They recently teamed up with Nestlé and Mars, Inc. also brought a Snickers Flavored Chocolate Milk that delivers some protein wrapped up in a sweet sip. However, you may have missed the Dairy Queen Snickers Blizzard Treat, which came back on the scene as a requested fan fave and was available in July through August 2019. If you missed that one, you may be able to make up for it by buying a box of Snickers Pecan Bars and making your own fall ice cream creation. I'm about ready to buy a box on that idea alone.

Speaking of the Pecan Bars, though, if you're planning to get yourself a box, you may want to keep an eye on the Snickers Pecan website page. Mars is only releasing a limited number of these curated boxes, 2,800 boxes, to be exact, and when they're gone, they're gone.

Not sure about you, but since I missed out on the Dairy Queen Snickers Blizzard Treat and have yet to try the Snickers Flavored Chocolate Milk, I'm thinking the Snickers Pecan Bar is at the top of my list for fall treats to grab before they're gone.