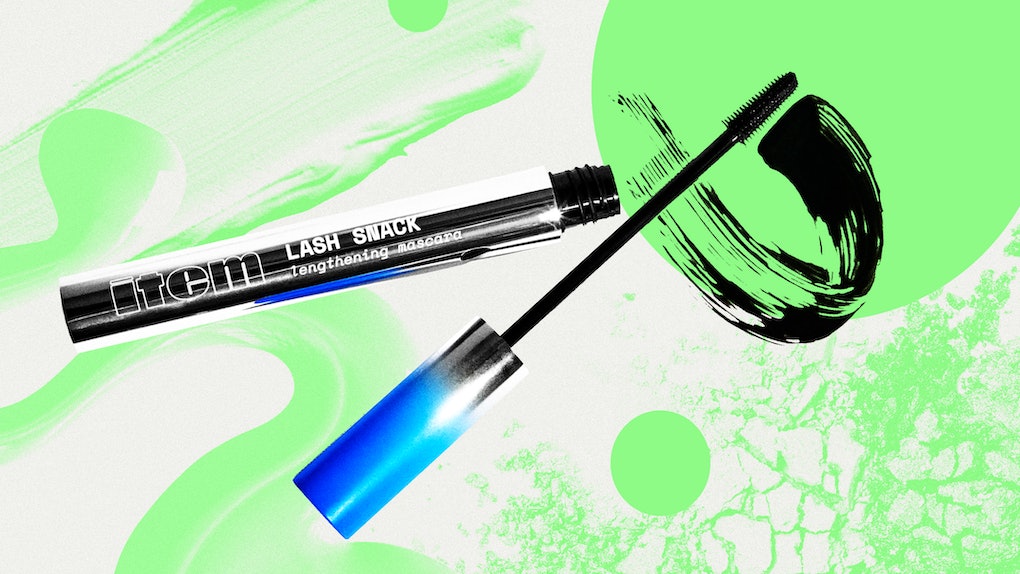 With thousands of beauty brands crowding virtual shelves and influencers touting a new product every day, how do you decide what's actually worth a shot? You leave the trial and error to the pros. In Elite Daily's new beauty review series, What's The Deal With..., we'll sift through and test the buzziest products to give you an honest, no-bullsh*t look at how it works IRL, from the price and packaging all the way to the actual results. From there, you can decide which ones deserve a coveted spot in your beauty arsenal.

It feels like only yesterday Addison Rae Easterling was first emerging as TikTok's Sweetheart with a pout here and a nose scrunch there. Now, the 20-year-old boasts 69 million followers, counts Kourtney Kardashian as a BFF, is starring in the He's All That reboot, and casually co-founded her new brand, Item Beauty, which became a quick hit with her fans and followers. Item Beauty's Lash Snack Lengthening Mascara was an instant standout in the brand's repertoire, mostly because everyone wants Addison Rae's long lashes as much as they want her dance moves. And this Item Beauty Lash Snack Mascara review puts its lengthening claims to the test.

With 200 reviews on the Item Beauty website and an almost-perfect average consumer rating of 4.9 stars, the Lash Snack Mascara ($14, Item Beauty), released in August 2020, already boasts a pretty solid reputation with a solid formula to back it up. Some mascaras can dry out your lashes, but Lash Snack's formula features glycerin, castor oil, and coconut oil to deliver a smooth, hydrating coat of product. What immediately stands out to me, though, is the price. Similar mascaras on the market retail for several dollars more, and while the cost of Lash Snack tops a decent drugstore mascara, you love to see a more accessible option.

Buuuuuut, is the mascara's performance as good as its price? Here's how I scored it in the following categories:

OK, so here's the deal: Mascaras are arguably one of the most subjective makeup products. Something I love about this mascara could be something you hate. It's all relative. Now, let's talk performance. Right off the bat, I loved the way this mascara felt... because I barely felt it was on. You know how some mascaras dead*ss feel like goop weighing on your eyes? It's annoying as hell, and luckily, I didn't experience that with this formula. Smell-wise, the formula was neutral — not bad or chemical-y, but not sunshine and daisies.

Let's talk about the component for a sec. The mascara wand is unlike most others I've seen in that it's much smaller length-wise and still features a tapered tip. This came with pros and cons. On one hand, I loved it because it felt innovative, and it was easier to get into the corners of my eyes for detail work. On the other hand, it comes with a bit of a learning curve. That said, the formula transferred to my lid pretty easily as I applied it, due to the fact I had to apply a few more coats and get even closer to my lash line with the smaller wand.

Overall, as you can see in the before-and-after above, Item Beauty's Lash Snack Mascara does live up to its lengthening claims. The after photo was taken with only two coats of the mascara — no curling and no lash primer necessary. The end result mimics a slightly heavier lash extension look, although the formula appears a liiiiiiittle chunky after a few coats. In mascara terms, it's like Glossier's Lash Slick Mascara and Urban Decay's Perversion Mascara had a baby. Overall, I give it a solid four stars out of five. Your lashes won't go viral on TikTok, but they'll look a lot like Addison Rae's.

Lash Snack Lengthening Mascara
$14
|
Item Beauty
More like this
This ONE/SIZE Turn Up The Base Foundation Powder Review Is A Must-Read
By Theresa Massony
This Pholk Beauty GlowUp Mask Review Will Get You Ready To Glow
By Vanese Maddix
How To Get A Trendmood Box, AKA The Next Big Thing In Beauty Box Subscriptions
By Bella Gerard and Theresa Massony
Stay up to date