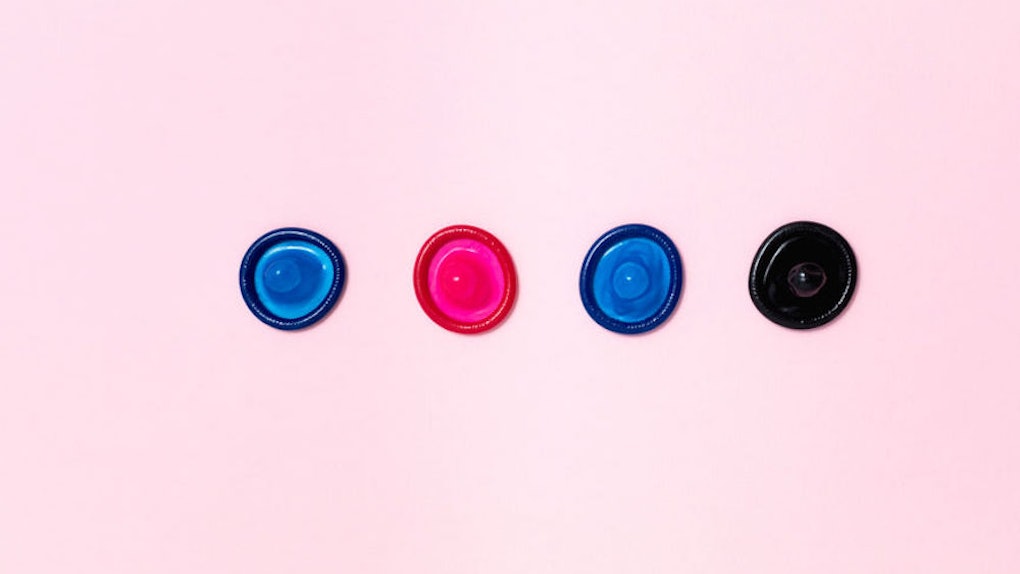 This Is What Happens When Someone Wears Two Condoms, So Be Super Careful

For most couples, sex is a super important, super intimate part of a relationship. And while sex is great, there's no denying the fact that there are several factors to consider — especially when it comes to using protection. Safe sex is crucial, and if you and your partner choose to use condoms, there are a several factors to consider, like which brand and size you prefer. But equally as important is knowing what happens when someone wears two condoms, because although you might think it's a good idea, that is very much not the case.

First things first: Why would someone use two condoms at the same time? Are there any benefits? "People may think it's extra protection," Amy Levine, sex coach and founder of Ignite Your Pleasure, tells Elite Daily. "However it's actually risky as it can lead to an increased chance of the condom breaking." Yikes.

However, using two condoms at the same time doesn't mean they'll be a more effective form of birth control. In fact, as Levine says, it's quite the opposite. Using two condoms doesn't make sex any safer; it actually "makes it more risky," Levine says. I know, I know, you might be thinking that double the protection equals double the safety and less of a chance of getting pregnant. But, if someone uses two condoms at once, Levine says there's a greater chance of pregnancy and STI transmission.

"The friction of 'double bagging' can actually cause the condoms to rip or break," she explains. So if you want to be super careful, it might be smart to just stick to the one condom. Additionally, Planned Parenthood advises using an additional form of birth control, such as the pill, an IUD, or the patch, in order to be even more careful.

It's great if you and your partner want to have safe sex, but using two condoms at the same time isn't actually safe, so stick to one. One condom will usually get the job done, but if you want to be extra careful, Planned Parenthood suggests having your partner pull out (while wearing a condom) before ejaculation to further reduce the chance of pregnancy. Note: Pulling out without a condom is not the most effective form of birth control, so if your partner is going to pull out, make sure you're using another form of birth control, whether it's condoms, or hormonal.

Safe sex is great sex, but there's a lot of information out there. It's easy to get confused, but just remember that using two condoms at once means more friction. More friction means a greater chance of the condom breaking. You wouldn't wear two thongs at the same time, would you? (Not that this is the same thing!) It would be uncomfortable, possibly dangerous (hello wedgie!), and completely unnecessary. In this case, less is more.