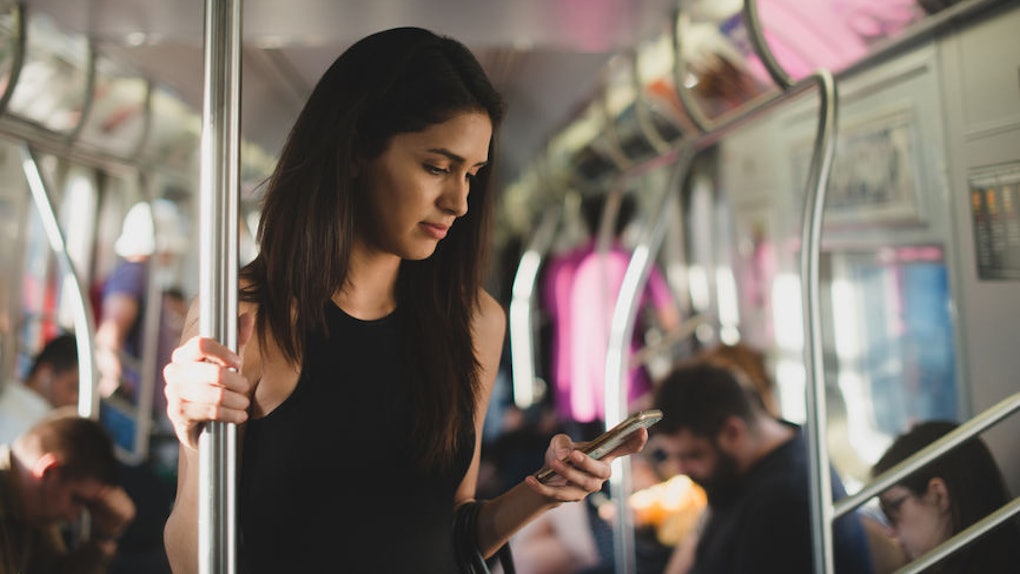 Undoubtedly, texting with an ex is akin to playing with fire. Sure, sometimes you get a thrill out of knowing your former flame still wants you, but unless you’ve actually worked through your differences and are committed to giving your relationship another shot, keeping up contact can be dangerous territory. Once you’ve decided to cease communication, the question is: What’s the best text to send your ex to get the message across that you're not interested?

To be clear, there’s no shame in the fact that you’ve been talking to your ex — it’s actually super common. Unsurprisingly, one 2014 study published in Computers in Human Behavior determined that more and more people are staying in touch with their exes due to the fact that technology has made it easier than ever to do so. Of the 374 participants, 45 percent reported texting their exes. If you’re trying to get over your relationship, maintaining contact over text can obviously prove pretty problematic because those constant reminders of your bond can make it challenging to move on. If you’re in a new relationship, keeping up contact with an ex can be detrimental as well. In fact, 2016 research published in Personal Relationships revealed that the more frequent someone contacted an ex, the less satisfied they were with their current relationship.

Whether it’s because that contact is hindering your ability to pursue a new relationship or it’s simply toying with your emotions, there are many reasons why you might decide to cut ties with your ex. It probably goes without saying, however, that accomplishing this isn’t always an easy feat. Still, Chelsea Leigh Trescott, breakup coach and the podcast host of Thank You Heartbreak, says there’s a certain formula you can stick to that may prove effective in getting the message across.

“Unless you’re dealing with an ex who has a healthy level of self-restraint, can tame their own emotions and are less reactive in the wake of heartbreak, instructing an ex to no longer text you is like poking a bear,” Trescott told Elite Daily. “It’s very likely that text messages feel like the only lifeline they have back to you, so telling them you’re cutting that cord can provoke them in a way that quickly becomes exhausting for you, the recipient, and excruciating for them.”

Trescott advises avoiding any language that sounds like you are scolding them or demanding them to act in a certain way, which will only incite a defensive response. Instead, she says the best approach is to be firm and unemotional without being accusatory.

“Rather than telling them what to do, tell them what you are no longer going to do,” she explained.

First, try approaching the situation with “I” instead of “you.” Trescott says that this way you can get your point across without sounding accusatory. So instead of saying, “You have to stop texting me. We’ve broken up,” you might say, “I have nothing left to give to this relationship” or “I have nothing more to add to this conversation.” Another option is to be totally straightforward: “It’s not healthy for me to keep engaging like this so this has to be my last text to you. Please respect what I’m saying and that I mean it.”

The more clear you are in what you want (or rather, don’t want) in this situation, the better. “Telling your ex the approach you will be taking acts as evidence that you’ve provided all the clarity that you can at this point. It also frees you of having to explain yourself away.”

According to Trescott, this move also puts you in the power seat. You’re shutting the conversation down. Which means that if it’s ever going to resume, you’ll be the one to make that decision and re-open communication. Feels pretty good to be in control, doesn’t it?

“Remember that the aim is a peaceful transition from being a couple to cultivating resilience and an exciting degree of independence,” says Trescott. “It’s important to keep this goal in mind when you’re communicating with your ex and it’s so easy to let anger, fear, disappointment or regret get the best of you. Before you send any message, read it over and ask yourself, will this provoke them? Will this prompt them into defending themselves? And, when it’s all said and done, is the message I’m sending necessary or is it just a fight for power and getting the last word in?”

If the goal is to get your ex to stop texting, you want to avoid saying anything that will likely inspire an emotional response. For example, Trescott warns against explaining all the reasons you don’t want to hear from them, or how if X, Y, or Z, had been different, you wouldn’t be trying to lose contact. She also recommends avoiding asking any questions, which will only inspire the conversation to continue when you’re only trying to shut it down.

Most importantly, she says: “Don’t send mix messages or leave the door ajar because you want to feel desired even when you have no desire for ever circling back and revisiting the relationship. Remain genuine, self-focused, firm and as neutral as possible.” In other words, while a text from the ex may provide a quick ego boost, it’s only going to confuse and complicate things.

So, what if they still keep reaching out? If you’ve already made it clear that you’d like to end communication and the texts continue rolling in, Trescott says it’s up to you to “rise above the noise.”

“Instead of trying to talk sense into them and the situation, silence may be your best and final option,” she explains. “Eventually, your silence will speak volumes because silence is the most destabilizing, not to mention the loudest, response of all.”

Of course, if that’s not working, you can always block your ex. Remember: Your emotional health comes first. If hearing from your former SO is taking its toll on you in any way, you shouldn’t have to sacrifice your own well-being just because it feels awkward to try and end the conversation. The best thing you can do is to remain clear, calm, and level-headed while avoiding any accusations, questions, or threats. All it takes is one message to get your point across — it may not be easy, but it is well worth the effort if you’re looking to leave the past in the past.