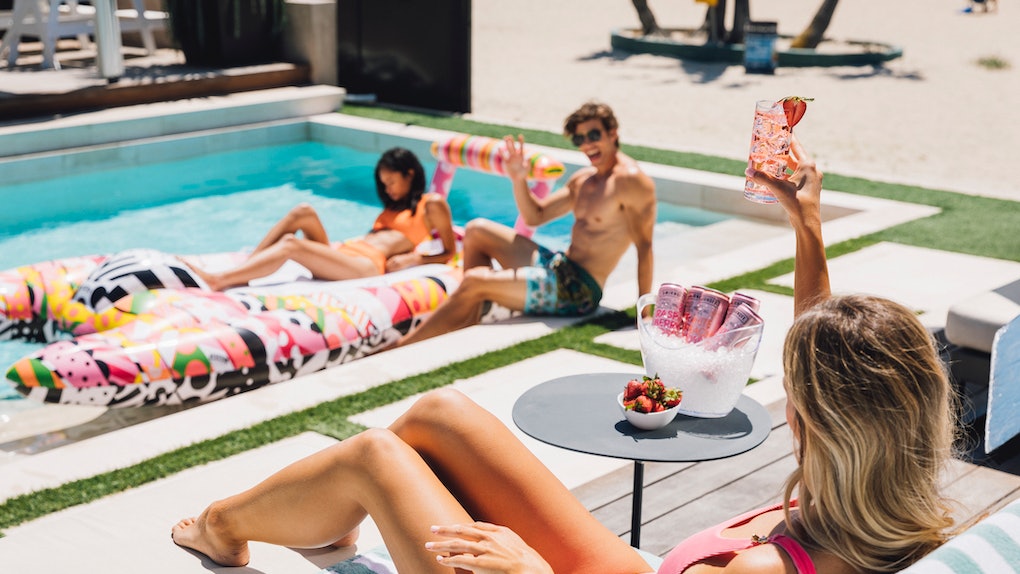 Summer is just weeks away and if you're anything like me, you've already started making a big list of plans for the warmer weather and longer days ahead. Though my to-dos can vary summer to summer, two things on my list always stay the same: relax poolside as much as possible and always keep refreshments near by. Thankfully, this Hydroplane Pool Float from FUNBOY and Smirnoff Seltzer is here to make your summer even more colorful.

To kick summer off in the brightest, most colorful way possible, FUNBOY partnered with Smirnoff Seltzer to create a one-of-a-kind pool float, the Hydroplane float. This multicolor float is covered in artwork by Jason Woodside and features all sorts of colors, patterns, and tones for a truly bright poolside accessory. The Hydroplane float, a limited edition item, fits two adults and has a rear storage compartment, dual handles, and a tether point. You can buy it on FUNBOY's website for $99.

The inspiration behind the design for the float was Smirnoff Seltzer’s new “Four Ways to Rosé” 4-pack, which comes in super Insta-friendly cans with bright colors and fun fonts. The colors and designs on the cans directly correspond to the pattern on the Hydroplane float, making FUNBOY and Smirnoff the perfect summer duo to help you unwind and take in the sunshine. Best of all? A storage compartment in the back means you're never far from a tasty drink.

Krista Kiisk, the Brand Director at Smirnoff Seltzer, said in a press release, "Knowing Smirnoff Seltzer is a brand that embodies 'fun,' it was an easy choice to partner with one of the most fun companies out there: FUNBOY. We're beyond excited to bring even more fun to Smirnoff Seltzer lovers this summer with the introduction of the Smirnoff Seltzer x FUNBOY pool float..."

Smirnoff Seltzer’s “Four Ways to Rosé” 4-pack, the inspiration behind this colorful pool float, features four brand new flavors, just in time for summer: Pink Apple Rosé, White Peach Rosé, Strawberry Rosé, and Pina Colada. Since the Smirnoff product is a rosé-themed pack, it makes sense why so much of the float is red and pink. These sugar-free spiked sparkling water beverages only contains natural flavors and come in slim, pink, 12 ounce cans. Each can contains about 4.5% ABV, which is comparable to a can of beer.

All the net profits from the float sales will go to Smirnoff Seltzer’s new Fun Fund, which is pretty much exactly what it sounds like: a literal summer fund for some lucky 21+ Smirnoff fans. You can keep an eye on Smirnoff's social media channels for more details on the Fun Fund, and info on how to win a chance to make your summer even sweeter than it'll already be.

If you didn't have a summer to-do list before, you definitely do now. With so many exciting new products coming from FUNBOY and Smirnoff, it's unlikely you'll have a single dull day come summer 2019. Float on, guys.