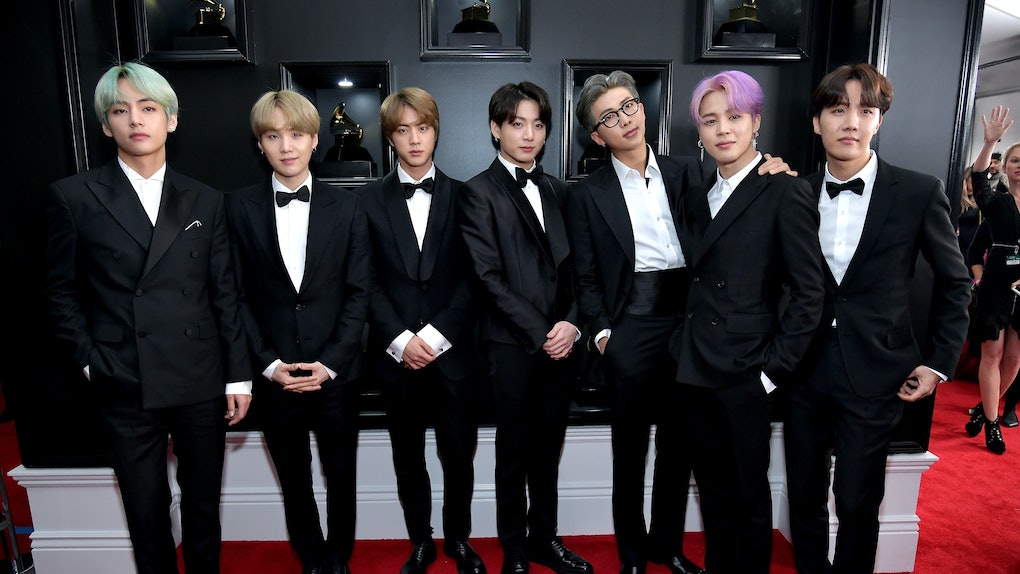 BTS hit up the Grammy Awards in February, marking the group's first time presenting a Grammy category. They took to the Grammys stage to announce the nominations for Best R&B Album, which ended up going to H.E.R's self-titled album. But what was it like when the BTS boys were preparing for this Grammys appearance? This behind-the-scenes video of BTS' Grammys night gives a long look into all of the preparation the boys put into debuting big at music's biggest night.

The video clocks in at about 32 minutes long. In it, fans get to watch as Jimin, Jungkook, RM, V, Suga, Jin, and J-Hope got themselves ready for their Grammy presentation moment. The 2019 Grammys marked a major milestone for the group not only because they were invited to present for the first time, but also because their work received their first-ever Grammy nomination. It, unfortunately, wasn't for their music (although they did just receive their first Billboard Music Awards nom for Top Duo/Group), but rather in the Best Recording Package category. But regardless of the category they were nominated in, it was still a major milestone for the group who, in the last year, has really been working to grow their success and fanbase in the U.S. (and succeeding).

Being asked to announce one of the Grammy categories during the live broadcast was a huge moment of visibility for the group, and this video shows all the moments that led up to it.

Throughout the video, the boys are seen getting their ~Grammys glam~ done (aka, their hair) and waiting in their suits to leave for the show. About 10 minutes into the video, RM (the group's leader and the one who speaks the most English out of the seven of them) leads the group through a practice run of phrases they could say on red carpets and on the Grammys stage when presenting Best R&B Album.

RM goes into full-on music conductor mode as he and the boys practice saying, "And the Grammy goes to..." It's such a sweet moment.

Other parts of the video show the guys sitting in the Grammys audience watching the various performances and bopping along to the music. You can hear Cardi B's performance playing in the background while the boys watch, clearly impressed and vibing with it, and they also got excited when Alicia Keys performed her classic, "Empire State of Mind." (Some of them held up JAY-Z's signature Hova hand symbol during the song and went, "Hovaaaa!")

Then there was, of course, the moment when they were actually on stage. RM thanked the BTS ARMY for helping them get to the Grammys stage and promised they would be back.

And that leads us to another sweet moment later in the video, when the boys were hanging out post-show. RM joked around by saying, "And the Grammy goes to... BTS!"

Then this adorable as hell moment happened.

Basically, the guys were dreaming about being Grammy nominees. One of them suggested that maybe their loyal fandom could get them nominated, then another clarified that it's the Recording Academy that determines the nominees. Then they said they'll keep working hard and joked that they'll find a way to make the ARMY part of the Recording Academy. Could you imagine?!

They really do have so much love for their fans, as this clip of Jimin and RM from the video shows.

In the car on the way to the Grammys, Jimin said to RM that anytime throughout the night that he didn't understand what someone was saying, he was just going to say "ARMY!"

Jesus, these guys are just the freaking cutest, OK? The cutest. Get them to the 2020 Grammys.