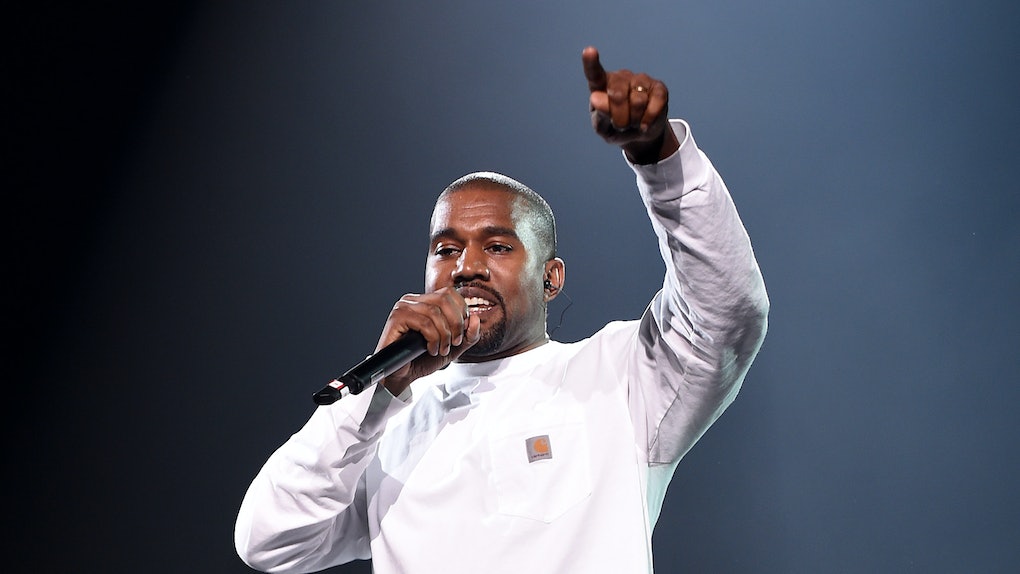 Kanye West revealed his highly-anticipated album Ye at a listening party on Thursday, May 31 in a open field in Jackson Hole, Wyoming. The seven-track album is intense, and these tweets about Ye prove that fans have feelings about it. There's a lot going on here. Let's break it down, shall we?

You might have heard snippets of the album on Thursday night if you happened to be watching Kim Kardashian's Instagram story. After flying back from her meeting to discuss prison reform with President Donald Trump at the White House, the Keeping Up with the Kardashians star posted footage of the listening party live. The full live stream appeared on the WAV app, so fans could watch and listen to the entire album for free.

Never one to shy away from embracing self-love, it appears that West named the album after himself: it's Ye like Kanye.

The splashiest piece of drama from the new album? Glad you asked. It sounds like West actually called out Tristan Thompson for reportedly cheating on his sister-in-law, Khloé Kardashian. (Are. You. Living?!) Elite Daily reached out to Kardashian and Thompson's teams regarding the cheating reports but did not hear back by the time of publication. In one song, West raps, "All these THOTS on Christian Mingle... That’s what almost got Tristan single." Uh, yeah, that just happened. To be fair, if Thompson did cheat, he may not have actually used Christian Mingle — West might have simply name-checked the dating site because it rhymes with "single." But either way, OMG.

Of course, fans were pretty shook at the lyric. Twitter basically blew up on the spot.

In another song, West referenced a slew of female celebrities. He raps, "If I pull up with a Kerry Washington, that's gon' be an enormous scandal. I could have Naomi Campbell and still might want me a Stormy Daniels." (Come on. This is 2018. When you think about it, it almost makes perfect sense that West would rap about the president's alleged affair with an adult film actress... alongside references to a beloved actress and an iconic supermodel.)

For the record, if you're expecting a Trump tweet to pop up in this story, let me just set you straight now: At press time, the president has not tweeted about the album.

Elsewhere on Ye, West reiterates his controversial comments about slavery. He raps, "I say, 'Slavery a choice.' They say, 'How, 'Ye?' Just imagine if they caught me on a wild day." To recap, West appeared on TMZ Live on May 1 and told host Harvey Levin, "When you hear about slavery for 400 years. For 400 years?! That sounds like a choice." He continued, "Like, you was there for 400 years and it's all of y'all!" His words sparked immediate backlash from people who countered that slavery was not, in fact, a choice. And now, on Ye, it appears that West is doubling down on his words. While people aren't necessarily tweeting about his new lyric about slavery, some Twitter users are making jokes about how they "choose" not to listen to the album.

One of the most popular tweets about Ye comes from none other than Kim Kardashian Weest herself. She revealed that her husband actually shot the album cover on his iPhone on his way over to the listening party.

The cover is a gorgeous shot of the scenic mountains in Wyoming at dusk, with lime green letters that read, "I hate being Bi-Polar its awesome."

With timely lyrics and mesmerizing beats, West's new album appears to be a hit among some fans.

Do you love this new album as much as Kanye loves Kanye?

More like this
These Singers Were Accused Of Copying Other Artists In Their Music Videos
By Brandy Robidoux
Britney Spears Fans' Tweets Reclaiming Justin Timberlake's May Meme Offer Alternatives
By Cianna Garrison
These Tweets Comparing Billie Eilish's 'Happier Than Ever' & Ariana Grande's 'Sweetener' Covers Are A Lot
By Sydney N. Sweeney
Stay up to date