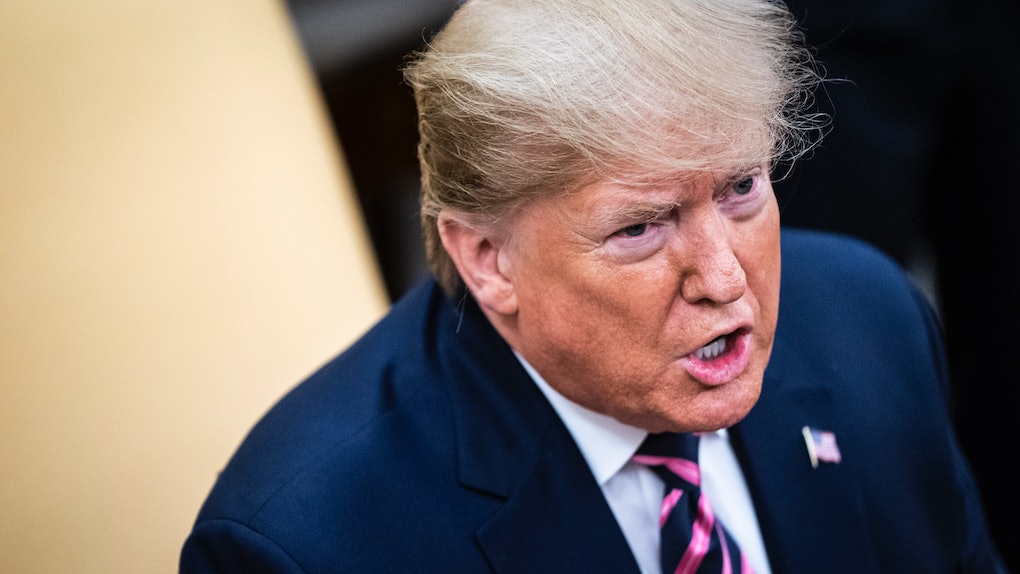 These Tweets About The House Impeaching Trump Are Just Wild

After months of debate and controversy, the House of Representatives did it. At 8:25 p.m. ET on Dec. 18, the House officially impeached President Donald Trump, making him only the third president in American history to be impeached. Social media users were quick to react to Trump's fate, and these tweets about the House impeachment vote marked the historic event. Elite Daily reached out to the White House for comment on the impeachment votes, but did not immediately hear back.

Ever since House Speaker Nancy Pelosi announced the launch of a formal impeachment inquiry into Trump on Sept. 24, Democrats took swift action to ensure a full House impeachment vote ahead of the holiday break. House committees held public hearings and collected testimonials from prominent ambassadors, diplomats, and national intelligence officials. Then, the House Judiciary Committee spent more than 14 hours debating potential articles of impeachment before approving two charges against Trump on Dec. 13: abuse of power and obstruction of Congress. The first charge focuses on allegations Trump attempted to pressure Ukraine to investigate his domestic political rival, former Vice President Joe Biden, while the second is in regards to Trump's alleged actions during the subsequent congressional impeachment inquiry. Trump has denied wrongdoing and claimed there was no quid pro quo with Ukraine. In a Dec. 17 letter to Speaker of the House Nancy Pelosi, Trump characterized the articles of impeachment as "disingenuous" and "preposterous," and claimed impeachment proceedings were "invalid."

The House vote on impeachment made waves on social media, with Twitter users quickly reacting to the historic moment.

Now that Trump has officially been impeached by the Democratic-led House, the impeachment process will move to the Senate, where the GOP holds a majority. According to the Constitution, the Senate is responsible for organizing an impeachment trial following a full House vote, and Chief Justice John Roberts will preside. Senate Republicans have already expressed their desire to keep Trump's impeachment trial is brief as possible, and indicated they may not allow witnesses. Nevertheless, some senators were already indicating where they stood.

Whether or not Senate Republicans manage to have a witness-less trial, it is highly unlikely the GOP-led Senate will vote to remove Trump from office in the new year. Trump may be making history as the third impeached president in American history, but Democrats may have more luck removing him from office in the 2020 presidential election than via the impeachment process.