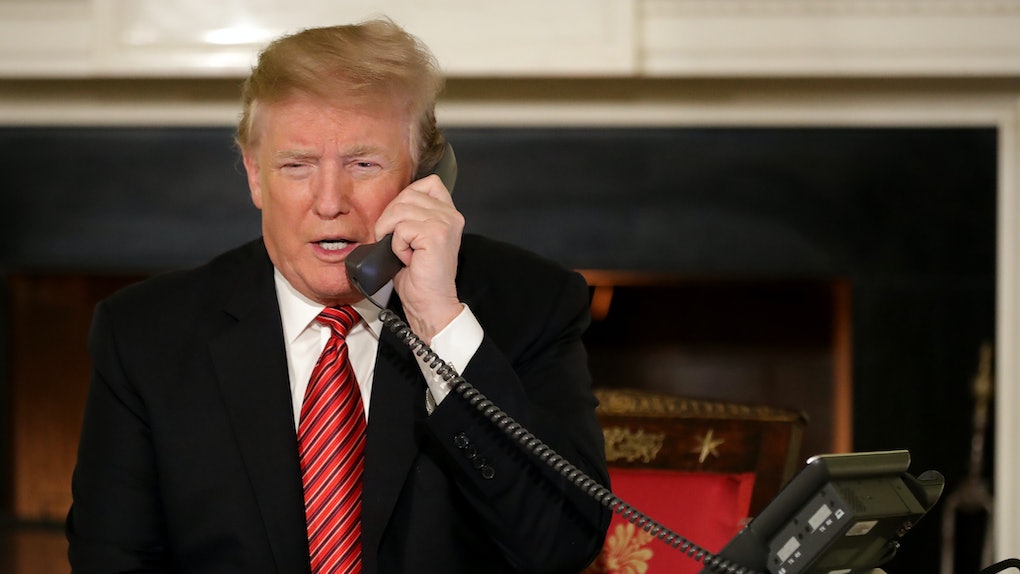 What's In Trump's Ukraine Call Transcript? He Asked Zelensky For A Favor

It's only Wednesday, and this week has already been a lot. On Sept. 18, reports surfaced of a phone call involving President Donald Trump and Ukrainian President Volodymyr Zelensky. Well, without further ado, a summary of the conversation has been released by the White House. So, what's in Trump's Ukraine call transcript? A favor was mentioned.

On Wednesday, Sept. 25, a summary of the July 25, 2019, phone call between President Donald Trump and Ukrainian President Volodymyr Zelensky was released by the White House. However, it's important to note that the document mentions that this summary is "not a verbatim transcript" of the discussion. Instead, it states that it's a recording of notes taken by duty officers in the White House situation room at the time.

The phone call, which according to the transcript lasted 30 minutes, started off with Trump congratulating Zelensky on his presidential victory in May. Most of the phone call involved Trump and Zelensky discussing their apparent "great relationship," but there was one point in the conversation that stuck out. Near the end of the conversation, Trump asked Zelensky for a favor, which involved former Vice President Joe Biden's son Hunter Biden. During the phone call, Trump asked the Ukrainian president to look into why prosecutors had ended an investigation into Hunter Biden's business dealings in Ukraine. Zelensky said that the next prosecutor general will "look into the situation." According to the document, Trump said,

Elite Daily reached out to representatives of Joe Biden for comment on the call transcript, but did not immediately hear back.

Trump also mentioned to Zelensky that he plans to have Attorney General William Barr and Trump's personal attorney, Rudy Giuliani, speak with Zelensky in an effort to strengthen future "coordinations" with Ukraine. The Department of Justice (DOJ) told Elite Daily in an emailed statement that Barr was made aware of the phone call a few weeks after it had taken place. The statement reads,

Some politicians, such as Rep. Adam Schiff of California and Rep. Alexandria Ocasio-Cortez of New York, note that Trump asking the Ukrainian president for a favor might be something to be concerned about.

A huge point of controversy surrounding Trump's requesting a favor from Zelensky is that it's towards Biden, one of the frontrunners in the 2020 Democratic presidential election. On Sept. 21, Biden took to Twitter to address the phone call between Trump and Zelensky before the transcript was released, calling it an "abuse of power." The tweet read,

Desperate Donald Trump knows that I can beat him, so now he’s enlisting the help of a foreign government — once again. It’s an abuse of power and violates every basic norm of the presidency. We cannot give him four more years in the White House.

Elite Daily reached out to Biden's team at the time for comment on the phone call, but did not hear back.

President Trump may not be too worried about the conversation with Ukraine, but I doubt this will be the last he hears about the situation.