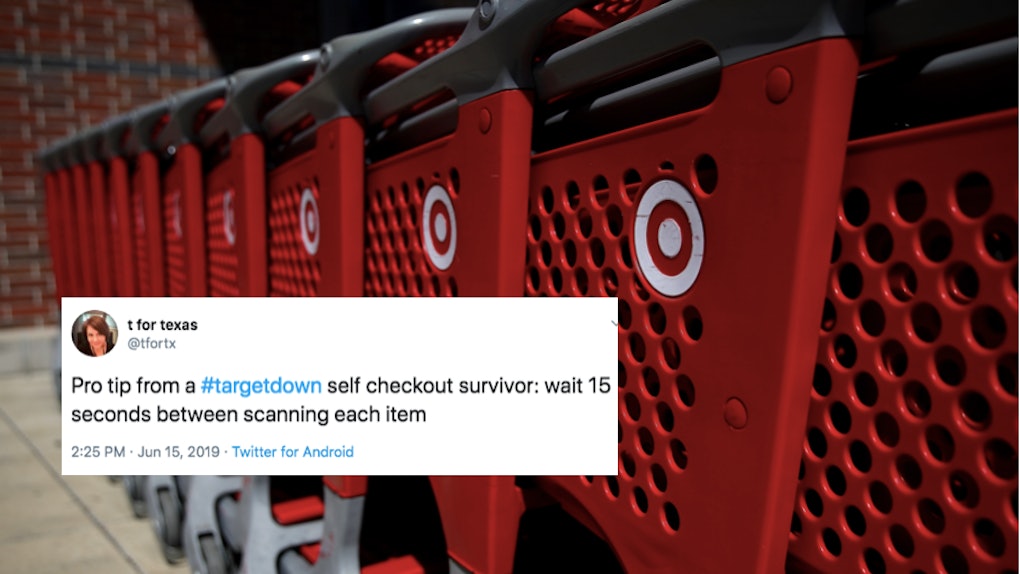 On Saturday, June 15, popular department store Target reportedly began experiencing massive register shutdowns across the country, according to Minnesota Public Radio. And as you would probably imagine, massive chaos ensued. So, if you haven't already seen these tweets about Target registers reportedly shutting down, they are truly an emotional roller coaster. Elite Daily reached out to Target for comment on the reports, but did not hear back at the time of publication. However, the company did acknowledge the issues in a tweet on June 15.

Target shoppers across the nation were seriously disappointed on Saturday, June 15, when the beloved department store's registers reportedly began to experience a series of technological problems around the noon hour, according to MPR. The purported problems were apparently preventing customers from successfully checking out in stores. But to encourage customers to stick around while the issues were being resolved, Target employees reportedly handed out snacks at individual stores.

Just after 2 p.m. CT, Target tweeted an apology to customers, confirming they were aware of the reported issues. The company recognized the issue that customers couldn't make purchases, and let everyone know they were trying their best to fix everything by troubleshooting the system. The tweet read:

We’re aware that guests are currently unable to make purchases at Target stores. Our teams are troubleshooting now and we apologize for the inconvenience. We will provide an update as soon as possible.

An apology, however, can only go so far. Since Target shoppers are forever dependent on their No. 1 favorite shopping (and weekend) destination, their tweets documenting the register shutdown are kind of unbelievable. Clearly, these reported problems resulted in a ton of panic, and nobody knew what to do. Definitely check out the dramatic tweets from Target shoppers amidst the chaos, below — they are beyond wild.

Some out there in the Twitterverse are recognizing that it was really the Target employees who were suffering amidst all of this reported register drama. While it was probably relatively inconvenient for shoppers — especially right before Father's Day — the store's employees were most likely more distressed than anyone else, since they were bombarded with a reported issue they couldn't resolve on their own. Take a look at the empathetic reactions, below.

Many in the vast world of Twitter, on the other hand, are trying to make light of this rather unfortunate situation. There is no point in panicking, or blaming the store's employees. The only thing you can do is patiently wait for the problem to resolve, and (ideally) see the bright side of it all. Check out the hilarious reactions to all of the commotion, below.

While the registers in physical Target stores were reportedly affected by the tech issues, it didn't appear online shoppers were affected.

Target shoppers will probably remember exactly what they were buying amidst the reported Target shutdown until the end of time. Maybe they were snagging something from Target's spring clothing line, or maybe they were browsing the Target Vineyard Vines collaboration. Either way, it was probably a memorable experience for everyone involved.

Even though it might feel like it, Target experiencing reported register issued isn't actually the end of the world, but I'm sure it wasn't the best Target experience those shoppers in affected stores ever had. Hopefully, everything will be completely resolved soon. Fingers crossed.

More like this
The 6 Best Organizer Wallets
By Scarlett James
This Dunkin' x Charli D'Amelio Merch Collection Features A Sparkly Tumbler, Scrunchies, & More
By Collette Reitz
These TikTok Starbucks Drinks Include Barista Creations Like A Churro Frappuccino
By Cianna Garrison
Stay up to date