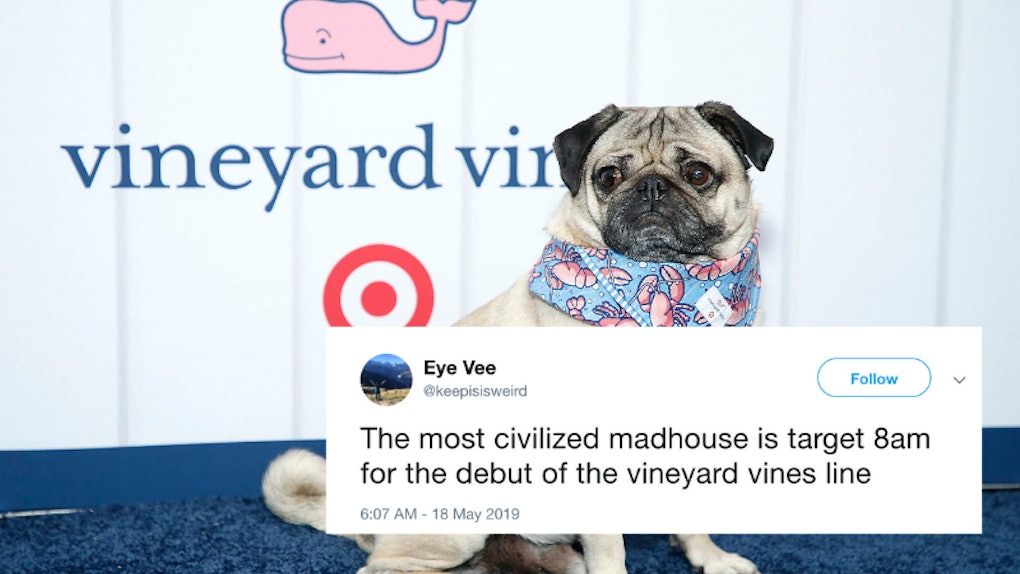 On Saturday, May 18, Target finally dropped its long-awaited Vineyard Vines collaboration — and preppies everywhere had zero chill when it came to scoring items from the limited-edition collection at a fraction of the brand's normal price. Unfortunately, for consumers who were heading to Target for their weekend shopping on Saturday morning, they had to contend with long lines of eager Vineyard Vine devotees snaked around Target locations. The struggle (and the wait) was real, and these tweets about Target's Vineyard Vines collaboration launch day share people's funniest stories from the ground.

Target is no stranger to internet-breaking collaborations (Back in April 2015, the Lilly Pulitzer for Target collection sold out in mere minutes and even sparked fights in stores), and the retailer's latest whale-centric collaboration did not disappoint. Considering more than 300 different products launched with prices between $2 and $120, per a Target press release, bargain hunters headed to Target storefronts early to scoop up as much merchandise as possible. It's hard to blame Target shoppers who went all in on this launch, because with the majority of items under $35 (versus Vineyard Vines' general price point of $14 to $400), there were major savings to be had.

For unsuspecting shoppers who were caught in the hype while going to Target for other reasons, this meant extraordinarily long lines — and many took to Twitter to make light of the situation or poke fun at the camaraderie between shoppers while they waited in very long lines.

In other words: It was not the day to get your weekend errands and other shopping done in a timely fashion.

Per Twitter users, there was one major lesson learned: People do not play when it comes to scoring whale-printed merchandise on the cheap. May the strongest survive (and emerge from Target with armfuls of Vineyard Vines gear).

It's no secret that Vineyard Vines has a cult following, and while many were struggling to wrap their heads around the madness that was the Target X Vineyard Vines launch, some shoppers took to Twitter to reveal that they had zero shame in the lengths they'd go to get their hands on a limited-edition monogrammed beach towel or any of the other items from the collection.

Whether you would happily rock Vineyard Vines all day, every day, or you wouldn't be caught dead wearing a whale-monogrammed shirt, you'd probably be hard pressed to score some of the limited-edition collection's most coveted items now — without paying a hefty premium, that is. Jokes aside, much of the collection has reportedly already sold out, according to Bloomberg, although some Twitter users noted that early buyers were re-selling items from the collaboration at double or even triple the cost on resale websites like eBay.

In an April 26 press release, Target originally said that the Vineyard Vines collection would be available through July 13 or "while supplies last." In this case, however, it looks like the adage "you snooze, you lose" applies, and long lines notwithstanding, it looks like some of the most eager shoppers had the right idea trekking to their closest Target first thing in the morning.

More like this
These Tweets & Memes About Matt Gaetz's Venmo All Make The Same Joke
By Cianna Garrison
These Tweets About NASA's Photo Of "Blue" Dunes On Mars Are In Awe Of The Stunning Shot
By Lara Walsh
When Will Cricut's Mug Press Restock? You Don't Have To Wait Any Longer
By Rachel Chapman
Stay up to date