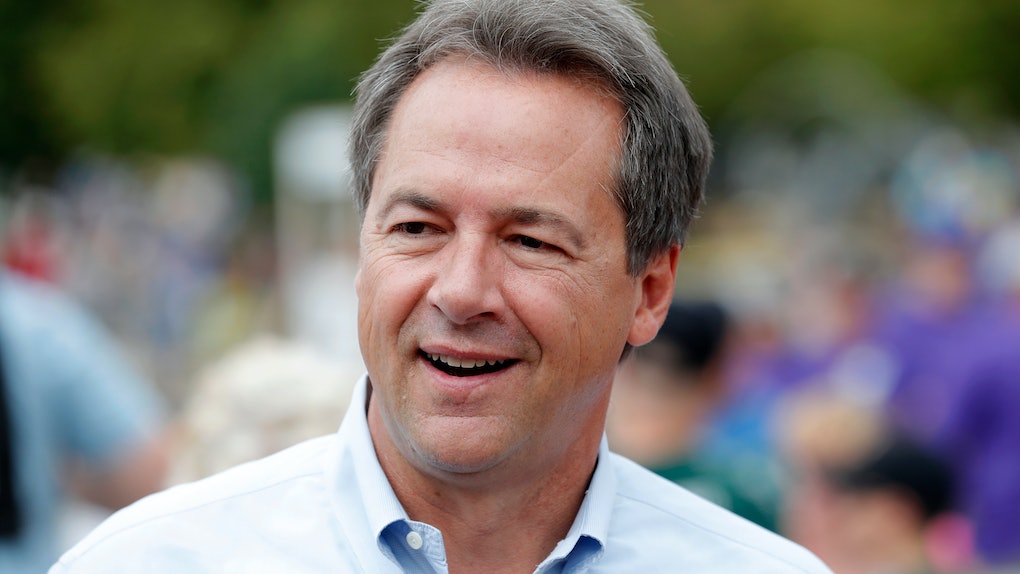 Twenty-two. That's the number of Democratic candidates running for president in 2020 after Montana Gov. Steve Bullock joined the race on May 14. This race is already looking like one of the biggest presidential fields ever and, while it's nice to have choices, the fact that it's still growing has some people seriously stressed out. These tweets about Steve Bullock's presidential campaign might even have you overwhelmed.

With several months to go before the first round of primary elections, the 2020 Democratic field is already a mixed bag. It's perhaps the most diverse group ever, with candidates from a range of backgrounds. Bullock added himself to the growing list of White House hopefuls on Tuesday, May 14, when he announced his presidential bid with a video shared online. The Montana governor, who was elected twice in the fairly red state, per NPR, centered the video around campaign finance reform and his goal to "take our democracy back."

"I believe in an America where every child has a fair shot to do better than their parents. But we all know that kind of opportunity no longer exists for most people; for far too many, it never has," he says in the video. "We need to defeat Donald Trump in 2020 and defeat the corrupt system that lets campaign money drown out the people's voice, so we can finally make good on the promise of a fair shot for everyone."

The goal is commendable and all, but some people just don't know what to do with so many candidates.

"And then there were...22," mused Johnny Verhovek.

People are clearly a little overwhelmed by the amount of Democratic candidates. While it may be hard to choose which person deserves the White House, at least we've got some options. After all, that's the point of a primary — you get to choose from a broad pool of candidates.

Bullock will be going against candidates such as Sen. Kamala Harris (D-California), Sen. Elizabeth Warren (D-Massachusetts), and South Bend, Indiana Mayor Pete Buttigieg. Former Vice President Joe Biden, who announced a bid back in April, seems to pose the biggest threat, though, as he's been consistently leading in the polls.

In his campaign announcement on April 25, Biden focused on President Donald Trump's response to the infamous white supremacist rally in Charlottesville, Virginia, in August 2017, which ended in violence. The rally, which stemmed from protests against the removal of statues of Confederate leaders from a local park, erupted into violence between the white nationalists and counter-protesters. One counter-protester, Heather Heyer, was killed in the clash. In response to the tragedy, the president seemed to place the blame on "both sides" and suggested that the white nationalists were "very fine people." Elite Daily previously reached out to the White House for additional comment on the subject, but did not hear back. In the announcement, Biden said that moment made him realize that "we are in the battle for the soul of this nation." He also warned that giving Trump another four years in office will "forever and fundamentally alter the character of this nation."

Sounds like the competition is on. But stay alert, because the number of 2020 candidates could increase at any second.