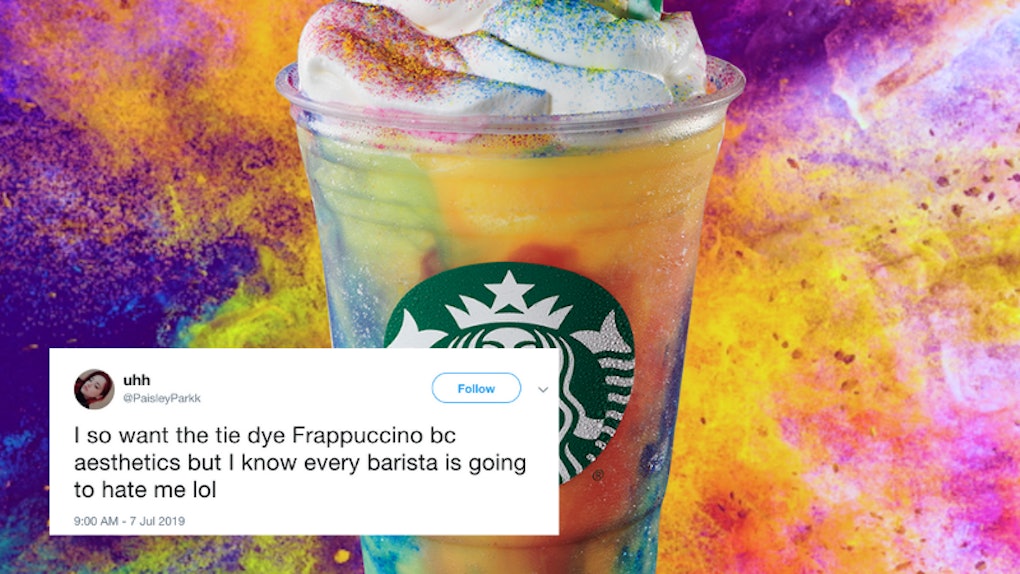 ICYMI, people have been getting so hyped over Starbucks' newest drink, which is taking over your Instagram feed as of Wednesday, July 10. While the coffee giant has no shortage of 'Gram-worthy sips in its arsenal, the Tie-Dye Frappuccino is taking things to the next level —and that's apparently both a good and bad thing, depending on who you ask. These tweets about Starbucks' Tie-Dye Frappuccino show that customers have mixed feelings about the colorful sip for one reason.

In the era of the Unicorn and Mermaid Frappuccino, I was surprised Starbucks was able to one-up its past magical creations with a new confection that's all sorts of psychedelic. While the Tie-Dye Frappuccino didn't officially roll out in storefronts until July 10, people still couldn't get over the fact that a drink that looks like the unicorn poop emoji was about to exist in real life to brighten up your feed. Now, the wait is over, and the groovy sip is just as head-turning as you'd imagined.

Paloma Carrington-Bataller, who designed the beverage, said in a July 10 press release:

We wanted to create something that celebrates summer and really conveys it both visually and through flavor within the beverage. We knew it had to make you smile at first sight and our Tie-Dye Frappuccino does all this! It’s summer in a cup and something everyone can relate to; it takes you back to sunny warm days of summer spent at camp or with friends and family.

Nostalgia and '60s flower power in a cup? I'll take it.

Carrington-Bataller continued, "It’s bright and colorful and fun and should bring a smile to your face. Perfect for the heydays of summer."

From the sounds of things, it's the drink of the summer, but the Twitterverse is split on whether or not we should actually be ordering it for one reason. Your local barista is going to be trying to whip up numerous Tie-Dye Frappuccinos over the next few days, and it looks like it's definitely going to be a pain to make.

So, what exactly goes into all those colorful yellow, red, and blue tie-dye swirls that you'll find in the Frappuccino? According to the press release, the drink "gets its color from turmeric, red beet, and spirulina," but the base reportedly tastes like banana candy, so I'd take that information how you will. As the icing on the cake, the vibrant sip is topped with swirls of vanilla whipped cream and dustings of yellow, red, and blue powder. Considering the intricate design of the refreshment, I'd keep in mind that it's likely that not every single Tie-Dye Frappuccino will look just like this, but I have feeling it'll still be almost too pretty to drink. Almost.

While you might feel for your local Starbucks barista, Tie-Dye Frappuccino will only be available for a few days at participating Starbucks stores in the United States and Canada while supplies last, so they'll only be whipping up this rainbow drink for a little bit.

Speaking of which: several Twitter users noted that their stores had already sold out of the Tie-Dye Frappuccino the morning of July 10, so I'd make sure to swing by your closest Starbucks sooner rather than later and snap a 'Gram before digging into this vibrant creation.