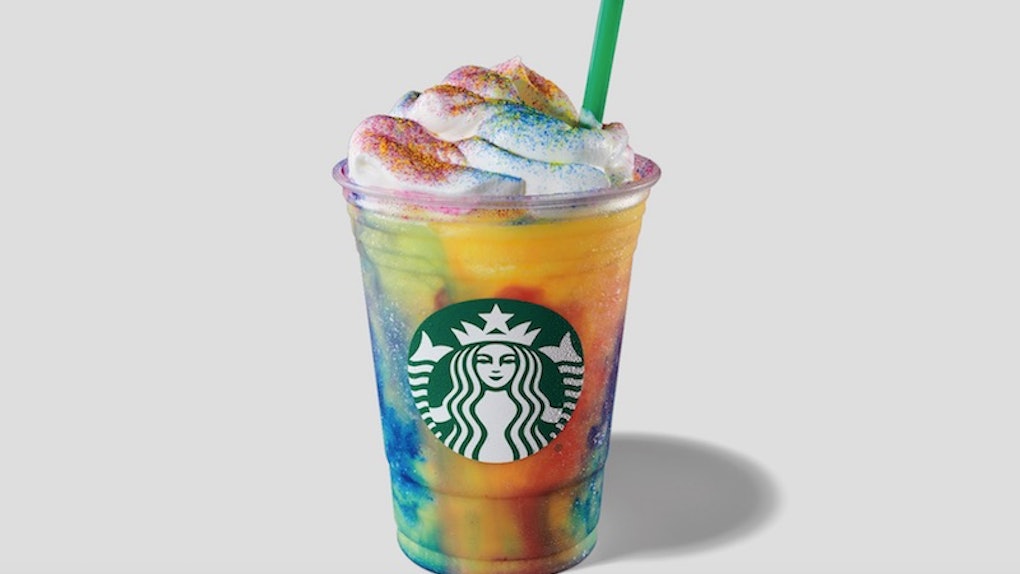 What's In Starbucks' Tie-Dye Frappuccino? These Ingredients Add Color To The Mix

Starbucks is good at a lot of things, but one thing it's really good at is making Insta-worthy drinks. Between vibrant colors and piles of whipped cream topped with rainbow sprinkles, the coffee hub has it down to a science. Starbucks' July 10 release, the Tie-Dye Frappuccino, definitely lives up to the company's reputation. The new drink boasts psychedelic swirls that'll have you asking an important question: What's in Starbucks' Tie-Dye Frappuccino? I mean, a technicolor beverage must be hard to pull off, right? Believe it or not, the ingredients used in the drink are pretty simple.

With one look at Starbucks' new Tie-Dye Frappuccino, you might think a bunch of out-of-this-world components were used to create its groovy appearance. I don't blame you, though; there are a lot of colors in that cup. To be specific, the drink is made with swirls of red, blue, and yellow (aka the primary colors), which create an eye-catching aesthetic that'll send you back into the '70s. With colors like those, you might assume that some sort of food dye is involved in the process — but that's not the case. According to Starbucks, the drink gets its colors from spirulina, turmeric, and red beet. Go figure.

That's not where the technicolor shades end, though. The Frappuccino itself is topped off with vanilla whipped cream and multicolored powder, which gives the drink even more of a rainbow aesthetic. Talk about Insta-worthy, am I right?

Between the Tie-Dye Frappuccino's vibrant swirls and colorful powder, it's definitely worth trying. However, its eye-catching appearance isn't the only reason why you should give it a sip. Apparently, the drink's taste is just as bold as its appearance. According to Starbucks, the new Frappuccino boasts a "tropical fruit" flavor that makes it beyond perfect for any upcoming summer beach trips. It's giving me major warm-weather vibes, and I can't wait to try it.

Apparently, I'm not the only one who's excited about the drink. Paloma Carrington-Bataller, the mastermind who designed the Tye-Die Frappuccino, talked about the new sip in a press release. She said,

We wanted to create something that celebrates summer and really conveys it both visually and through flavor within the beverage. We knew it had to make you smile at first sight and our Tie-Dye Frappuccino does all this! It’s summer in a cup and something everyone can relate to; it takes you back to sunny warm days of summer spent at camp or with friends and family.

Carrington-Bataller worked on the drink with folks at Starbucks' Tryer Center, which is a Seattle-based lab where tons of Starbucks drinks are created. Based off the Tie-Dye Frappuccino's gorgeous aesthetic and summery taste, it's obvious the team nailed it.

If you're hoping to give the Frappuccino a try this summer, you should act fast. According to Starbucks, the technicolor sip is only available for a "few days" while supplies last at participating Starbucks locations in the United States and Canada. With that being said, find a Starbucks near you and order the rainbow drink while it's still on the menu.

More like this
These TikTok Starbucks Drinks Include Barista Creations Like A Churro Frappuccino
By Cianna Garrison
Here's How To Make Chipotle's Dragon Sauce With 2 Simple Ingredients
By Daffany Chan
What's In Kellogg's & GLAAD's Together With Pride Cereal? Expect Berry Flavors
By Daffany Chan
Stay up to date