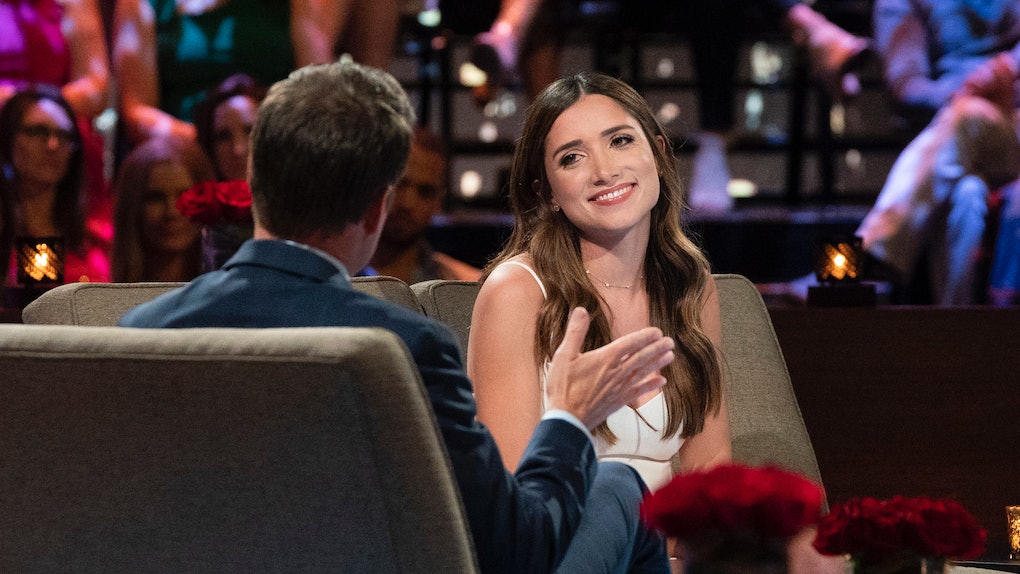 There are always some women on The Bachelor who don't get nearly enough airtime, but "Women Tell All" is a perfect opportunity to get a little more insight into them. Nicole is definitely one of those women this season. Fans watching at home didn't get a chance to see very much of Nicole until the Feb. 4 episode, when she and Onyeka began a feud that would end up getting both of them booted off the show. Onyeka accused Nicole of crying too much, and her tears were even addressed on "Women Tell All." Nicole explained that she's simply an emotional person, but it turns out Halo Top was a little worried about her. They gave Nicole a lifetime supply of ice cream, so that now at least she'll always have something sweet to drown her sorrows in. Bachelor Nation had a lot to say about Nicole's appearance, and these tweets about Nicole on "Women Tell All" can prove it.

Nicole caught fans' eyes during the strength challenge in the second episode of the season. She struggled with lifting weights, mostly because her main experience with exercise was walking her dogs. But even after she dropped the weighted wedding cake on Colton's food, Nicole still went home a winner since she nabbed the wedding cake topper prop that was used in the challenge. That made it clear that Nicole has a sense of humor, and fans on Twitter really appreciate her ability to take and make jokes. Many can relate to Nicole wearing her heart on her sleeve.

Nicole frequently posts pictures of all the yummy food she eats on her Instagram. According to her Instagram, her culinary travels have taken her to eat gelato in Italy, crepes in Paris, and burgers in Los Angeles. Halo Top ice cream seems like a perfect fit for her to continue her snacking adventures.

While a lot of fans on Twitter focused on Nicole's new bounty of ice cream, other fans were still intrigued by her feud with Onyeka. A lot of Bachelor Nation supports the way Nicole wears her heart on her sleeve, even through her tensions with the other women. She told Onyeka during "Women Tell All," "You belittled me, you made me feel ostracized from the group, and you found joy in that."

But, other fans couldn't get behind Nicole and sided more with Onyeka. Like Onyeka, some fans were sick of seeing Nicole cry so much and thought that "bullying" was too strong a word for her and Onyeka's confrontation.

No matter whether you side with Nicole or with Onyeka, it's hard to deny the fact that Nicole ended up the real winner of the whole season since she gets to go home with free ice cream for the rest of her life (OK, one year). And, it might not have worked out between Nicole and Colton, but that doesn't mean it's the last Bachelor Nation will see of Nicole. There's always a chance that Nicole will be back to look for love in a more tropical locale on Bachelor in Paradise.