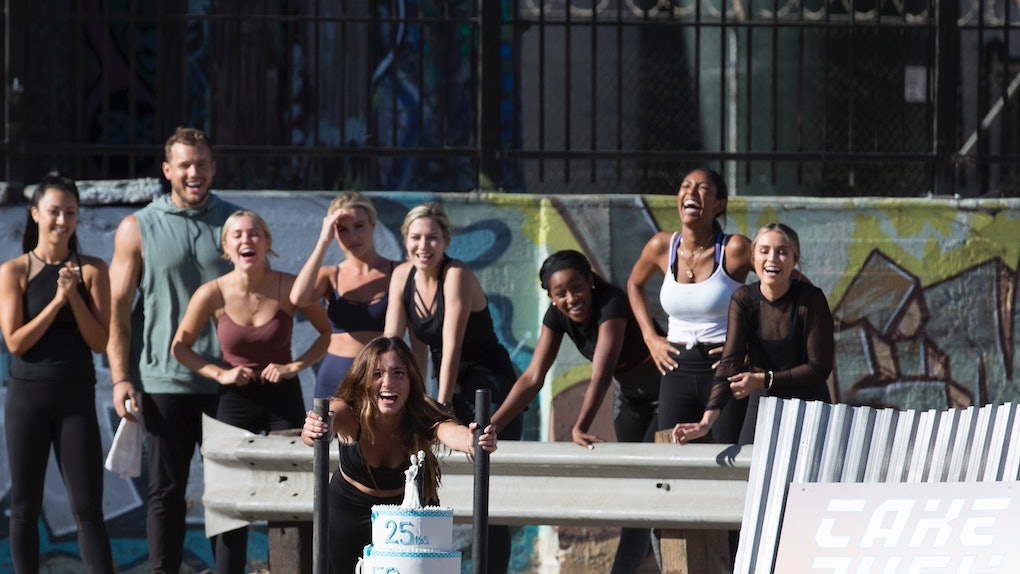 Nicole From 'The Bachelor' Took Home That Wedding Cake Topper, So Prepare To LOL

This season of The Bachelor is is still just getting started, so it's hard to tell who will end up walking down the aisle with Colton. But whether or not she wins, one contestant definitely went home with at least one prize from this past Monday's group date. Nicole from The Bachelor took home the cake topper from the wedding cake made of weights, and she's been updating fans on the topper's fate on her hilarious Instagram.

On Monday night's episode of The Bachelor, Nicole warned everyone that she is not an athlete, a fun fact about her that she's already broadcast multiple times in Instagram posts. When the strength-challenging group date was announced, Nicole said, "It's kind of intimidating. I'm not like the most athletic of the bunch." She did also say that she walks her dog as a form of exercise, but the Bachelor producers had a much more challenging excursion planned. Celebrity couple Terry and Rebecca Crews coached the ladies through a workout routine that included a "Strongest Woman" competition where they had to push 175 pounds of wedding cake down the aisle. True to her un-athletic brand, Nicole struggled to even get the cake to move at all, let alone get it across the finish line.

But it turns out that Nicole struggled even more with the exercise group date than we got to see on TV. On Tuesday, Nicole posted a series of photos and videos in her Instagram story that detailed the great journey that led to her journey with the wedding cake topper.

First, she let fans know that right after her turn with the cake, the topper fell off and the 200-pound cake fell right on Colton's foot.

Good thing Colton's pretty fit, otherwise recovery from an injury like that would definitely be a lot worse. In her Instagram story, Nicole pointed out that the cake topper is on the cake when she's pushing it (backwards, as Chris Harrison pointed out)...

...and then the next time someone tries to push it, the topper is mysteriously gone.

Nicole told her fans that the topper fell off when she failed to push the wedding cake. But, the big shock comes with her next reveal:

Nicole took the wedding cake topper home! This feels huge, like Nicole managed to steal a sacred artifact from a museum. If she were to put it up on eBay, she'd probably have a lot of takers. Nicole then asked Instagram if they thought that she'd be haunted by her Bachelor souvenir forever, and their answer is pretty telling.

It looks like Nicole's fans were right. A few hours later, Nicole posted an update on the haunted wedding cake topper. She first showed them enjoying the pool at what is probably her home in Miami.

Nicole's dog (who she walks as her usual form of exercise!) even made an appearance with the cake topper, and appeared to be very interested in it herself.

Things took a turn for the worse for Nicole's happy topper couple, though. With the Law & Order theme song appropriately playing in the background, Nicole reported that the topper took another fall. This time, there were unfortunately some casualties.

That's right, the bride of the topper was beheaded in yet another fall. Nicole ended her Instagram report on the now iconic wedding cake topper with some very on-brand self-deprecating humor.

Nicole said that she "can't have nice things," but maybe it's just that cake topper's destiny to constantly end up on the ground. The wedding cake topper may not have survived very long at Nicole's home, but Nicole's Instagram is definitely as alive and funny as ever.