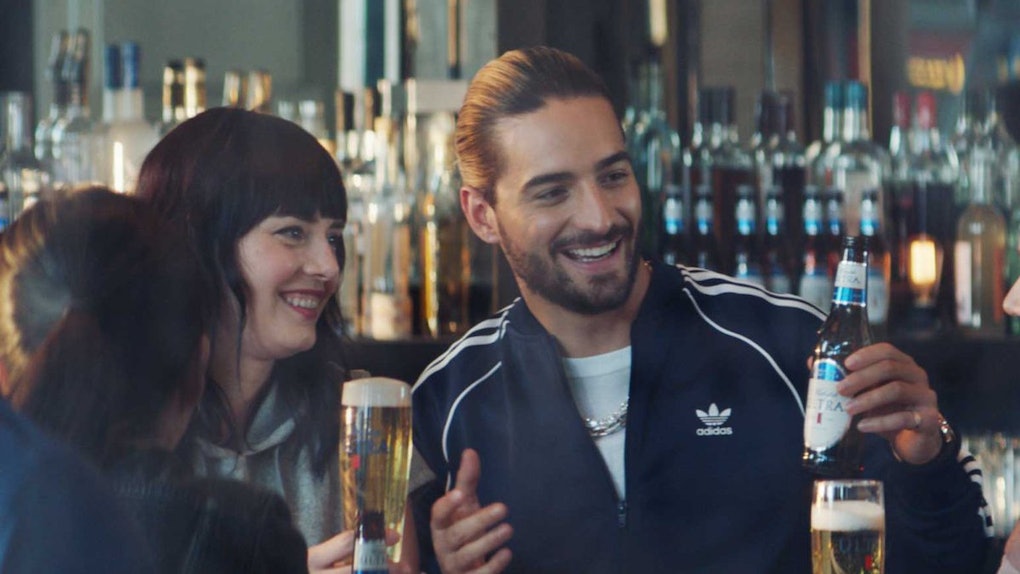 No matter how blah you might feel about the Super Bowl game itself, or even the halftime show, you have to admit that the commercials always catch your attention in one way or another. Whether they're cheesy, actually funny, or just straight-up surprising, they always get people talking. As for 2019's big game between the Los Angeles Rams and the New England Patriots, people can't stop tweeting about Maluma in Michelob Ultra's Super Bowl commercial.

Honestly, if you managed to spot Maluma in the sea of, uh, robots that appeared in Michelob Ultra's Super Bowl commercial, I have to tip my hat to you, friend. The 25-year-old singer's cameo was so quick, I definitely missed it on live TV the first time around. I was probably too busy shoveling chips and guac into my face, if I'm being real with you. But now that I've had a chance to watch it back, I'm loving that the Colombian artist (whose real name is Juan Luis Londoño Arias) had a chance to shine in the spotlight, and fans on Twitter — many of whom couldn't quite believe their eyes when they saw Maluma onscreen — seem to feel exactly the same way.

Some fans felt like Maluma deserved more than just a brief cameo in the Michelob Ultra commercial.

The commercial itself was pretty good overall. The camera cuts between various scenes of robots basically trying to be human and do human things — go to cycling class, go for a jog around the block, play a little golf — and then it focuses on a robot that walks past a bar and looks into the window to see real humans having a few drinks together and enjoying one another's company. Maluma just so happens to be one of those humans, and as the camera pans to him and a few other people, the following text appears on the screen: "It's only worth it, if you can enjoy it" — a pretty ~deep~ tagline, which is actually meant to allude to the fact that Michelob Ultra beer contains no artificial colors or flavors. Not bad for a Super Bowl commercial, right?

I’m so proud to represent my Latin culture during my first-ever Super Bowl commercial. That’s something I’ve always dreamed about and now it’s becoming a reality.

I feel very grateful because I feel like the doors are opening right now for my culture in different ways. The Super Bowl commercial is opening more doors for my culture and I feel very proud to have the Latin flag with me and tell the world that we can conquer the world too.

Maluma definitely seems like a sweet, genuine guy, not just because of his excitement to be part of the Super Bowl, but also because of his adorable relationship with DJ/model Natalia Barulich. The two first met on the set of Maluma's music video for his song "Felices los 4." In an interview with Hola!, Maluma said, "It was love at first sight. She went on with her life, and I went on with mine, but shortly after we started dating."

Now, the two seem to be totally in love. They post about each other on Instagram pretty frequently, with one such heartwarming post from Barulich reading, "This Thanksgiving, I am especially thankful and grateful for the love of my life and our little Julieta. Thank you for your love, kindness, understanding, patience, everything you do in our relationship & our beautiful home. I love you forever my Juan Luis." I'M SWOONING BIG TIME OVER HERE, Y'ALL.

Congrats to Maluma on his Super Bowl cameo, and hey, who knows — maybe we'll see him on the halftime stage pretty soon.