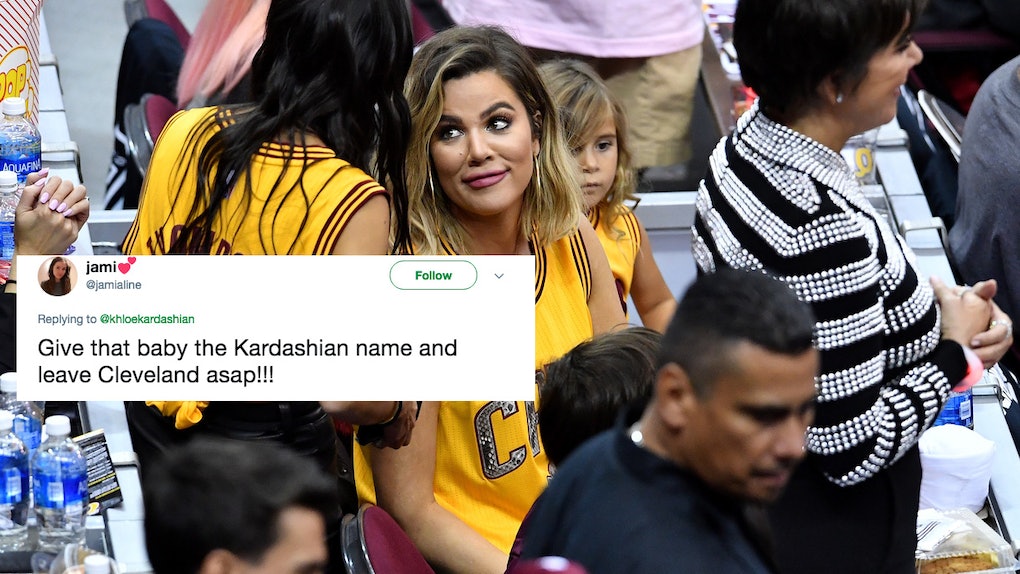 These Tweets About Khloe Kardashian Getting Out Of Cleveland Are Hysterical

Great news, people! Khloé Kardashian has finally welcomed her baby girl into the world. And, yes, the fact that she has brought new life onto god's green earth is a beautiful thing in and of itself, but what people are really excited about is the fact that finally giving birth means Khloé can finally pack her bags and get out of Cleveland, Ohio, (where she moved for baby daddy Tristan Thompson). In fact, people have even taken to Twitter to express just how badly they want her to GTFO. Trust me, these tweets about Khloé getting out of Cleveland are priceless.

For those of you who haven't quite been Keeping Up with this particular Kardashian (ha, see what I did there?), let me provide you with some backstory. Rumors about Khloé's romantic involvement with Cleveland Cavaliers player Tristan Thompson started swirling around in September of 2016. After that, things started getting hot and heavy between the two as they quickly became one of the nation's hottest "it couples." Pictures of the pair flaunting their seemingly perfect relationship were everywhere, from tabloid covers to our social media feeds. In fact, Khloé herself wasn't shy about posting steamy pictures of her and her bae all over Instagram.

In December of 2017, their relationship became even more serious when Khloé took to Instagram to announce her pregnancy, with this picture of her and Thompson holding her tiny baby bump:

She paired the black-and-white image with this sentimental caption:

Just last month, it was reported that Khloé would be moving to Cleveland with Thompson so that she could have their baby there. From an outsider point of view, everything seemed to be going well for the two. That is, until reports recently started swirling around about Thompson apparently cheating on the mother of his child while in New York.

The Daily Mail reported the news just two days ago (in other words, just two days prior to Khloé giving birth to their child) with photos that allegedly show Thompson kissing another woman at a New York City night club; TMZ reported Thompson allegedly brought her back to his hotel with him. Elite Daily reached out to both Kardashian's and Thompson's teams for comment, but did not hear back by the time of publication

While the reports remain uncomfirmed, fans of Khloé have already made up their minds about Thompson. They're unhappy with his behavior and more than ready to get their girl Khloé TF out of Cleveland and away from him once and for all. Just how happy, you ask? Well, take a look at their tweets and see for yourself.

It's time to get the house nice and clean and GTFO, Khloé.

Make sure that baby is a Kardashian and, again, GTFO!

Ugh, so annoying that she had to have her baby in freaking Cleveland for no reason at all.

Congrats, Khloé! But also, seriously, get. The. F. Out. Of. Cleveland.

Luckily, some reports say she really does plan on bouncing out of Cleveland ASAP.

Fans are literally offering to pick her up and drive her back home to Calabasas.

They're also happy to come act as security to tell Thompson he can get his booty out of there.

Maybe this whole thing was a blessing in disguise.

The fact that she has to give birth so far outside of her comfort zone, giving everything that's happened, is so unfair.

Don't walk, Khloé. Grab your baby and RUN out of Cleveland.

Obviously, Khloé will be getting out of there with her own Kardashian-Jenner entourage.

C'mon, Khloé. Make like the Oscar-nominated flick and GET OUT.

Congrats to Khloé on her new baby! Here's to hoping that, no matter what people say on Twitter, she does what she believes to be right for her and her baby.