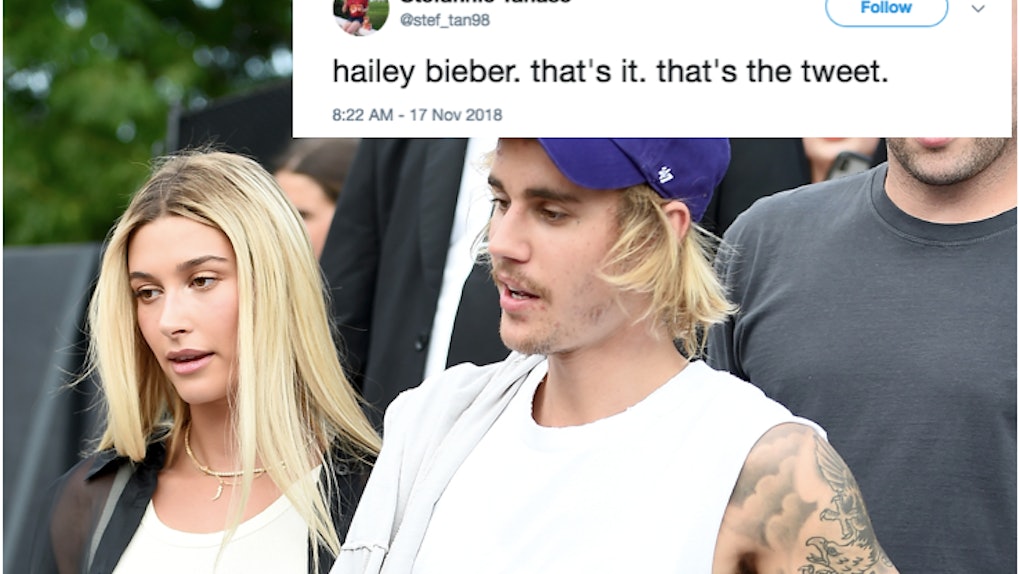 After being coy about their status as a reportedly married couple, Justin Bieber and Hailey Baldwin are now apparently shouting their union from the rooftops, or, more accurately, their social media accounts. And it seems like fans were not ready for the declarations of newly-wed love. Seriously, these tweets about Hailey Baldwin changing her last name to Bieber on Instagram are straight shook by the update. Elite Daily reached out to Baldwin's representation to inquire if she has legally changed her last name to Bieber, but did not hear back at the time of publication.

As of Friday Nov. 16, Hailey Baldwin's Instagram account reads @haileybieber, and in her IG description is says, "Hailey Rhode Bieber," per People. With that IG name-change and recent comments on IG from Justing Bieber, Bieber and Baldwin's now-famous New York City courthouse visit on Thursday, Sept. 13 — which had everybody speculating the pair tied the knot just two months after it was revealed they were engaged — is finally becoming less mysterious. Even though People reportedly confirmed at the time that the pair was legally married, Bieber and Baldwin remained tight-lipped when it came to confirming the reason for their visit. Elite Daily reached out to Bieber's and Baldwin's teams at the time for comment on the marriage reports, but did not hear back at the time of publication.

Cut to two months later, and the newlyweds are sharing their wedded bliss all over the 'Gram. When it comes to Baldwin updating her surname on IG, well, fans might need a minute to adjust to the change. Just take a look at the shook AF tweets for yourself.

For one Bieber-Baldwin follower, news of the name-change was big enough, with no commentary needed.

Others were a bit down to see this married couple become IG official.

The heartbreak among some fans accompanying this name-change is real, you guys.

Other fans on Twitter are stanning the update. TBH, I'm just glad to have some apparent clarity in the are-they-or-aren't-they saga.

It seems like fans are either thrilled or bumming hard about news of Hailey Bieber.

It was only one day prior on Thursday, Nov. 15 that Bieber had fans buzzing when he left shared a post on his own IG account. He shared a picture of Baldwin and himself, and he simply captioned it, "My wife is awesome." Needless to say, those four words had fans reeling at the apparent confirmation of the nuptials.

With that and now, Hailey Baldwin, fans of the young power couple are so here for it.

But still, Bieber stans are coping with their longtime crush being scooped off the market.

Hey, it might be a blow to your teenage dreams that the Biebs is officially sharing his last name with a gorgeous model who is now his "wife," as he calls her on IG, but at least you seem know what is going on with these two now.

All we need next are the wedding photos. C'mon Mr. and Mrs. Bieber, you know you want to share them!

More like this
Joshua Bassett's Instagram About Toxic Masculinity Is A Reminder Crying Is Cool
By Brandy Robidoux
These Tweets About Beyoncé On Netflix's 'Selena: The Series' Are Too Much
By Dylan Kickham
These BTS Suga Quotes For Instagram Captions Are Pure Poetry
By Brandy Robidoux
Stay up to date