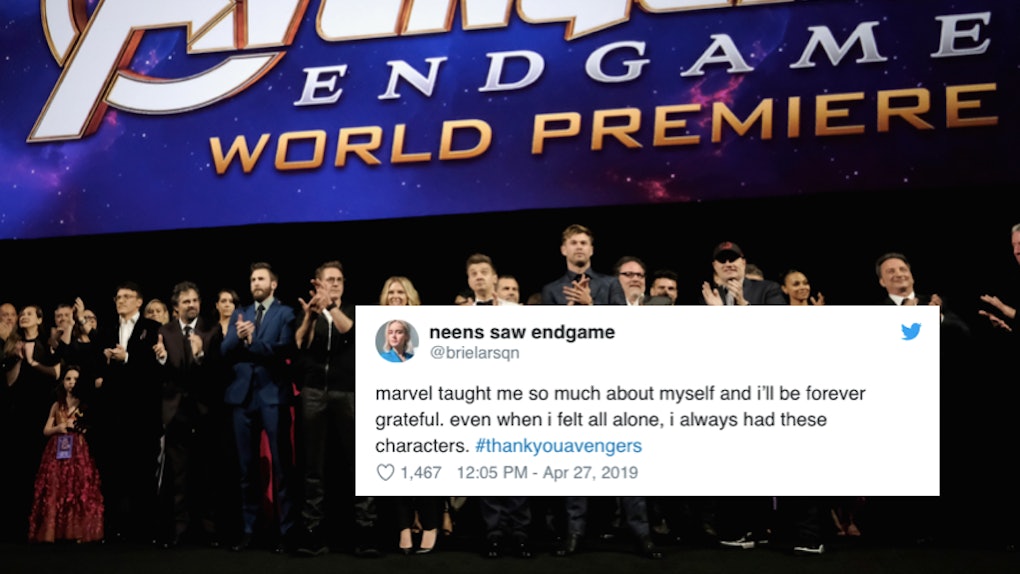 Have you seen Avengers: Endgame yet? If not, you probably want to go ahead and click off of this post. I'll forgive you (this time). The film has endless moments that will have you in your feelings, but perhaps the most emotional scene comes at the end, when Captain America gives up his shield, relinquishing his title and power to Falcon. Since its premiere on Thursday, April 25, the world hasn't been able to stop talking about the moment. But not everyone is sad about it — these tweets about Falcon and Captain America are actually kind of stoked.

I, for one, still don't know how to feel about it, though. If you've cried yourself into delirium and forgot or perhaps you just want a heads up, the moment happens just before the movie concludes. Following the defeat of Thanos, Steve Rogers travels back in time to return the Infinity Stones, but he doesn't come back as quickly as he should. Moments later, Falcon notices an elderly man sitting on a bench a few feet ahead of him, who is revealed to be Rogers. Turns out, Rogers had stayed behind in the Quantum Realm to live life with his love, Peggy Carter, like he'd always dreamed of. Obviously, his Captain America days are over, so he passes the torch — or in this case, his shield — to Falcon.

Not gonna lie, it's pretty hard to swallow.

But fans have also taken to Twitter to express their optimism and gratitude for the characters. On April 27, social media started sharing sweet words about the legacy and future of the Avengers through the hashtag #ThankYouAvengers.

Actor Chris Evans, who has starred as Captain America for the past several years, even caught wind of the tweets. "Some of these #ThankYouAvengers posts are incredibly touching. I’m feeling a deep sense of gratitude today," he wrote on April 27, adding "#ThankYouAvengersFans."

Excuse me for a sec. Suddenly, my eyes are leaking uncontrollably.

And this isn't even the brink of all that happens in the film. Another tragic moment happens just before Falcon and Captain America have their moment, when the Avengers are battling Thanos.

It appears that Thanos and his minions are winning the fight for the Infinity Stones. Thor is beaten, bruised and tired. Captain America is bloodied and battered. And most of the other Avengers are outnumbered by their rivals. After gaining possession of the Infinity Gauntlet, Thanos snaps his fingers to wipe the good guys out of existence, but nothing happens. It's then revealed that Tony Stark, AKA Iron Man, had actually taken the stones and placed them into a glove he created out of his own suit. So he snaps his fingers to wipe away the bad guys, but the power of the stones is so strong that it kills him.

Then the Avengers have to have a funeral for him, where everyone from Nick Fury to Stark's daughter has to say goodbye to him, which is even sadder. But I guess as Black Widow once said:

Besides, it's almost like a new beginning. And it's only a matter of time before the MCU gifts us with another phenomenal flick.