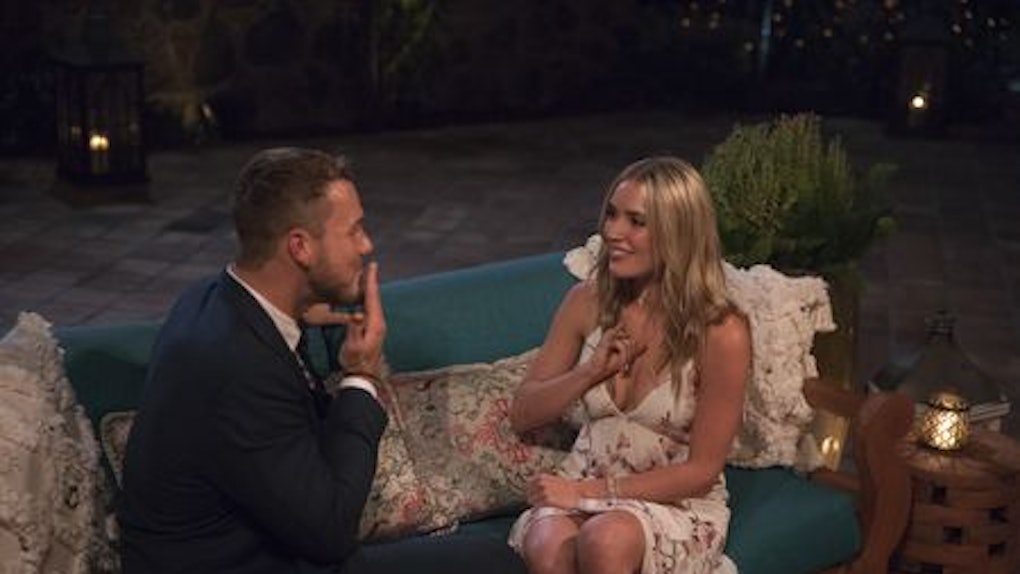 Welp, the Bachelor drama just keeps growing and growing this season, as does the number of women who want to take themselves out of the damn show on their own accord. On March 4's Fantasy Suites episode of The Bachelor, allllllll of that brewing drama came to a head with Cassie and Colton, and these tweets about Cassie and Colton's Fantasy Suite date prove just how disappointed Bachelor nation is about how the date unfolded.

OK, in case you're just joining here tonight, here's the lowdown. It's been pretty clear from the get-go that Colton's been smitten with Cassie. From night one to now, Colton's language surrounding Cassie has pretty much exclusively been about how he's so attracted to her and feels this undeniable connection to her. Cassie has harped on the fact that she and Colton "connect on so many different levels." I mean, they pretty much made out from start to finish on their one-on-one date. Basically, ABC's been positioning these two as end game for the entire season.

Fast forward to their Fantasy Suite date, where things took a turn for the absolute worst they possibly could. What started out as a fun date exploring the streets of Portugal quickly morphed into an emotional sh*tstorm of doubts. Read on to see how Twitter's feeling about this emotional date, and read on even further for a recap of what went down.

The tone during Cassie & Colton's day date during Fantasy Suites shifted when Colton revealed to Cassie that he hadn't received her father's blessing during hometowns to propose to her. This was already a bummer, considering we've heard time and time and time again how important a father's blessing is to Colton, but it's even more of a bummer once we learn how important this was to Cassie as well. Cassie expressed how disappointed she was to hear that her family didn't trust her to make this decision on her own, but hearing that her father was like "nah" seemed to let more doubts about her readiness to be engaged to Colton slip into her mind.

Of course, things got even more complicated (I know, I'm tired, too) when Cassie's dad made a surprise cameo before the night portion of her Fantasy Suite with Colton. For Cassie, however, it seemed like her dad's surprise appearance was a bit of a blessing in disguise, at least in terms of clarity. During their talk, Cassie's dad brought up the honestly valid points that marriage is a lifelong commitment with someone — one that shouldn't be rushed. Cassie then brought up her ~true~ feelings regarding Colton and an engagement, stating she wasn't 100 percent sure she was even in love with Colton, much less ready to be engaged.

And thus prompted Cassie's decision to leave The Bachelor. I know, I know. I feel like Tyra Banks saying, "CASSIE, WE WERE ROOTING FOR YOU!!" But ultimately, she made the decision to save Colton the heartbreak of not being with someone who was fully ready to be with him. What a great plan... that is, if Colton had also been down with that plan. What made the night portion of Cassie and Colton's Fantasy Suite so unendingly dramatic was the back and forth Cassie and Colton then had. While Cassie desperately tried to articulate that she cared for Colton, but hadn't yet fallen in love with him and wasn't ready to be engaged, Colton fought tooth and nail to convince Cassie that he would wait for her.

Unfortunately for both parties — and for literally all of us at home rooting for them — Cassie felt uneasy that she wasn't already falling in love with Colton and still made the decision to leave... but not without Colton's firm assurance that he would wait and fight to be with her, as well as his admission that he loved her. He then walked Cassie to her car, gave her an incredibly long hug for someone who just broke up with him, and said goodbye. That's it, right? That's the end? LOL, of course not.

Even though Bachelor Nation didn't get everything they wanted tonight, they did get one thing they were yearning for: the fence jump. Devastated by this tragic breakup, Colton reacted in a normal-when-you-really-think-about-it-but-definitely-still-freaking-dramatic way: He stormed out of the hotel, made a beeline for the tall white fence surrounding the property, literally hopped right over it, and ran TF away into the pitch-black Portugal streets, leaving Chris Harrison and the producers running after him in the dust.

Unfortunately, this dramatic damn episode ended right there (of course), so we'll have to wait until next week for the Bachelor finale to see how everything unfolds.