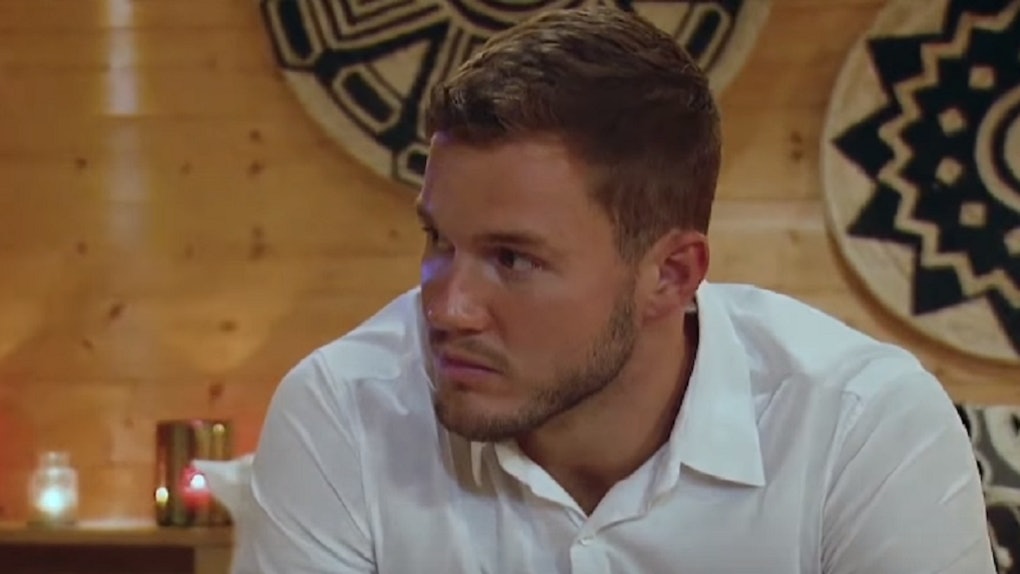 Well, Colton's Fantasy Suites Didn't Go As Well As He Probably Hoped They Would

While Bachelor Nation has stuck around all season to see Colton Underwood jump over a fence, the week everyone has been waiting for is finally here. March 4's episode focused on fantasy suite dates with Colton's three final women and whether or not he would lose his virginity to one of them. Based on promos, we knew something extreme would happen, but Colton's fantasy suites definitely didn't go like he hoped they would.

In Portugal for the special week, Colton reiterated what he's said all season, telling cameras, "I would be ready to lose my virginity if I was in love." He emphasized wanting to have a tender, loving experience with the woman best for him. While his hometown dates consisted of Tayshia and Hannah G. telling him they were falling for him, the uncertain Cassie had remained quiet. This didn't bode well for Colton's obvious attachment to the 23-year-old speech pathologist. Before we saw more insight into Cassie's feelings about getting engaged, it was time for Colton to spend private time with Tayshia, a 28-year-old phlebotomist.

Ahead of her date, Tayshia said, "Being that Colton is a virgin, I would assume he does feel pressure for the fantasy suites. But being physical is a huge part of a relationship and I do want to explore that with Colton just because... I do."

She and Colton later talked about her dad finally giving him approval and all of the "firsts" they achieved together. Colton thanked her for being so open and honest during her hometown visit and pushing their bond to the limits. Tayshia also revealed that her husband was the first person she slept with and that he cheated on her a year-and-a-half into their marriage. Their date certainly consisted of the emotional intimacy that Colton seems to value so much.

Although Tayshia was ready for the next step in their relationship, it seems an even more physically intimate connection wasn't in store for her fantasy suite date with Colton. The two chose to spend the night together, but, according to Tayshia, not having being physically intimate in the way she wanted with Colton still allowed for the deeper connection she wanted. Meanwhile, Colton told cameras that, despite feeling great about their relationship and falling in love with Tayshia, he was still connected to Cassie and Hannah G.

Colton's date with Cassie was next, but those uneasy hometown vibes were back to haunt the couple. Following their cozy daytime date, Cassie's dad showed up to repeat his earlier concerns about Cassie being unprepared for such a huge commitment. Her doubts seemed to grow while Colton gabbed to cameras about how he was in love with her and, if he was to lose his virginity, it'd be with her.

Before meeting Colton for the overnight portion of their date, Cassie admitted she needed to send herself home because of how confused she felt. Telling Colton she loved him but wasn't in love, Cassie's conflicted state eventually led to her leaving the competition, despite Colton's promise he would never stop fighting for her. He then chose to deal with those emotions by launching himself over the famed fence. A night running through Portuguese wildlife probably wasn't how he anticipated fantasy suites to go.

Even worse, poor Hannah G. was left in the dark during this mess. Seeing as the episode ended with Colton ditching the production site, we're not even sure if she'll get a proper overnight date. On the bright side, any heartbreak is perfect inspiration for her next dinner table rap. We'll have to wait and see what's in store for her, Colton, and Colton's virginity after Cassie's unexpected departure.