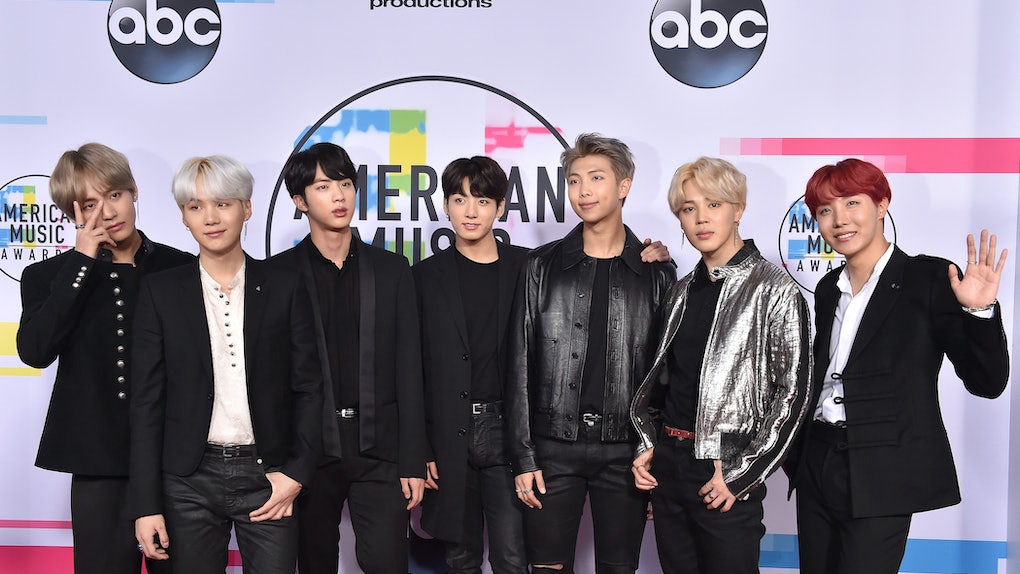 The 2019 American Music Awards kicked off with so many great artists nominated, but only so many awards to dole out. With BTS nominated for Favorite Social Artist, Tour of the Year, and Favorite Duo or Group, ARMYs were really hoping the boys would sweep all three categories. Well, the ballots are in, and the guys did take home some wins – as in, they swept all three of their awards. If you missed the show, here's all you need to know about BTS' 2019 AMAs wins.

The BTS boys had some stiff competition this year. They were up against the Jonas Brothers and Panic! At The Disco for Favorite Duo or Group, who both had amazing years in 2019. As for the Favorite Social Artist category, they were up against all the most viral artists on the internet, including Billie Eilish, EXO, Ariana Grande, and Shawn Mendes.

Fans had high hopes BTS would pull out at win at the AMAs after they didn't win anything at the 2019 People's Choice Awards. And considering the group was shut out of the 2020 Grammy nominations, despite having a record-breaking year, stakes were even higher.

So, BTS' AMAs wins were like a breath of fresh air for ARMYs.

Although they couldn't be at the AMAs in-person, their gratitude was instantly detectable in their acceptance videos.

"Thank you so much! We are really honored to receive such an important and meaningful award. We are so sad we aren't there in person to handle it in person, but we hope to see you soon," they said in their first clip.

"BTS has been a group for six and a half years and throughout those years, we have had so many dreams we have somehow manifested into reality and ARMY, you guys are the ones who made all this possible and we really couldn't have done it without you," they added.

It was all so well deserved and fans are over the moon.

Clearly, a celebration is in order. in it.

More like this
These Tweets About BTS' 'Bang Bang Con 2021' Sum Up The Epic Performance
By Cianna Garrison
These Tweets About Taylor Swift's "Mr. Perfectly Fine" All Ask 1 Important Question
By Sydney N. Sweeney
These Tweets Comparing SuperM's "We Do" To BTS' "Dynamite" Video Are So Split
By Michele Mendez
Stay up to date