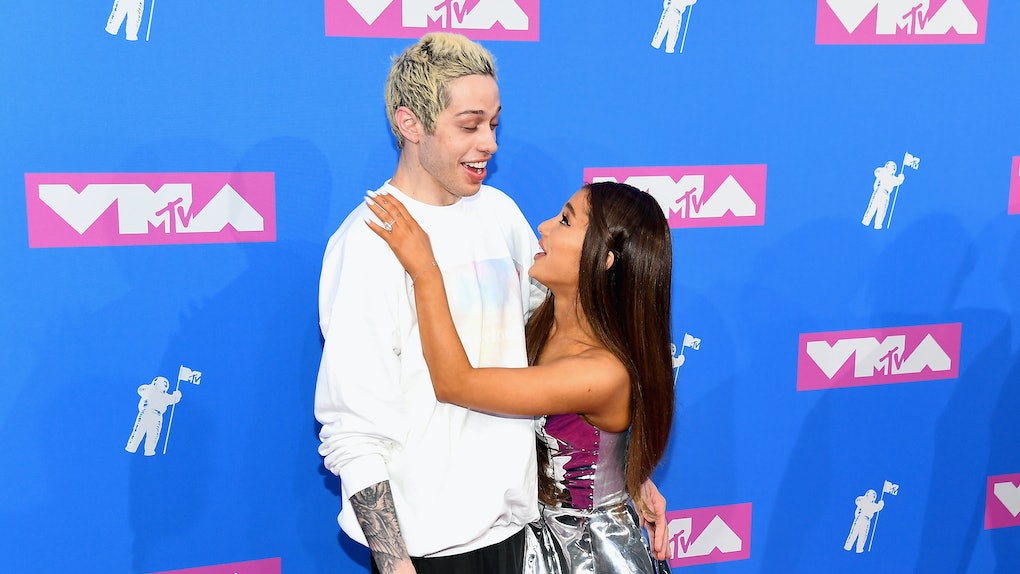 Earlier this week, a troll criticized Pete Davidson's appearance and his beau, Ariana Grande, clearly isn't going to stand for that. So she swept to his defense, and her comments were absolutely perfect. Just glance at these tweets about Ariana Grande defending Pete Davidson — they're nothing but praises.

By now, it should be more than obvious that Grande is ride-or-die for her man, but apparently one critic missed the memo and decided to publicly make fun of the pigmentation around Davidson's eyes. The incident happened on Thursday, Aug. 23, when the blog Barstool Sports shared an article on Twitter titled, "Does Pete Davidson have butthole eyes?"

Grande immediately fired back, pointing out that Davidson suffers from Crohn's disease, an inflammatory bowel disease, which can cause eye problems — including inflammation, dry eyes, and redness, according to the Crohn's & Colitis Foundation. She wrote:

Many people were just as appalled as Grande was, and took to Twitter to praise her for the clapback.

OK, so there were some people who didn't understand Grande's need to defend Davidson.

TBH, I don't see anything wrong with standing up for your partner, especially when they're being made fun of for such sensitive issues. Besides, Davidson isn't just any regular fling — he's her fiancé! If anything, she should be able to stand up for the person she's gearing up to spend the rest of her life with. Y'know?

Unfortunately, the two have fallen subject to massive amounts of criticism since going public with their relationship back in May, whether it was over the song Grande named after her man or all their public displays of affection. The backlash apparently got so intense that Davidson purged his Instagram account of its content, and Grande turned off her comments back in July. A source close to the "God is a woman" singer opened up about their hiatus to People at the time, explaining:

They’re just tired of being attacked. They don’t get why there’s backlash when it’s supposed to be a really happy time for them. Pete especially has been getting a lot of hate from fans. It’s been hurtful, and he’s actually pretty sensitive.

The insider added the couple "doesn’t want drama," and decided it is “easier to cut things off for now instead of being on the defensive all the time.”

Although it's been more than a month since then, Davidson has yet to post anything new to his social media. Grande, on the other hand, at least turned her comments back on, but even that might be a short-term change, given this latest situation.

While I have a feeling that they'll eventually make a full return back to social media, it doesn't look like the criticisms are gonna stop. So get used to seeing Grande defending Davidson's honor, guys — no matter how you may feel about it.

More like this
These Tweets About Beyoncé On Netflix's 'Selena: The Series' Are Too Much
By Dylan Kickham
Olivia Rodrigo's Quote Defending Writing Songs About Boys Calls Out Sexist Remarks
By Cianna Garrison
These Tweets About The 2021 Billboard Music Award Nominations Are All Over The Place
By Michele Mendez
Stay up to date