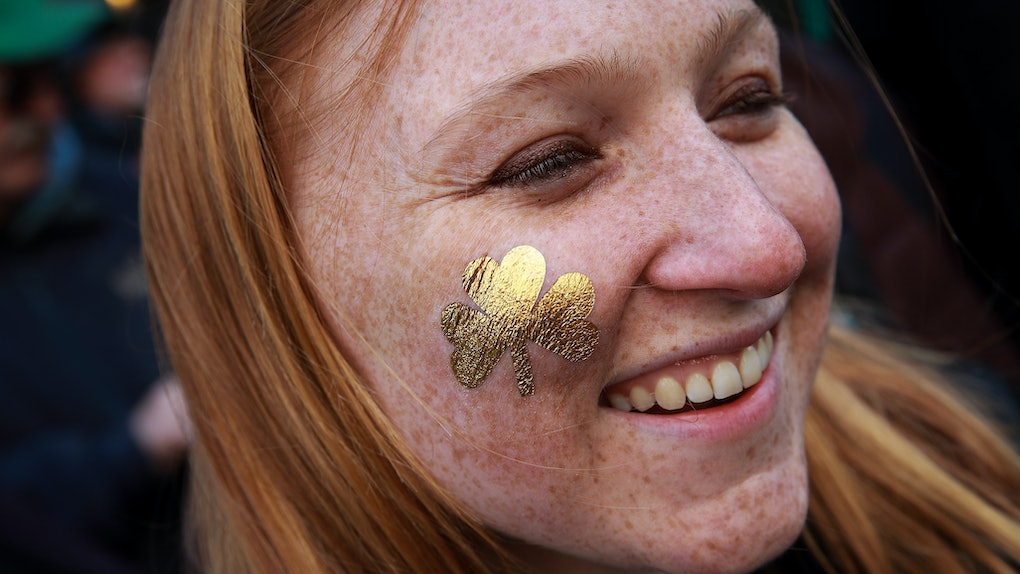 These St. Patrick's Day Traditions For Good Luck Have So Much History Behind Them

As Mar. 17 approaches, you might be thinking of searching for four leaf clovers, or attempting to find that darn pot of gold at the end of the rainbow. But rest assured, those aren't the only St. Patrick's Day traditions for good luck. There are, indeed, other ways you might be able to rake in some of that good fortune for this green-themed holiday, or at the very least, participate in some fun holiday customs that might get you a little luck of the Irish purely by proxy.

First of all, the term "the luck of the Irish," and the cultural association of the Irish with good fortune, was apparently not always a positive one. Edward O’Donnell, an associate professor of history at Holy Cross College, and author of the book 1001 Things Everyone Should Know About Irish American History, told Mental Floss,

During the gold and silver rush years in the second half of the 19th century, a number of the most famous and successful miners were of Irish and Irish American birth.

Over time this association of the Irish with mining fortunes led to the expression "luck of the Irish." Of course, it carried with it a certain tone of derision, as if to say, only by sheer luck, as opposed to brains, could these fools succeed.

But when it comes to St. Patrick's Day good luck, there's also the lucky clover to consider.

According to Jennifer Schultz Nelson, an extension educator in horticulture at the University of Illinois at Urbana-Champaign, the clover has been part of Irish culture dating all the way back to the ancient Druids, who believed that the plant held "special powers to combat evil spirits." And, per Catholic Online, legend says that St. Patrick, the patron saint of Ireland for whom the holiday is named, used the clover in his teachings to symbolize the Holy Trinity. It is believed that part of the reason why St. Patrick used the plant in his teachings was because the plant was already so cherished.

To this day, the clover continues to be an Irish symbol of pride, and it is believed that wearing or decorating with clovers for St. Patrick's Day is a symbol of good fortune.

Another "lucky" tradition involving those pretty little clovers, according to Good Food Ireland, involves doing something called "drowning the shamrock."

The tradition says to drop a clover in your beer or Irish whiskey, drink it all up, then for good luck, throw the clover over your left shoulder while toasting the saint.

The shamrock traditions are pretty simple for any of us to follow, but if you feel like going all out this year to celebrate St. Patrick's Day, perhaps you'd enjoy finding your you way to a little village called Blarney, which is located just outside the city of Cork in Ireland. From there, you'll want to make your way over to the Blarney Stone to give that sucker a good kiss at the 600-year-old castle where this stone is located.

The Blarney Stone isn't just lucky, my little leprechauns. It's actually said to bestow upon you the gift of eloquence.

And hey, that's something we all could use a bit more of — especially the, ahem, writers in the house, amirite?

The website Irish Archaeology can also offer you a few supposed signs of fortune or misfortune to brush up on before St. Patrick's Day. Now, to the modern mind, these may seem a little, well, random, if not even a bit nonsensical. According to the site, these "omens" were apparently collected from students at the Listowel National School in County Kerry in 1938:

If you count the cars at a funeral, bad luck will befall you.

If you burn a pack of playing cards, bad luck will befall you.

If you see a black cat you will be lucky.

If you put your stockings inside-out you will be lucky.

And then, of course, the one that has stuck around for St. Patrick's Day, that all of us know and love: "If you find a four-leaved shamrock you will be lucky."