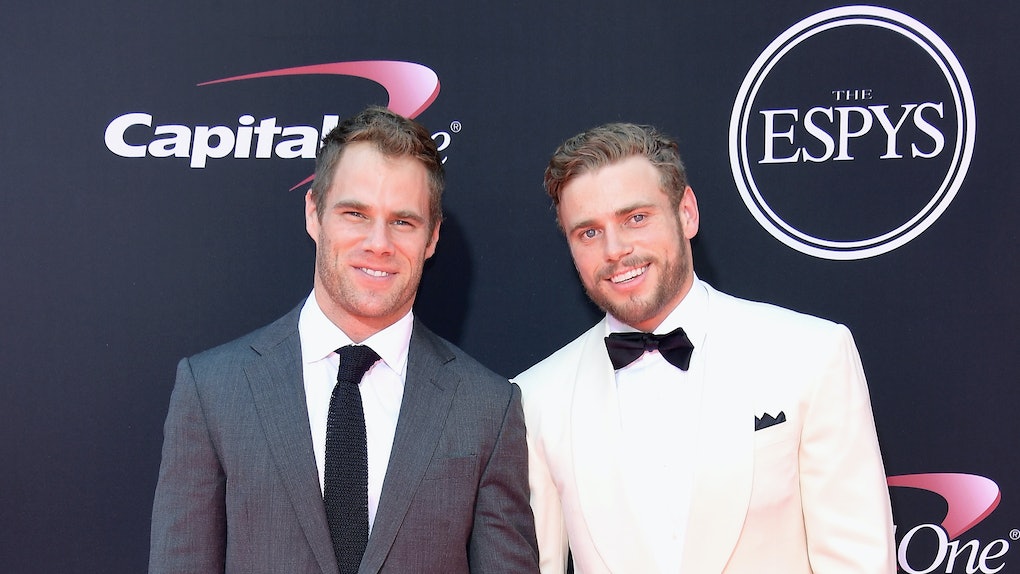 Has anyone else noticed that Olympic silver medalist Gus Kenworthy looks almost exactly like a Ken doll? I mean, it's written in his surname. Ken-worthy (and he's very worthy). From his dreamy eyes to his perfectly coiffed hair, chiseled jawline, and sexier than the Statue of David body, this man deserves the world. And astoundingly lucky boyfriend, Gayby actor Matt Wilkas, is the man to give it to him. Jealous? Join the club. For the rest of us, photos of Gus Kenworthy and Matt Wilkas display envy-inducing love at a whole new level.

If you haven't been following the 2018 Pyeongchang Olympics lead-up, you should know that Kenworthy is a UK-born, Colorado-raised, freestyle skier, who was also the first action sports star to come out as gay, in an October 2015 ESPN interview. A million times yes to the bravery of a man who can find the freedom to openly be himself, despite being a part of an industry that is mostly buttoned up.

He's proven to be a guy who always goes after what he wants, in both his personal and professional life. Case in point? Kenworthy first approached now-partner Wilkas via Instagram, which they recounted to OUT. Wilkas wasn't entirely receptive at first, so a year later, Kenworthy reached out again. Hella bold, but it obviously worked. They've been together ever since.

Excuse me while I gush, but these two men are so gorgeous and so in love. I challenge you to find one photo of the couple that is less than perfect.

Kenworthy captioned this super creative shot, "Heels over head." Cute, guys. But also, how the heck did this photo happen? What witchcraft is this? (Teach me, please.)

They get stoked for movie night.

And their snack selection is really on point.

Wilkas might've even made that quote from The Notebook his own.

I can only assume that the caption on this post, "🌯🌯," means, "If you're a burrito... I'm a burrito." Who wouldn't rather be a delicious burrito than a bird? Sorry, Ryan Gosling. (I still love you, too.)

Since they accomplished #RelationshipGoals already, they started creating new #goals...

One word: flamingoals. And what an awesome goal to have, honestly. I'm bewildered by how no one has thought of it before.

A picture is worth a thousand words, but the caption on this photo is worth so much more.

Horseback riding on the beach is the epitome of romance, but there's more than just a drool-worthy photo here. Wilkas explains that the reason they have their shirts off (not that we were upset about that...) is because Kenworthy's thighs were chaffing, so he gave him the shirt off his back to wrap around them. Someone look up "love" in the dictionary. That has to be the word-for-word definition, right?!

How is it possible that these photos just keep getting better?

Like, Kenworthy and his mom teaching Wilkas to ski? Come on, it's too cute. It is actually too cute.

I'm questioning every relationship I've ever had, now.

This sweet candid moment is all any of us want.

Deep breaths, everyone. Looking at all those photos was a literal spiritual experience. I'm going to go talk myself off of the "I will never find a love like this" ledge before the Olympics air from Feb. 9 to Feb. 25, 2018 on NBC.