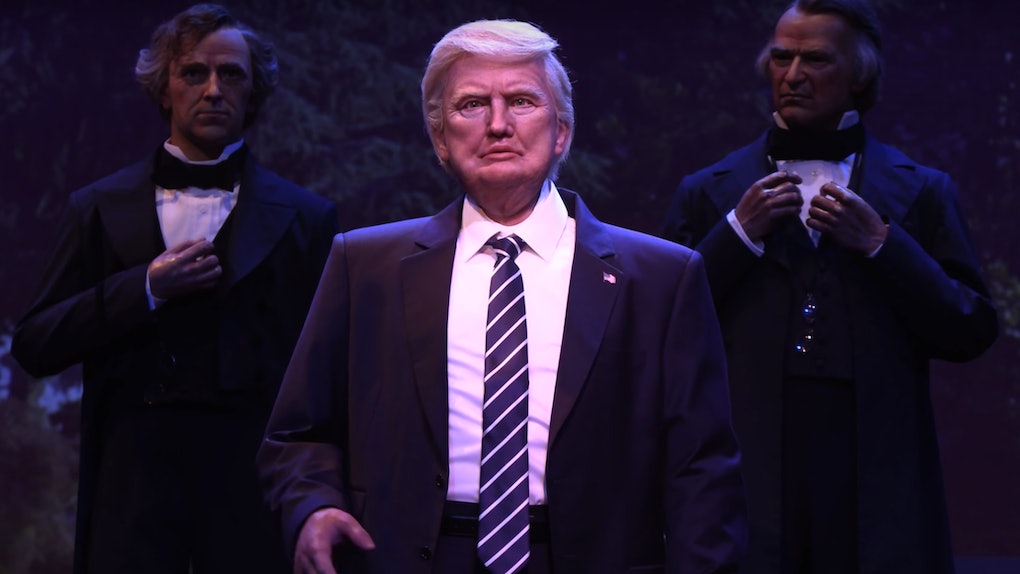 Disney fans everywhere were shook as all hell when Donald Trump finally made his appearance in The Hall of Presidents at the Magic Kingdom. The attraction had been shut down for over a year, and it seemed like it might never open again. It was as if the world might never get to see animatronic Trump in the flesh. Nevertheless, on Dec. 19, he made his debut, and let's just say animatronic Trump has a face we'll never forget. Now, Twitter user @bornmiserable has shared these photos of Trump's robot head photoshopped onto his pics, and they are truly terrifying.

When the animatronic made its first appearance, it got its fair share of criticism from Twitter. Some people were saying the robot Trump face looked more like Jon Voight. Others have circulated something of a conspiracy theory, which suggests that Disney Imagineers were hopeful of Hillary Clinton winning and started on her. Then, when the election night results came in, they had to quickly scramble and change the face to Trump's. The end result of this theory is a mashup of Clinton and Trump in one very odd-looking robot face.

No matter what you believe or how you feel about animatronic Trump, we can all agree the face is a little creepy — OK, maybe a lot creepy. Despite petitions to make the Trump robot silent and a protestor chanting "lock him up" during the show, Donald Trump's animatronic is here to stay at the "The Most Magical Place On Earth." It's not a very magical looking animatronic, so it's nice to find a little humor in such a terrifying sight to see. That's why we're dying over these photoshopped pictures from Twitter user @bornmiserable. He's taken some photos of real-life Trump we've seen before, and replaced his head with robot Trump's. After getting over the initial scare, you might be able to laugh at how ridiculous it all is.

Like, remember that time animatronic Trump made an appearance on The Tonight Show and Jimmy Fallon played with his robot hair? No? Well, here it is:

Or, how about all those golfing trips Trump keeps taking? We can't forget those, and here we have animatronic Trump casually standing on the fairway. He definitely looks like he's having a great time.

Even though these photos scared us half to death the first time we saw them, we're actually starting to like animatronic Trump way more than regular Trump. If only we could send the robot version of Trump out into the world to carry out all the presidential duties. Heck, maybe even the Donald would be down with that! It would definitely give him more time to tweet about real pressing issues, like global warming apparently not being a real thing. Just imagine a world where animatronic Trump gets to go on foreign trips instead of the real Trump.

Who knows, we might even have better foreign relations if we sent over a robot Trump. And while we're at it, we could even have robot Trump give all the speeches for real Trump! It would probably just be the pre-recorded speech that guests can listen to when they visit The Hall of Presidents attraction at Walt Disney World, but I'm sure it'll work anywhere.

The sheer thought of a world where animatronic Trump is the president kind of sounds like a way better version of reality overall. Maybe we can somehow find a way in 2018 to convince the real Trump that this is a good idea, and he'll hand over the reins.

Thank you, @bornmiserable, for sharing these photos. At first, we were scared, and then, we laughed. Now, we are hopeful. We truly went through a range of emotions there, which is something our dear friend animatronic Trump can't do. We'll leave you with these final photos of animatronic Trump replacing real life Trump, just because we can.