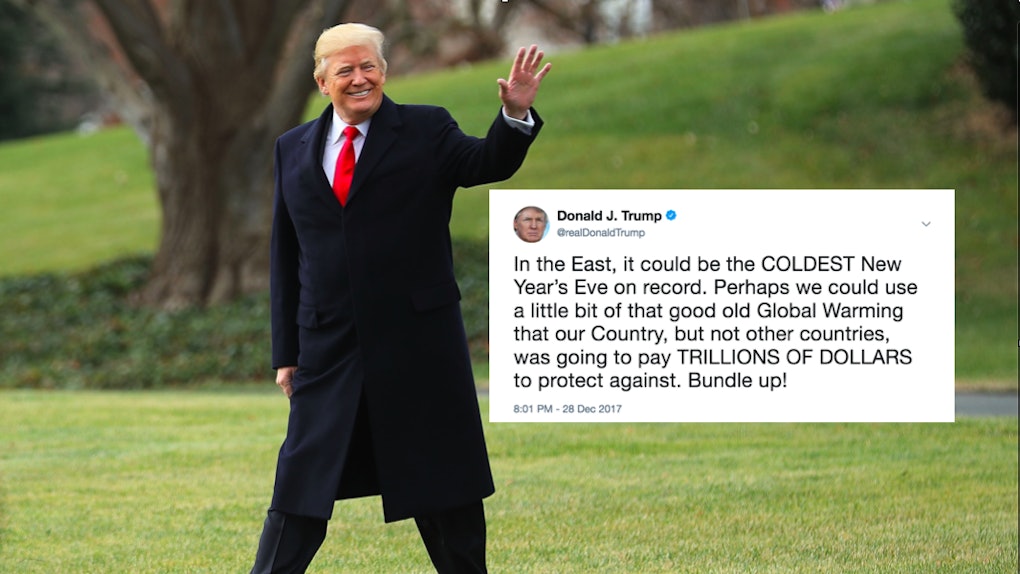 During his holiday vacation at Mar-a-Lago, President Donald Trump took time from his getaway to moonlight as a meteorologist, and his commentary had Twitter in an uproar. On Thursday night, Dec. 28, Trump tweeted about "good old global warming," sarcastically bringing up the ice cold temperatures up and down the east coast ahead of the New Year, and suggesting once again that climate change is a hoax. The president wrote, "In the East, it could be the COLDEST New Year’s Eve on record. Perhaps we could use a little bit of that good old Global Warming that our Country, but not other countries, was going to pay TRILLIONS OF DOLLARS to protect against. Bundle up!"

Trump's tweet — and, specially, his mention of money — was a clear allusion to the Paris Climate Agreement, an international pact that the United States agreed to under former President Barack Obama, but exited after Trump entered the White House.

Now, pretty much everyone (who isn't trolling) knows that the conversation around global warming is more complicated then the way Trump made it seem. As far as convincing arguments to debunk the impact of climate change go, a few days of cold weather isn't one of them. Trump probably knows that himself. Few things in life are black-and-white like that, anyway.

But, alas, the man trolls. And when he trolls, Twitter lights up.

British actress Ellie Goulding was among the people who had the most notable responses. "If you paid ANY attention to science you might learn why this IS a sign of global warming," Goulding tweeted. "There’s a reason why every single country is taking it seriously. We will continue to ignore you."

Chelsea Handler, no big fan of Trump, also jumped into the mix. "Hey dumbass, global warming doesn’t only mean extreme heat; it means extreme weather. Hot and cold. Maybe buy a thermometer and shove it up your ass," Handler tweeted on Thursday.

Trump has long been a critic of the science that concludes global warming poses a threat to the world. His history of expressing his skepticism through tweets is well-documented, too.

The president was also an even greater critic of the Paris agreement he exited in the summer, which he said was an example of other countries taking advantage of America.

"At what point does America get demeaned? At what point do they start laughing at us as a country?" Trump asked while announcing the United States would no longer cooperate with the agreement.

He later added, "We are getting out. But we will start to negotiate, and we will see if we can make a deal that’s fair. And if we can, that’s great."

Trump's tweet on Thursday night didn't just prompt responses from people in Hollywood, though. A Democratic lawmaker took exception with the president's tweets as well. In fact, Congressman Don Beyer (D-VA) outlined a list of points to combat the president's tweet. Here's what he had to say:

1: This isn’t how climate change works. 2: We weren’t paying trillions of dollars. You didn’t understand the Paris Agreement in June and you still don’t. 3: Climate Change is real. It is a serious threat to our children. You need people on your team who can explain this to you.

An underrated factor in all of this? Trump is tweeting this while taking time off in South Florida, where he's been enjoying plenty of sun at his golf course, among other places. In other words, the president, and leader of the free world, is engaging in expert levels of trolling of people fed up with a cold wave.