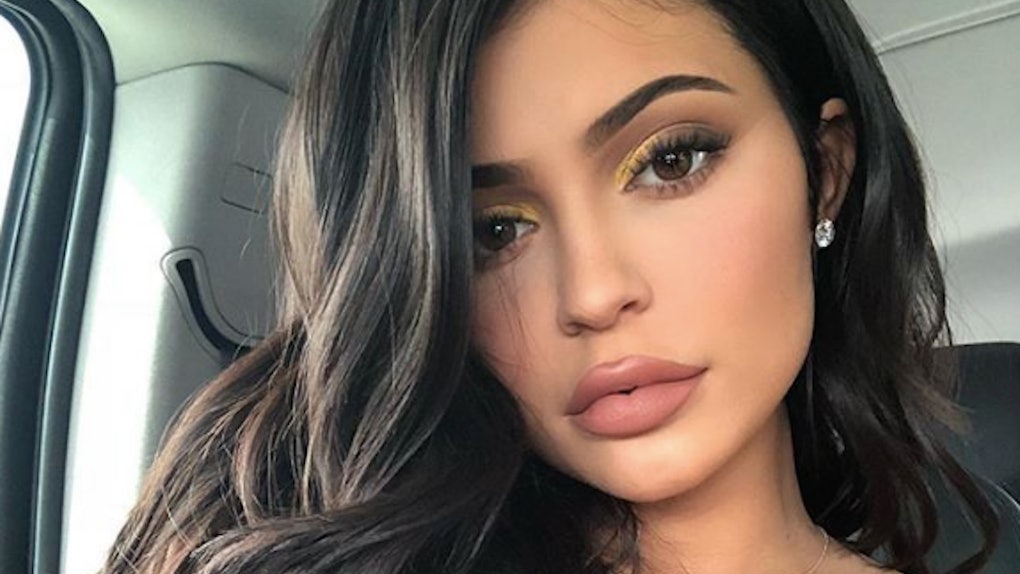 Kylie Jenner made a big change to her look recently. In case you missed it, homegirl removed all of her lip fillers! That's right, the iconic Kylie pout that launched the Kylie Lip Kits is no more, but the makeup mogul still looks as gorg as ever (not that the size of her lips would ever change that). Jenner got to attend a screening of The Handmaid's Tale season two finale on Monday, July 9, and the new photos of Kylie Jenner without lip fillers at this event are such a new look for the new mom, but I'm here for it.

Kylie Jenner revealed to the world on July 8 that she decided to remove all of her lip fillers. She started getting temporary lip fillers several years ago and after months of not confirming the rumors (gee, sounds familiar), she confirmed in a 2015 episode of Keeping Up With The Kardashians that she did, in fact, get fillers. I mean, it was pretty obvious that she did, but the confirmation was thrilling nonetheless.

Jenner posted a photo of her and Stassie Karanikolaou to Instagram on July 9 that was seemingly taken before they went to the Handmaid's Tale screening.

At the screening, she posed with Serena Joy and Rita themselves (Yvonne Strahovski and Amanda Brugel, respectively) and the Handmaid stan in me is screaming.

At first, I was so wired into staring at Jenner's new look that I didn't even realize Serena Joy and Rita were in this photo. What a shot. What a night. What a time.

Jenner revealed on Instagram on July 8 that she "got rid of all" her fillers.

One fan commented on a photo Jenner posted of her and Stassie Karanikolaou and said, "she looks like the old Kylie here idk why." Jenner responded to the comment and said, "i got rid of all my filler" with two shocked emojis and a smiley face.

Fans were shocked by Jenner's choice, given that her makeup empire was launched by her famous pout that was achieved through lip fillers, but they're definitely supportive nonetheless.

Kylie Jenner sans lip fillers was the last thing I thought I'd see in 2018, but here we are.

Dr. David Schafer, a New York City-based plastic surgeon, spoke with Elite Daily about the process of having lip fillers removed/dissolved. He says the fillers need updating about every six months, but doctors usually won't update the fillers when a woman is pregnant.

Dr. Schafer says Jenner could have either let the fillers dissolve naturally and just not get them touched up, or she could have had them "melted," essentially. "While hyaluronic acid (the ingredient in lip fillers, which lasts about 6 months) naturally dissolves over time as your body metabolizes it," he tells Elite Daily, "it is also reversible. An injectable enzyme called hyaluronidase can 'melt' the filler almost instantly."

Jenner's current lip sans fillers still look plumper than they did before she ever started getting injections, however, so how do her lips still look like they have injections? Well, it's not clear whether Jenner had all of the fillers removed or if she only had some removed in order to accomplish this look, but Dr. Schafer notes that her pregnancy might have played a part in how her lips look naturally now. "You don’t need filler touch-ups during pregnancy because of excess swelling, otherwise known as edema, which is a very common side-effect of pregnancy," he said. "The body is working overtime to double its blood and body fluid to support the developing baby, so when pregnant women retain fluid, it can cause swelling in legs, face, and lips."

Whatever the minute details of Jenner's lip decision may be, homegirl is still slaying. Under his eye.