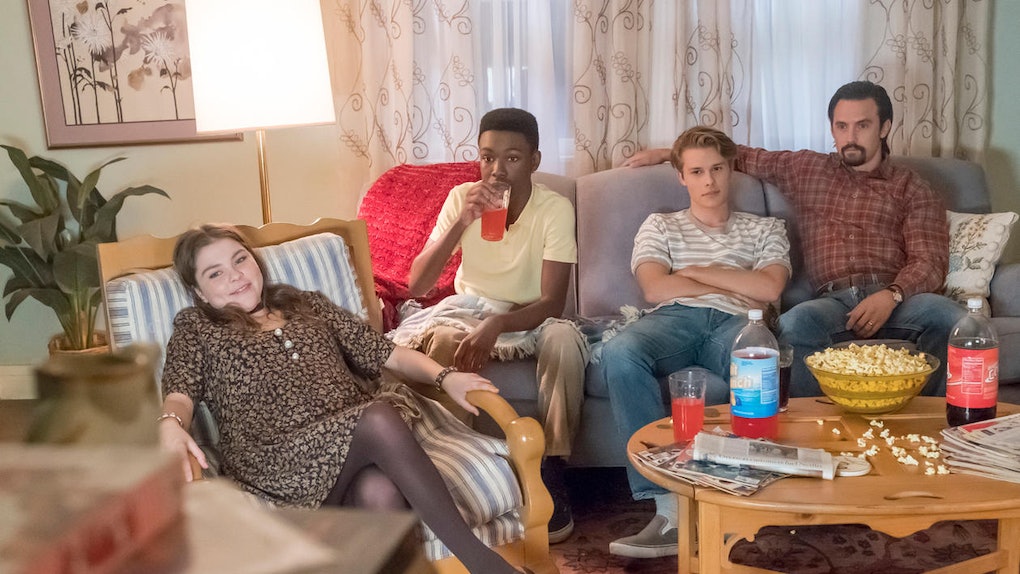 This Is Us has done what was seemingly impossible for recent network television by attracting everyone and their mother to its feel-good, weepy storylines about the past, present, and — as of recently — the future. We're all in love with the Pearson family and, thanks to recent cast appearances at the SAG Awards and Golden Globes, the actors behind these beloved characters are becoming just as admired. While you're recovering from this week's double dose of episodes, you may appreciate these five fun facts about This Is Us that will only get you antsy for the show's post-Olympics return on Feb. 27.

From coincidental cast connections to heartwarming little details, it's no surprise that these actors have created a warm, family-like atmosphere behind the scenes. Knowing such coziness exists may just help me cope with Jack's death and the emotional funeral that followed (as long as I don't rewatch any episode clips, that is). Since the Pearsons are, you know, fictional, can the cast as a whole just adopt me? I even promise to be the This Is Us set's coffee runner if necessary.

Now, excuse me while I smile over these fun little facts and start counting down the days until the show's back.

Appearing as Yvette in Season 1's "The Pool," as well as two other episodes, Ryan Michelle Bathé has been married to Brown since 2007 and has two sons with him. Proving that Brown is seriously just a real-life extension of Randall, the two were initially college sweethearts while studying together at Stanford University. Both of them also received their MFAs from NYU. Clearly, the couple that gets degrees together stays together.

You may have caught sight of Bathé soaking in the moment when Brown won his SAG Award in January and gave her a sweet shoutout:

I love actors so much I decided to marry one. Ryan Michelle Bathé, you're the best scene partner a brother's ever had.

Although it was hinted that the friend teenage Randall visited at Howard University was Yvette's son, we haven't seen her on the show lately. Maybe she'll come back when the show explores the Big Three's high school graduation?

Before she scored the role of a lifetime, Metz worked as an agent, and now-20-year-old Hannah Zeilie was once one of her clients. Speaking to The Hollywood Reporter about the interesting coincidence, Metz said:

I actually used to represent her when I was an agent. It's full circle. Life is so crazy. I've been a huge fan of hers for as long as I've known her. I actually didn't know she sang. It was just so perfect. She plays that angsty, sarcastic, funny teenager so well. And she's such a love in real life. I just love her as a person. We're friends.

In a digital exclusive about the actors who play the younger Big Three, Zeile also spilled about their connection:

I saw [Metz] in the makeup trailer here, she was like, 'This is so weird, I totally remember looking through your headshots,' and I was like, 'oh my gosh, I'm playing you, this is so crazy.'

Ventimiglia appeared as the Rocky star's son in the 2006 film Rocky Balboa, and although the two didn't see each other often afterwards, Stallone always insisted that Ventimiglia could call him anytime with any request. When the production staff began hinting that they had Stallone's essence in mind for Kevin's movie costar, Ventimiglia knew what he had to do:

There’s a movie star, a movie idol, that Justin [Hartley’s] character is going to be working with, and when I’d heard what the episode was going to be and everything, they just kind of looked at me and they said, 'Yeah, someone liked Sly.' And I’m like, ‘Cool.’ And they go, ‘Do you think he’ll do it?’ And I went, 'I don’t know.’ And they just kept looking at me, and I’m like, ‘Oh—you want me to call him?’ I basically called with, ‘Here’s something that might be fun, and I’m sorry you and I aren’t going to get at lot of screen time together, but I want you to know how much this impacts my character.’ Because if you imagine that Sylvester Stallone is Kevin’s movie idol, it’s got to come from somewhere... Maybe his dad goes through some pretty tough times and always goes back to that underdog story of the first Rocky.

Leave it to Papa Pearson to make things happen.

4. Sterling K. Brown And Susan Kelechi Watson Were At NYU Together

In an interview with Entertainment Weekly, the onscreen spouses revealed that, while they didn't really know each other at the time, their time in NYU's MFA program overlapped. Brown's on-and-off-again relationship with Bathé was so notorious then that Watson said she really only remembers Brown collectively with his future wife. As a student, Watson admired Brown for still delivering amazing theater work after appearing on TV, while Brown knew of her through a classmate she was dating then:

I remember Sue before she even got to school was dating a guy in the class above my class. And so I’m all, 'Who’s this little cute girl who Dre is going out with?' They’re like, 'Yeah, that’s Susan Kelechi Watson.” I was like, 'Oh. She’s cool.' ... I just remember watching [Watson] in [her] process do incredibly beautiful and nuanced work, and just being a fan of [her] talent.

They weren't exactly college-aged when they first met, but Brown and Watson knowing each other through NYU just makes Randall and Beth's background as college sweethearts even cuter.

The Season 1 finale detailed how Jack and Rebecca first laid eyes on each other when Rebecca was performing the Cat Stevens song "Moonshadow" at a bar. It was an amazingly poignant moment that was the polar opposite of the episode's paralleling storyline of the couple's huge fight in the 1990s. Perhaps only hardcore Mandy Moore fans know that the actress originally covered the song on her 2003 album Coverage, which consisted of several cover versions of songs from the 1970s and '80s. So, yes, Mandy Moore is a physic who could totally foresee Rebecca Pearson's future artistic vibes.

Also, is there anything more 2003 than Moore's haircut in this music video?