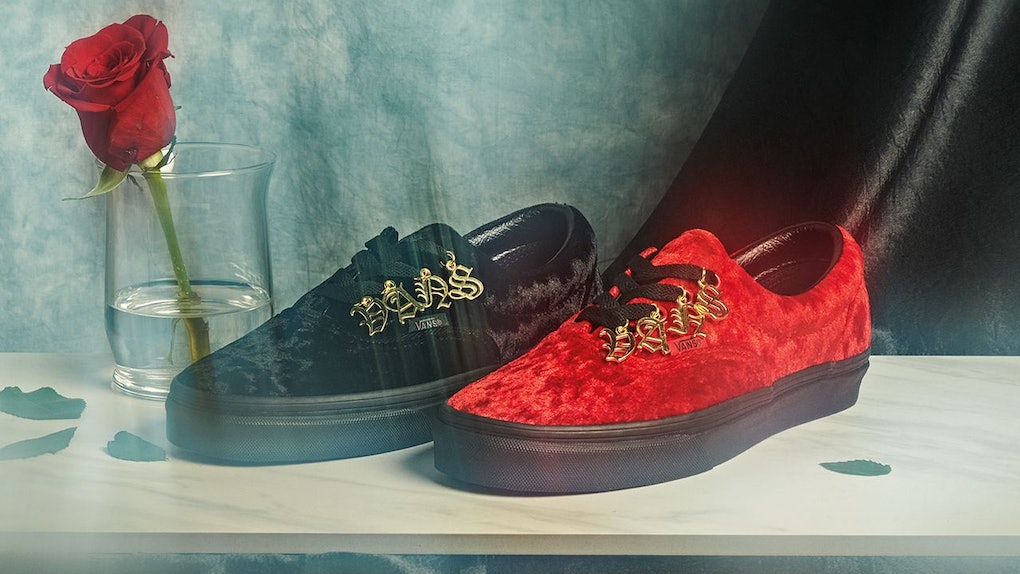 There's a new sneaker on the scene and it's one of the most surprising styles to arrive this year so far — but not for the reasons you might think. Two colors of crushed velvet Vans were just released and while their silhouettes are nothing new (the Vans Era style has been around for a long time and is a brand classic), their material certainly is. I know what you're thinking: Crushed velvet?! For summer? Your internal questions mirror my own. And yet for some reason, I can't help but to be weirdly into the luxe new styles, even if velvet is typically a fall or winter material. If Dracula wears lavish pieces in black and blood red tones year round, then I guess I can too.

As mentioned, both sneakers within the pack are reimagined takes on the iconic Vans Era silhouette. The first style arrives with a cherry red crushed velvet upper, black laces, a black footbed, and matching lining. Thanks to the contrast between the two hues, it's a shoe that really pops and will definitely turn some heads on the street. If you've been looking for a sneaker that's unlike anything else you own and boasts a decidedly punk rock appeal, this one is definitely it.

The next style is all-over black, with an inky crushed velvet upper and a matching sole, footbed, and laces. It's a great option if you're looking for something slightly more subtle that still boasts an unexpected softness and sheen and would be decidedly easier to style on the daily than the red pair.

The standout aspect of both pairs is of course the gold lace charms. Spelled out in a gothic font, "Vans" dangles along the outside of each shoe, adding shiny ornamentation that screams throwback cool. The decorations are reminiscent of nameplate necklaces and days when charm bracelets were all the rage, which makes sense seeing as everything 2000s is once again in style. Even if you're not into these specific styles, let them serve as inspirations and encourage you to explore lace charms once again. Kylie Jenner recently revived hair charms with a bang at Coachella, so there's no doubt the footwear versions will get a second wind too.

The above styles arrive in a pack with two additional shoes, which see the Vans Slip-On style getting its own vampirish update.

Like their lace-up counterparts, both styles boast gold ornamentation, but theirs take shape in the form of ID chains. The black style's chain features a checkerboard pattern, while the red styles' features a checkerboard pattern and text. The hardware makes the shoes look slightly loafer-like and a bit more dressed up than usual, so if convenient cool is what you're after these styles are perfect.

You can shop both the Era and Slip-On styles at Vans.com now, with both silhouettes retailing for $70.