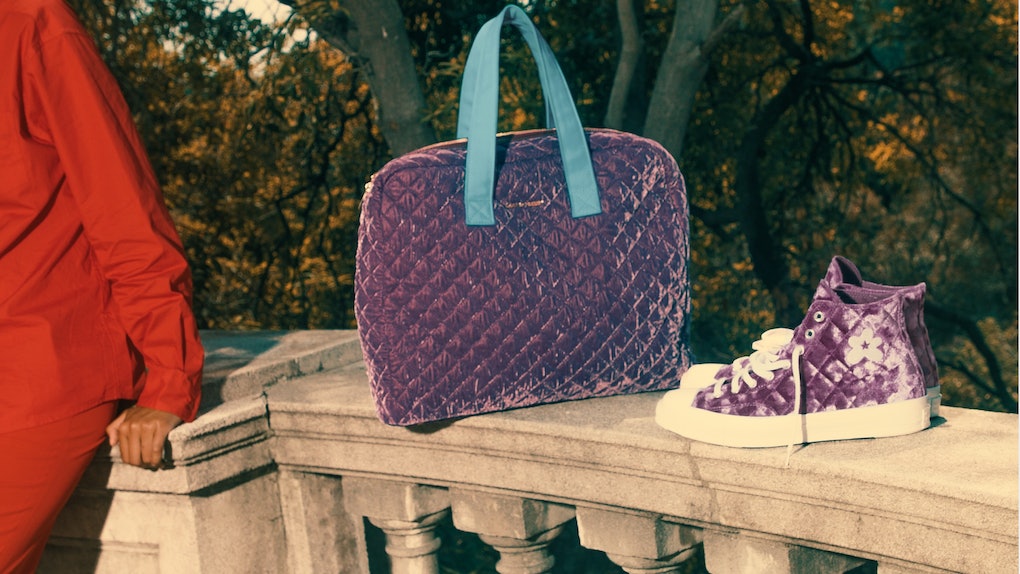 If you thought opulent fabrics in jewel tones and metallics were just for autumn and winter months, think again. An upcoming pack of Converse x GOLF le FLEUR* quilted velvet sneakers is about to change everything you thought you knew about seasonal dressing, all while bringing an entirely new look to two silhouettes of Chucks that you know and love. They're totally unexpected and definitely a bit out there (in the best way, of course), but would you expect anything less when Tyler, the Creator, the arbiter of quirky cool, is involved?

The rapper has been collaborating with Converse on sneakers and apparel ever since announcing a partnership with them in 2017, much to the delight of Converse and Golf Wang fans alike. (Tyler, the Creator launched the latter brand in 2011.) footwear releases always feature a signature GOLF le FLEUR* flower somewhere on the shoe and while they're usually uber bright, there have been some more muted designs in the past. Take, for example, the burlap pack, which was released at the end of 2018 and saw the classic Chuck Taylor and One Star styles get a textured brownish revamp a la those potato sacks you used to race in as a kid. While undeniably cool (Tyler's creative brilliance is unreal), the shoes weren't really my style, which makes the fact that these new velvet ones are right up my alley that much more exciting.

The velvet capsule collection includes the same two classic silhouettes as the burlap pack but instead of a scratchy makeover they arrive feeling super soft. That's right, you can now snag both the One Star and Chuck 70 silhouettes in quilted velvet form and get in on what are possibly two of the most lush sneaker styles ever, because sometimes you've just got to be extra from head to toe, okay?

Both silhouettes are available in three equally opulent color ways that might remind you of the robes and dresses worn by Renaissance kings. There's a glossy light brown, a royal purple, and a bright burgundy. All three hues boast a white sole, which provides a modern and grounding contrast.

Depending on what you like, you can either rock classic white laces to match the soles of both styles and the rubber toe caps on the Chuck 70, or you can opt for velvet laces in a matching hue for an especially rich look. The Chuck 70s boast silver hardware, while the One Stars forgo metal details altogether.

To finish each shoe off, it's adorned with a monotone Tyler flower motif for a subtle yet special detail and is embroidered with GOLF le FLEUR* branding on the tongue.

What do you think? Fit for modern royalty, right? If you want to get your hands on a pair you'll have to wait a few days until they officially launch. Starting May 17, you'll be able to snag them globally at Converse.com and Golf Wang Stores (@golfwang), with prices ranging from $100 to $110.