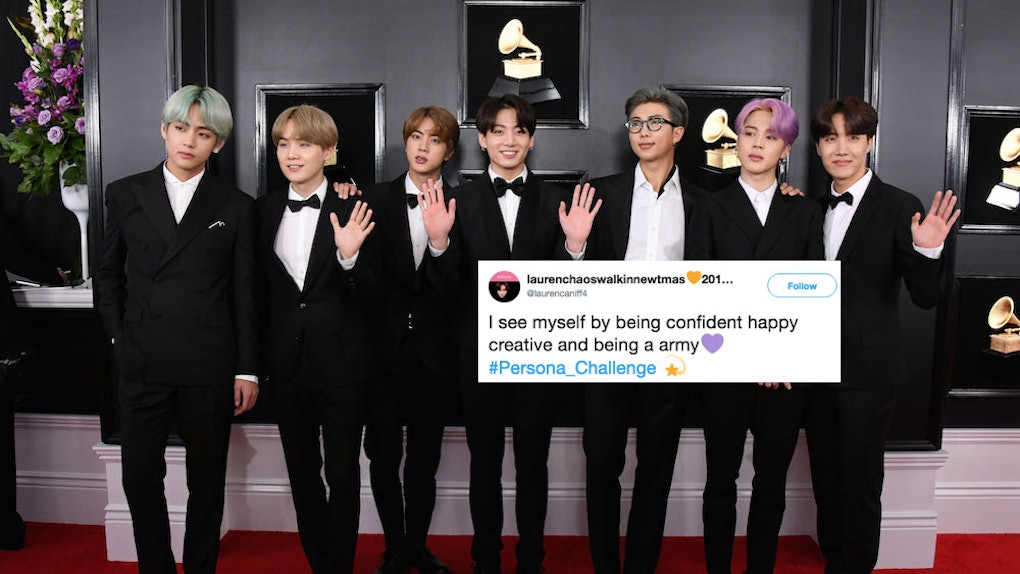 BTS is back. Just kidding, in order for them to be back, they would have had to leave first. And these guys never stop working. Case in point: They're in the final legs of their Love Yourself tour and they're set to kick off their next tour — the Love Yourself: Speak Yourself tour — almost immediately after that's over. Oh, and right after they drop their entirely new album in April. Do they sleep?! The group dropped the teaser trailer for Map Of The Soul: Persona on March 27 that showed RM flexing his rapping skills for three minutes. Now, fans are participating in this new era with their BTS Persona challenge tweets.

Think of the #PersonaChallenge as the 10-year challenge that everyone was doing on Instagram/Twitter a couple of months ago, except with more feeling. ARMYs have been tweeting photos of themselves currently compared to past photos of themselves. The comparisons are made to show how much they've grown through the experiences in their lives, so it's kind of like they're mapping out their soul. Hehehe, get it??

Anyways, some fans are choosing photos from two years ago and comparing them to photos today. Some are choosing photos from the same year BTS got together (2013, aka, the year the fans decided to stan) compared to now. Other peoples' posts go as far back as 2010. There are even some fathers of BTS fans who are tweeting then vs. now photos of them with their daughters.

One thing this challenge has made perfectly clear is how diverse the BTS ARMY is. It's a credit to the group's commitment to their fans worldwide. It also explains why they have been the top social artist on the Billboard Social 50 chart for the last three years in a row. Seriously, they've been in the No. 1 spot for 119 out of the 128 weeks they've been charting.

Circling back to the #PersonaChallenge, fans were inspired to share their stories on Twitter of the hardships that helped them grow thanks to RM's "Persona" lyrics.

In the song, RM raps for a full two minutes before the first chorus starts. Impressive? Yes. Hot? Very.

He's asking a lot of deep questions in the song as well as making big statements about his own struggles with self-love, identity, and authenticity. He raps,

He grapples with his sense of self in this set of lyrics and the added struggle that came with trying to continue to be yourself after you get famous.

I’m still not so sure if I’m a dog or a pig or what else. But then other people come and put the pearl necklace on me. I laugh more than I did before. I dreamt of becoming a superhero. Now it feels like I really became one.

Then here's the catchy as hell chorus that only comes after RM has already done two whole minutes of soul searching.

Here's what the BTS ARMY has to say about where their souls are.

BTS clearly knows how to inspire their fans.

RM's "Persona" trailer isn't necessarily the lead single from Map Of The Soul: Persona coming out on April 12, but it is an indicator for the vibe of the whole album. And by the looks of the ARMY's reaction, the boys' music is clearly going in a good direction.

More like this
These Tweets Comparing Billie Eilish's 'Happier Than Ever' & Ariana Grande's 'Sweetener' Covers Are A Lot
By Sydney N. Sweeney
These Tweets About The Weeknd & Ariana Grande's "Save Your Tears" Remix Are All About Their Fire Vocals
By Sydney N. Sweeney
Britney Spears Fans' Tweets Reclaiming Justin Timberlake's May Meme Offer Alternatives
By Cianna Garrison
Stay up to date