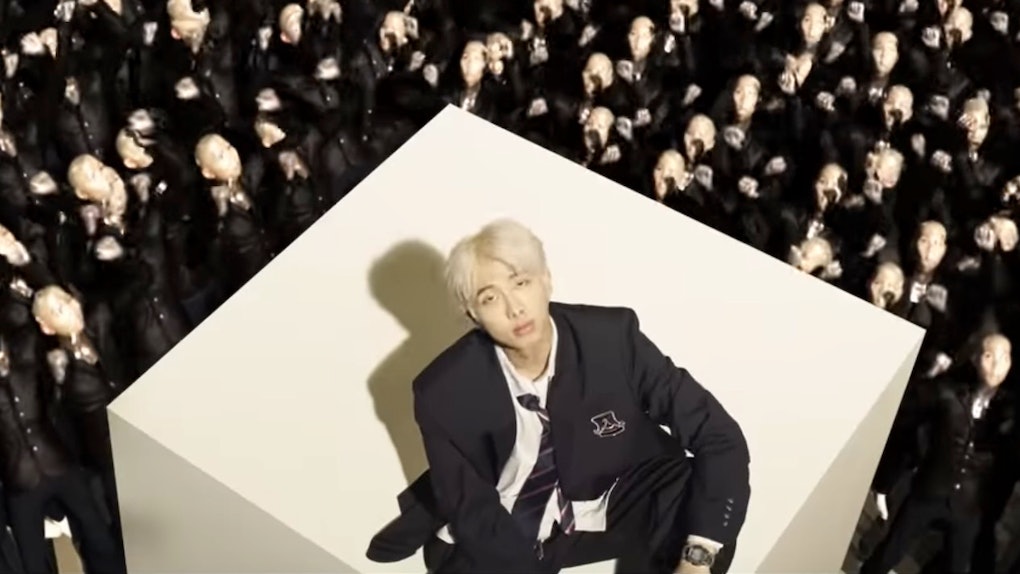 What Do RM's "Persona" Lyrics Mean? BTS' 'Map Of The Soul' Comeback Trailer Is So Deep

It's a moment we've all been waiting for, BTS ARMY! It's RM’s turn to grace us with the comeback trailer for "Map Of The Soul: Persona" and OMG it doesn't disappoint. While — in usual BTS style — the video is totally colorful, full of whimsy, and eclectic visuals, there is so much more happening beneath the surface on an emotional and intellectual level. But what do RM's "Persona" lyrics mean? Well, friends, RM's poetic rhymes grapple with a struggle so many of us face: the search for the true self.

Really, it's all very raw. RM bares himself in "Persona" by questioning who he is and how he can keep track of his identity when he has to keep up, you know, a persona as an ultra-famous musician. He opens the track by asking simply:

RM goes on and sings:

I’m still not so sure if I’m a dog or a pig or what else. But then other people come and put the pearl necklace on me. I laugh more than I did before. I dreamt of becoming a superhero. Now it feels like I really became one.

Clearly, there is some frustration RM is contending with when it comes to feeling powerful and fulfilling his dreams, yet he still can't be certain of who he is or how seriously he should take it all. RM is thinking about the difference between the public RM and the RM he is inside.

Hey, have you already forgotten why you even started this? You were just digging it that someone was listening. Sometimes everything sounds like freakin’ nonsense.

I feel that, RM. I really feel that.

As you may have known, "Map of the Soul: Persona" is actually a reference to a book about Swiss psychiatrist and father of analytical psychology Carl Jung. The book in question, Jung’s Map of the Soul: An Introduction, was written by Dr. Murray Stein, who has already commented on being a fan of the way RM uses Jung's theories to inform his music.

Dr. Stein himself spoke about RM and some of the ideas RM covered in his "Generations Unlimited" speech at the UN on a podcast aptly titled Speaking of Jung.

He talked about how RM seemed very aware of how he needs to keep a "distinction" between the young boy he was growing up in Seoul, Korea, and the famous musician he is now. If he didn't, if he allowed himself to be completely overtaken by fame, that would cause a fractured sense self, or becoming what Stein calls "ungrounded."

If he were to identify with that role totally, he would lose contact with himself, with the boy he was, with the human being that he is.

But if "Persona" is any indication, RM is keeping that distinction at the forefront of his mind, and he is not losing track of his soul at all. Even if life offers him some challenges, moments of darkness, and questioning of his own worthiness.

And, momentary side note here, but can you believe even RM has dark nights of the soul where he is obviously paralyzed with self-doubt? His lyrics continue:

Um, thank you for being so honest is all I have to say, because, same.

He then goes on to tell us that he's not going to be embarrassed, because this is the map of his soul, and he wants to "give us all the shoulders" while we cry, and "give us all the voices" till he dies. Tissues, anyone?

Ultimately, RM tells us that what he's finding out is that whoever he is, he's just going to keep on making art and giving the world his truth, and I don't know about you, but I'm totally psyched about that.

Here are all of RM's "Persona" lyrics in their entirety:

‘Who am I’ the question I had my whole life

If I were answerable with a few mere words

Then God wouldn’t have created all these various beauties

How you feel? How’re you feeling right now?

I laugh more than I did before

I dreamt of becoming a superhero

But as it goes on there’s so much blabbering

One says ‘run’ another says ‘stop’

My shadow, I wrote and called it 'hesitation'

It has never hesitated after becoming that

It keeps appearing under the stage or the light

Keeps glaring at me scorchingly like a heat wave (oh shit)

Hey have you already forgotten why you even started this

You were just digging it that someone was listening

You know what comes out of you when you're drunk.. like immaturity

Someone like me ain't good enough for the truth

Someone like me ain't good enough to be a muse

The flaws of mine that I know

Maybe that's all I've got really

The world is actually not interested in my clumsiness at all

The regrets that I don't even get sick of anymore

I tumble with them every night until I'm disgusted

And twist the irreversible time habitually

There's something that raised me up again every time

So I'm askin' once again yeah

Who the hell am I?

Tell me all your names baby

Do you wanna die?

Oh do you wanna go?

Do you wanna fly?

Do you think you're alive?

My name is R

The 'me' that I remember and people know

The 'me' that I created myself to vent out

Yeah maybe I have been deceiving myself

You must never lose your temperature

Cuz you don't need to be neither warm nor cold

Though I might sometimes be hypocritical or pretend to be evil

This is the barometer of my direction I want to keep

The 'me' that I want myself to be

The 'me' that people want me to be

The 'me' that you love

And the 'me' that I create

The 'me' that's smiling

The me that's sometimes in tears

Vividly breathing each second and every moment even now

Who the hell am I

I just wanna give you all the voices till I die

I just wanna give you all the shoulders when you cry

Who the hell am I

I just wanna give you all the voices till I die

I just wanna give you all the shoulders when you cry

More like this
What New Music Is Dropping In May 2021? BTS, Olivia Rodrigo, & More Will Heat Up The Summer
By Sydney N. Sweeney
These Tweets Comparing Billie Eilish's 'Happier Than Ever' & Ariana Grande's 'Sweetener' Covers Are A Lot
By Sydney N. Sweeney
RM & eAeon's "Don't" Lyrics In English Are An Emotional Rollercoaster Ride
By Michele Mendez
Stay up to date