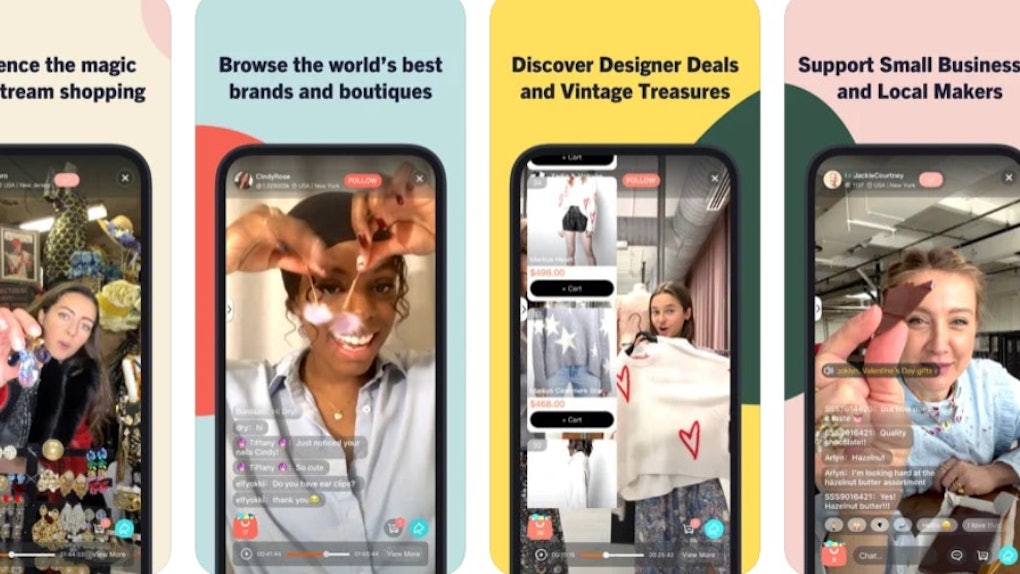 These 5 Women-Created Apps Take Social Media, Shopping, & Beauty To The Next Level

You probably don’t give much thought to the dozens of apps on your phone, but all apps start somewhere, and it's cool to know who actually made them — especially when there are so many women creating some game-changing apps. With new apps released almost daily, it can be hard to keep up. To help you out, we rounded up five recently-released apps created by women, and they're taking social media, shopping, beauty, and more to the next level. To inspire your next downloading spree, take a look at what these innovative apps are all about.

It's always a great time to support women and their businesses. Unfortunately, though, the computer science field still has a long way to go when it comes to representation of women. Beyond the ever-popular Bumble dating app, founded by Whitney Wolfe Herd, you might find yourself hard-pressed to name another app created by a woman. A February 2020 survey from Statista illustrated just how male-dominated the software development field is. Per the results published on Statista by research expert Shanhong Liu in June 2020, 91.5% of the 51,406 developers surveyed online identified as male, while only 8% identified as female. Additionally, data from the National Center for Women and Information Technology (NCWIT) published in April 2020 reported that in 2019, women made up 57% of employed U.S. adults, but only 26% of them held jobs in professional computing occupations.

While, according to the numbers, there are still more men than women in tech development as of March 2021, there are so many apps out there created by women. Unfortunately, they don’t all get their due. You can check out these women-created apps and show your support with a download.

Courtne Smith is the CEO and co-founder of the NewNew app, which launched in September 2020. The NewNew app centers around giving influencers and creators the ability to create community polls. Fans pay for voting power to participate in decisions like what outfit an influencer should wear, giving fans a way to participate in creators’ everyday lives. Once the poll is closed, the creator decides what to do based on feedback in the poll, like fans saying they prefer one outfit as compared to another. Smith tells Elite Daily, “NewNew enables us to do two really neat things: to provide people with joy and entertainment while also enabling others to earn income in an interactive way through a new medium.”

NewNew first got its start in 2018 as Suprize, a prize giveaway app Smith co-founded with Filip Diarra before it evolved into the current app. When it comes to being a woman in tech, Smith pushes back on common refrains about the industry. “Tech gets a bad rap for this, but truth be told, there are many women out there who work in male-dominated industries across different sectors. If you have something great to offer, you deserve a seat at any table.” She adds, “I just see myself as being a person who works their ass off and is relentless about building something that brings real value to people around the world. Being a woman is a bonus.”

The NewNew app is available to download on the App Store.

ShopShops founder Liyia Wu created a unique app that just might change how you shop online. The ShopShops app launched in China in 2016 before making its U.S. debut in November 2020, and it allows you to browse and buy clothing and accessories from more than 750 retail stores around the world, including small businesses and big-name designers. It’s not just regular shopping, though — it’s all done during a livestream. To shop with the app, you can join a livestream at a set time to shop virtually. Plus, the livestream gives you the added benefit to ask questions about any pieces in real-time via the community chat.

Wu tells Elite Daily she sees ShopShops as “a disruptive company.” Wu says, “Most businesses set out to improve a behavior for one set of customers, but ShopShops is solving problems for shoppers, brands, retailers, and influencers all at once,” adding, “but that’s why women are great CEOs: we have stamina.”

Before leaping into the tech world, Wu graduated from Sauder's Business School of the University of British Columbia with degrees in finance and accounting, studied fashion at Parsons School of Design in New York, and she even designed her own fashion line.

ShopShops is available to download in select U.S. cities on the App Store.

Created by astrologer and writer Chani Nicholas and her wife and business partner, Sonya Passi, the CHANI app utilizes astrology for self-discovery and mindfulness. The app includes a detailed birth chart, a meditation library, a journal for self-reflection, and workshops. Some of the content is free to access, but other portions require a paid subscription.

Nicholas tells Elite Daily the most challenging part of creating the app was crafting detailed content. Nicholas says, “100% of horoscopes and birth chart readings in the app were written by me and a team of professional astrologers, and it ended up being more than 500,000 words to write and edit."

Nicholas is combatting tech stereotypes in her own way. She says, “Our company is centered in queer, feminist ideals, and we are intentionally crafting a culture that dismantles the patriarchal systems so many workplaces are modeled around.” Nicholas adds that the app also donates 5% of its profits to Black, Latinx, Indigenous, Queer, and Trans survivors of gender violence through FreeFrom.org. “We’re not trying to fit the mold of a tech company; we are a company committed to healing and wellness,” she says.

In addition to launching the CHANI app in December 2020, Nicholas released an astrology book, You Were Born for This: Astrology for Radical Self-Acceptance, in 2020, was featured in Netflix's Star Power, and has served as a counseling astrologer for over 20 years.

The CHANI app is available on the App Store.

The Marigold: Self Confidence app launched in August 2019, and it offers over 350 guided audio sessions from expert coaches covering topics such as personal growth, relationships, and career. Designed to be accessible for people on the go, each session is only five to 10 minutes long — and there are new ones added regularly.

Founders Sarah Stefanski and Jennifer Greenberg created Marigold after realizing many women in their lives needed a way to harness their self-confidence. After meeting in the TV industry in New York City in 2012, the pair quickly became friends, and they created the Marigold app in 2018. Stefanski told Westchester Magazine in November 2020, “We felt like there was a need for something that was accessible to all women, to help them build confidence in different areas of their lives.” Greenberg added, “We just want to empower women and help them feel good about themselves.”

You can try Marigold free for seven days, but after the trial, it costs $7.99 per month or a flat fee of $39.99 per year. You can download Marigold on the App Store.

Aurelia Edwards, co-founder and CEO of the Nailstry app, took her love of nail art and turned it into an app designed to help people find their best press-on nails. The app, which was founded in September 2018 and launched in March 2020, creates an easy way to shop for press-on nails. It utilizes a virtual measurement tool to find your fit and a global network of nail designers you can shop nail sets from. Users can also chat directly with a nail designer to create a custom set.

Edwards tells Elite Daily, "My favorite part of creating the Nailstry app was being able to immerse myself in nail art. I have always been a lover of nail art, and being able to create a tool that makes finding cool designs fun and simple has been really enjoyable."

Edwards is hopeful about seeing more diversity in the tech world. "As a result of the current cultural shifts towards inclusion and elevation of female and minority representation, the tech industry is becoming more aware of its responsibility to be inclusive," she says. "My experience as a Black female tech founder so far has been positive ... I believe this is a pivotal time for female and minority founders entering the tech space, and I look forward to seeing the impact that we will have on the future of innovation."

The Nailstry app is available to download on the App Store.