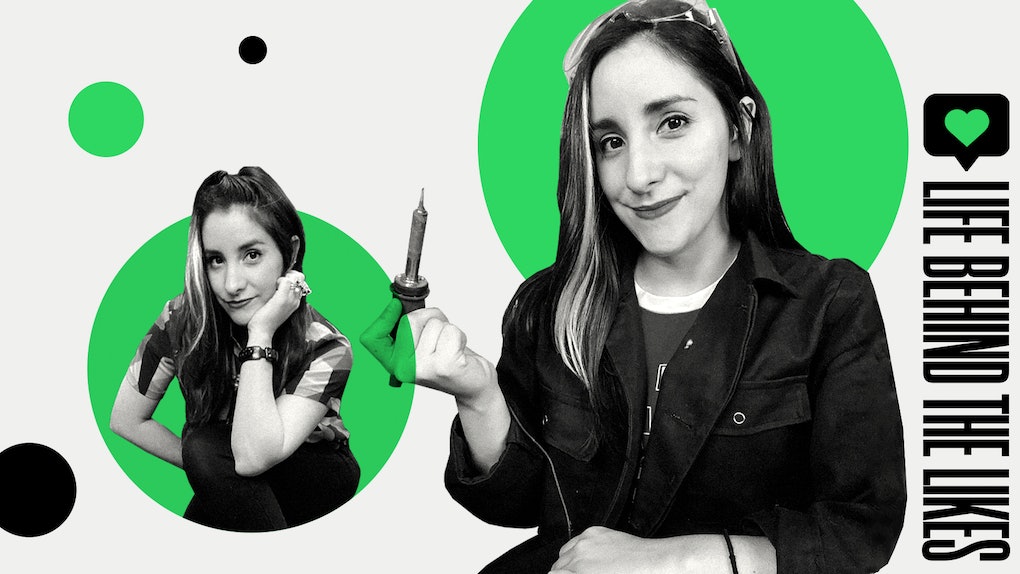 As a “self-proclaimed Imagineer," YouTuber Estefannie’s channel looks a lot different than the makeup and food tutorials you might see on your feed. In place of face contouring videos and baking hacks, the Estefannie Explains It All YouTube channel is filled with step-by-step tutorials for how to create projects with computer programming, like an automated French press or a real-life Daft Punk Helmet. By breaking down the basics of computer science and programming — and making it entertaining AF — Estefannie is bringing the world of Science, Technology, Engineering, and Mathematics (STEM) to her viewers in a super accessible way.

She first came up with the idea for her YouTube channel while preparing for a software engineering job interview in 2016. During her prep, Estefannie wasn’t really in the mood to study algorithms and coding, and she thought back to the times she had mastered certain subjects. “I knew that if I could explain it to someone else, that meant I knew it,” she says. At that time, Estefannie was just beginning to create computer science tutorials, and she decided to forgo the interview to go full-steam ahead with YouTube. “I wanted to pursue a content creation path for my career rather than continuing on as a software engineer for a large corporation,” she explains. (It would be three more years before Estefannie could fully quit her day job as a software engineer.)

Estefannie, who lives in Houston, Texas, used to dream of becoming a Disney Imagineer, which is someone who builds the rides, robotics, and animatronics at Disney theme parks, but as she kept creating inventions on her YouTube channel, she created her own dream job. “I’m already doing it,” she shares. “I don’t think I need [the Imagineering job] anymore” — hence her self-appointed title as a “self-proclaimed Imagineer.”

In addition to furthering her own skills, Estefanni wants her YouTube channel to help others struggling with programming. "I [found] there were a lot of people who wanted to [study] programming and software engineering but couldn't go to college for whatever reason," she says. "So it was another way to share what I learned in school [with] other people."

I like to show how I build inventions — and my mistakes while building.

Estefannie’s first real experience with STEM was when she moved to Texas from Mexico to attend University of Houston. She quickly discovered a talent for math and even helped found the Computer Science Girls organization at the school in August 2013. Estefannie graduated in 2014 with a bachelor’s degree in computer science and minor in mathematics, but getting through the rigorous course load was no easy feat. During her time at University of Houston, she turned to YouTube to help her more fully understand the coursework, but there weren't many in-depth computer science tutorials. "The [computer science videos] that I found were very superficial in the sense that they tell you the theory, but never applied it with code," Estefannie explains. She aims to fill this gap with her detailed videos on YouTube. "When I started doing my tutorials, I made sure I did all of it: Explain how it works and then also show code on how to implement it,” she says.

Don’t let the subject matter fool you: Estefannie’s videos are also filled with plenty of humor and entertainment that’ll make even the most math-averse individuals want to get in on the fun. From little moments like correcting herself with a caption that reads "*fangirling" as she says "girlfanning" in a December 2020 robot tutorial, to creating an entire theme song and ‘80s-themed commercial for said robot, Estefannie’s relatability sucks viewers in and makes them believe they can create projects, too. “I like to show how I build inventions — and my mistakes while building,” she says. “[The hope is] to inspire people of all ages to also make things with electronics and programming and not be discouraged when they make a mistake.”

[My followers] tell me they really like the way I explain things because I try to make it as simple as possible.

Estefannie shares her tutorials through written, step-by-step instructions — just like a recipe for cooking — on the Estefannie Explains It All blog. She hopes the recipe-like format for building projects will “make electronics and programming as mainstream as baking.” Her YouTube viewers can also access all of her code to more easily recreate her inventions.

The YouTube channel got its first big boost from Estefannie’s 2016 video on how to make a smart gingerbread house. While donning a “Chillin’ with my snowmies” sweater (because computer science is fun, people!), she equipped a decorated gingerbread house with a solar panel and electronics in order to turn on the Christmas lights, open the front door, and more — all controlled from her iPad. The tutorial was later profiled in a February 2018 blog on the Raspberry Pi website, which is an electronics company that sells low-cost mini computers people can use to learn programming. Estefannie credits the feature to not only bringing more traffic to her YouTube channel in 2018, but also giving her a boost of personal motivation. "[YouTube] was still my hobby [at the time]," she says. "It gave me the encouragement I needed to keep posting online."

As of publication on March 10, the Estefannie Explains It All YouTube channel and her Instagram account @estefanniegg have a combined 137,000 followers. One of her most recently popular videos is a tutorial of a 3D printed Daft Punk Helmet, which has had plenty of views since Daft Punk announced they broke up in February 2021. Another fan-favorite is her series of videos on how to make Instagram filters, in which she shares step-by-step tutorials for how people without any programming experience can use Facebook’s Spark AR Studio to create effects. "[My followers] tell me they really like the way I explain things because I try to make it as simple as possible," she says.

I want to give back and have people be able to make the projects I make, and not be stopped by money.

Estefannie was able to quit her full-time job as software engineering lead in March 2019, and she now focuses on content creation as her main source of income. She does everything herself from start to finish, including building the projects, video editing, and posting on social media. Estefannie usually works on several different robotics projects at a time, with each project taking around four to six weeks for both building and video editing. (She’s currently working on a smart litter box for her cats and a guacamole machine.) If she's just sharing a tutorial without having to build a project, however, it could take as little as a week and a half to complete a video.

To stay engaged with her followers, she films weekly, hour-long live streams on Instagram, and she hosts interviews with other creators. Estefannie also gives back to her followers with giveaways of mini computers and microcontrollers that she receives from brands. "I remember when I was a student, I couldn't afford anything and I didn't [even] have a computer to study computer science," Estefannie says. "I want to give back and have people be able to make the projects I make, and not be stopped by money."

One of Estefannie's favorite parts of content creation has been partnering with other companies and creators. She's worked with major brands like Samsung on an Instagram campaign to explain how 5G works, and she even gets to visit the offices of computer companies to try out new products. Estefannie hopes to work with more creators in the future and to partner up with another engineer for her channel so she can build inventions faster.

I had to learn to become super patient with myself … just be patient about it and keep trying.

As a woman in STEM, though, Estefannie has faced her share of challenges. “It’s hard,’” she says. Looking back on her time as a software engineer lead, she describes how she felt like she was constantly defending her work. She also had to make sure to blend in physically by not wearing makeup or any clothing that could be thought of as revealing.

On her YouTube channel, Estefannie does anything but blend in. She credits her computer science and programming journey to her own perseverance, and advises others not to give up. "There were several times that I thought I wanted to quit," Estefannie says. "I had to learn to become super patient with myself … just be patient about it and keep trying."

In Elite Daily's Life Behind the Likes series, we talk to the people you know on the internet to find out who's really behind the screens. Read more here.