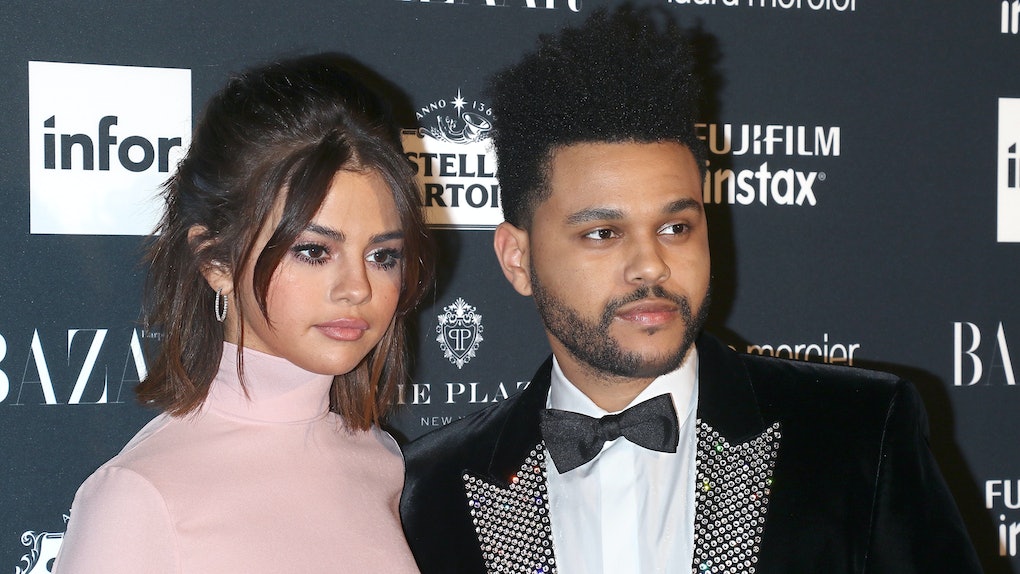 New music from The Weeknd is on its way, and Selenators might want to take a close listen to this one. The track hasn't officially dropped yet, but, the title says it all. According to ASCAP, where he registered the track, The Weeknd's new song title name-drops Selena. Yes, you heard that right, Selena, as in his ex-girlfriend's name. And while the title doesn't mention a last name, it's hard not to suspect there's something left unsaid between these exes... at least for The Weeknd.

The Weeknd recently registered a track called "Like Selena" in the ASCAP repertory, and while it's not yet confirmed the song is about that Selena, Gomez is the only Selena he's ever dated. The pair started dating in January 2017, and split 10 months later, reportedly due to their intense travel schedules.

I know, you're probably waiting on the edge of your seat to hear the track now, and I don't blame you. I'm right there with you. So, you'll be happy to know it seems like the track could come sooner than later. If you take a look at The Weeknd's Instagram, all the signs point to new music coming soon.

For starters, on Nov. 25, the singer deleted all of his Instagram posts and replaced them with one promoting new music. Classic. Now, his singular cryptic photo has a very telling caption. "The fall starts tomorrow night," he wrote below a blurry black and white photo, hinting new music will drop on Nov. 26.

Then, he shared the same photo to his IG stories writing: "tomorrow night we start again." Clearly, The Weeknd has something big in the works.

At this time, there's no telling if the highly-teased track will indeed be "Like Selena," but I'll be watching Spotify like a hawk, y'all.

Why now to release a track about Gomez? Perhaps, The Weeknd was inspired by Gomez's own vulnerability and transparency in he recent track, "Lose You To Love Me." The song is believed to be about her ex, Justin Bieber. Apparently, fall 2019 is the time for reflection y'all.

Of course, Gomez isn't the only famous Selena to ever exist. If, by some weird twist of fate, the song isn't about Gomez and is about Selena Quintanilla-Pérez— the late, great, Texan Tejano queen — I won't even be the least bit salty.