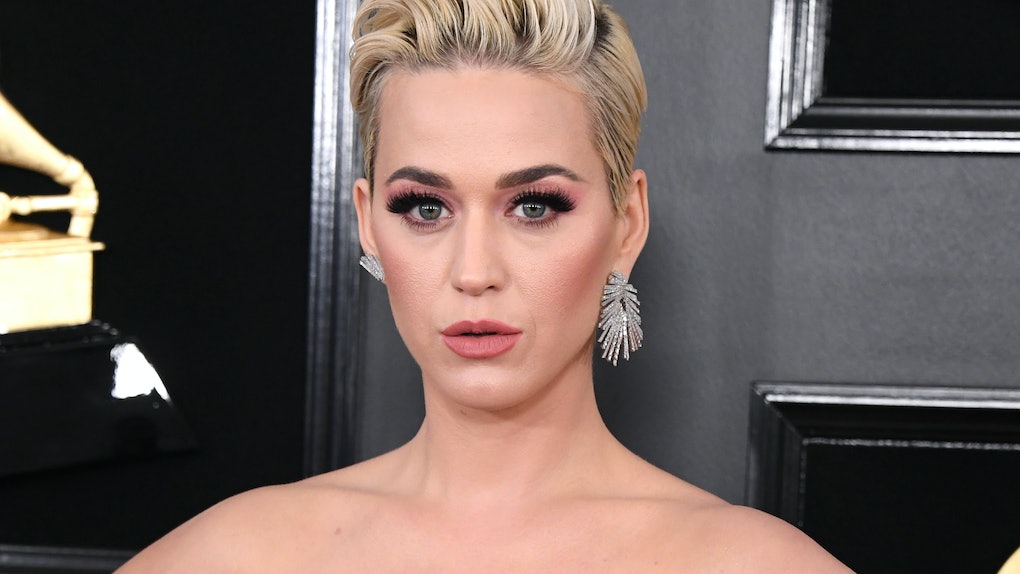 Katy Perry has never been one to keep a lid on her emotions, but can you blame her? She's got a lot she needs to express, and the world is an emotional rollercoaster of a place. But Katy Perry crying over a contestant's engagement on 'American Idol', is a particularly relatable all-the-feels moment, because live engagements in front of massive crowds are never going to get old. Love is exciting, people, let's just accept that!

So, here's the deal. On Monday night's episode of American Idol, contestant Joanna Jones got a surprise engagement from her dearly beloved, Matt, and while it happened, Katy Perry could not — I repeat, could not — keep it together. When witnessing the proposal, the rainbow suit-clad singer literally dropped to the ground. The love was too much. It was simply too much.

But Perry had every reason to be overcome with sobs of joy. I meant the whole thing was actually a double-whammy surprise for Joanna Jones, as she didn't even think her darling boyfriend Matt was even going to make it to the show. The man had final exams!

"I wish my boyfriend Matt could be here," Jones said during an interview on the show. "He's the most supportive, loving, awesome guy I've ever met."

Jones added that she didn't want "to get ahead" of herself but she was sure he was The One, and she would be totally psyched to spend her life with him. "We don't need to tell him that quite yet," Jones laughed.

Oh, Joanna, aren't you in for a surprise!

But again, Jones thought that Matt had good reason for not coming to the show. Joanna said he was in his last semester of school and finishing up all his finals, so he just couldn't make it. A likely story, Matt. Apparently, he even shed some tears when he told her he would be missing her big night on Idol. A night she called "the most important performance of my life."

Jones killed it hard and impressed the judges with an admittedly flawless rendition of Chris Isaak's "Wicked Game." Perry was instantly moved by the performance and couldn't take her eyes off Joanna the whole time she sang, in fact. It really laid the groundwork for the proposal to come.

Upon singing her last note, Matt shot out of the wings, introducing himself to the crowd and explaining that while he couldn't be there all week (because of finals) he couldn't wait another day to profess his forever love. This is when Perry went down hard and, without missing a beat, started to sob like a newborn and fan herself. One of the other judges even called out, "Katy's gone!"

Thank the heavens that Joanna said an enthusiastic and very emotional yes. A moment KP actually missed because she was sobbing so hard behind the judge's table.

But she got it together, and with co-judges Lionel Richie and Luke Bryan to give the couple a hug, still looking pretty shell-shocked if we're honest. Someone luckily gave her a tissue, and she announced that she needed the makeup team ASAP. Nothing's wrong with a few tear tracks, girl. It shows you're human!

Guess it's pretty lucky that she and Orlando Bloom have decided to tie the knot not too long after this, especially since she yelled out "Why won't somebody love me like that?" at the end of the clip. Could she have put the pressure on bae after witnessing this beautiful night?

More like this
Are Olivia Lux & Utica Dating After 'Drag Race'? Olivia Gave An Update
By Dylan Kickham
Clare Crawley Clapped Back At A Troll Who Said Dale Moss Should Dump Her
By Candice Jalili
20 Celebrity Couples Who Were Born The Same Year As Each Other
By Corinne Sullivan
Stay up to date