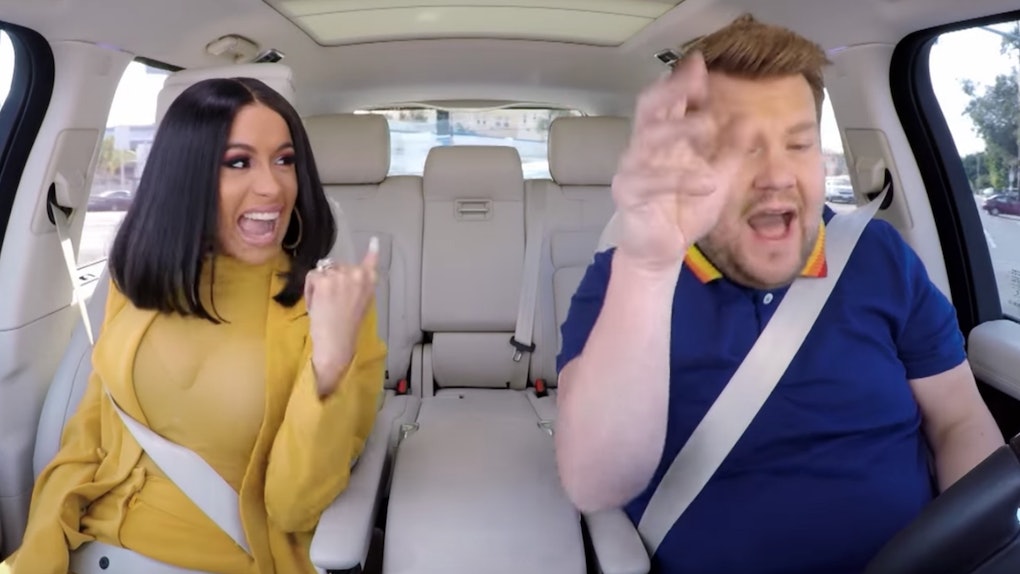 I feel like it's a universally held opinion that Cardi B is one of the funniest celebrities out there, right? Cool. Glad we're on the same page. So it was only a matter of time before James Corden got her in a Carpool Karaoke segment. And oh boy, the video of Cardi B on Carpool Karaoke does not disappoint.

If you follow Cardi on Instagram, you might have noticed that homegirl owns a sh*t ton of cars (she literally has five, as she maps out in the video). The funniest thing about that, though, is that she doesn't even have a driver's license! And it's not like she used to have one and it expired, or she used to have one and drove herself around before she got famous. Nope, Cardi B doesn't know how to drive. She has five cars and precisely ZERO driving ability, so naturally, Corden tried to teach her how to drive in the segment.

"Here's my biggest question, you can't drive," Corden said, "so what's the point of having the cars?"

"To take pictures with it," Cardi said.

LOL. SAME. I too have so much money that I bought five cars I can't use, so I can totally relate... NOT! Oh, Cardi.

Corden, laughing, suggested she could just take pictures with the cars in the showroom, and Cardi responded, "Nah, that's being an imposter, yurrrr. Do you know how many things now that I can rap about now that I own these cars?"

And then, James Corden tried to teach Cardi B how to drive... and it did not go well.

They sauntered over to a parking lot that was set up with a bunch of traffic cones and flags Cardi was meant to drive around, but life doesn't always go according to plan.

This one right here, officer!!

I'd like to take a moment to zoom in on Corden's face here.

That's the face of a man who is seriously fearing for his life.

Cardi ultimately, mercifully, decides it's probably better if she lets other people do the driving.

After that, they went to a nursing home to perform for an older demographic, and the crowd actually loved it! They all danced around with Cardi and Corden, and one man even asked if she was single.

She's rocking her gargantuan diamond ring from Offset in "Carpool Karaoke," however, so this looks like it was filmed while they were still together, but, y'know, things change.

Of course, we all well know by now that Cardi B and Offset have broken up, and Offset has been causing all kinds of drama trying to get her back.

Luckily, Offset wasn't a topic of conversation in this segment of "Carpool Karaoke." But they did drive by a park where a bunch of middle schoolers got excited to see her and Cardi, in her Cardi way, told them to stay in school, listen to their moms, and buy her new single. Oh, Cardi. I love you.