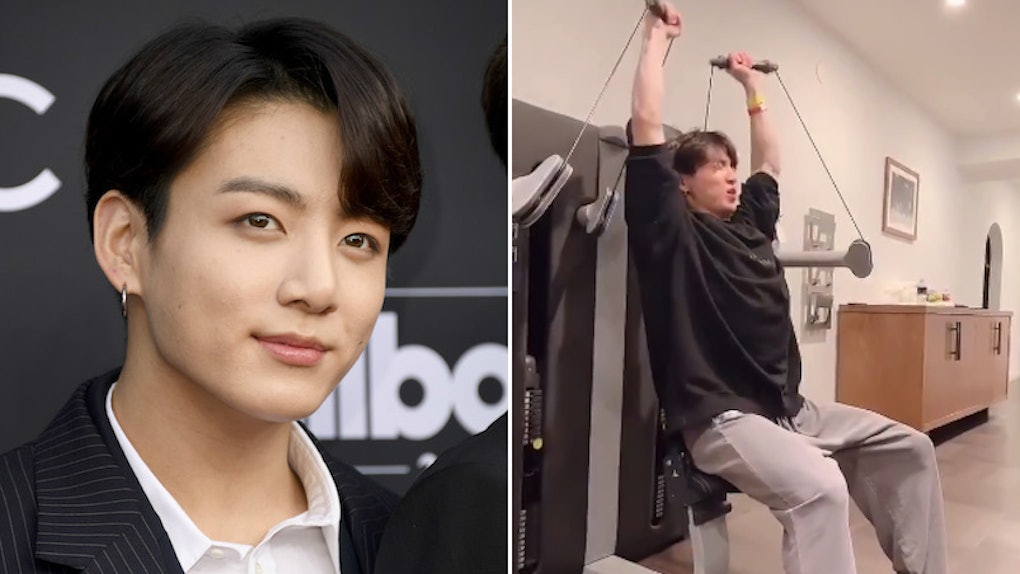 Uh oh. Are all you ARMYs out there sitting down? There's a video of BTS' Jungkook working out at the gym, which might explain why fans have noticed an uptick in the idol's muscly look these days. Somehow, in between touring, all of BTS' award show appearances, the recording studio, and looking for time to eat and sleep, the beloved BTS member has found time to pump iron, too. Sure, he isn't the first celebrity to hit the gym with enthusiasm, but ARMYs don't care about other celebrities. This is BTS we're talking about here. Their fans are next level.

The video popped up on social media on the morning of May 7. In it, Jungkook is sitting down at an arm machine with his trainer. It's hard to tell how much weight he's lifting in the video but, based on his grunts, I assume it's a lot. The video runs about 30 seconds long, and two-thirds of the way in you can tell Jungkook is really straining to give it his all. Fun fact: He has apparently been given the nickname "Muscle Pig" which is a compliment, y'all.

I don't make the rules. I just follow them.

That's it. That's the whole thing. But, fans are living for it.

People are full-on freaking out looking at their beloved Jungkook break a sweat. More specifically, ARMYs can't stop talking about his arms. Fans can't help but notice Jungkook seems to be growing suspiciously stronger in his upper body and they simply must share their opinions about it on Twitter.

Check out the thirst:

This post came prior to the video, but the sentiment still stands:

Not long before Jungkook posted his arm exercises, he also shared a little boxing session with his fans. It's hard to believe he's fitting in workouts in between the sheer cardiovascular triumph that is a BTS concert. But, I guess that's why he's a famous K-pop idol and I'm not. (Yeah... I'm sure that's the only reason.)

The boxing video was posted on April 22, and by the time this second workout video came along, it had gained over 1.65 million likes and nearly 700 thousand comments.

That's a hell of a lot of people cheering you on, Jungkook.

One reason people might be so hyped to see their main boy hitting the gym so hard is that Jungkook suffered a minor injury while BTS was touring in England late last year. He actually had to sit down during the European leg of their concerts (*gasp!*), which brought him to tears at their London concert, like, a few times. The emotional moment is caught in the Love Yourself: Europe concert DVD trailer. At the time, Big Hit Entertainment released a statement explaining, "The opinion of the medical team is that while the injury is not serious, performing choreography may do further damage to the injured area."

Fortunately, ARMYs know (and can see!) he's all healed up and back in the game in a big way.

More power to you Jungkook. Go get 'em.

More like this
These Tweets Comparing SuperM's "We Do" To BTS' "Dynamite" Video Are So Split
By Michele Mendez
Why Did Addison Rae Deactivate Her Twitter? Fans Think This Is The Reason
By Brandy Robidoux
Britney Spears' Instagram Message To Fans "Concerned With Her Life" Is So Positive
By Brandy Robidoux
Stay up to date