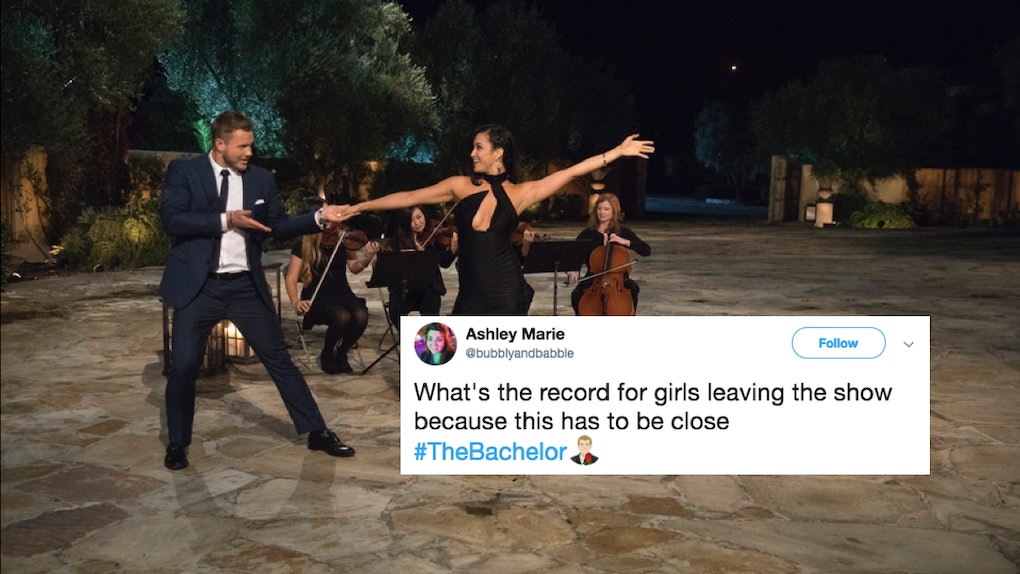 I'm gonna just come out and say it: I have no idea what TF is going on on this season of The Bachelor. From the constant drama over people crying and bullying each other to the drama over one-on-one dates to Colton's definition of "opening up" seemingly being sharing a singular factoid about yourself that isn't your favorite color, my head is spinning. The only thing I know for sure about this season, though, is the fact that these tweets about girls leaving The Bachelor voluntarily this season are on point.

Look, I get it. Not everyone can be compatible with the same person, and the competitive environment The Bachelor thrives in isn't for everyone (even if you sign up for it). But I mean, come on. If you've been watching this season, you can't deny that it feels like more women than usual have either already left or are thinking of leaving on their own. We saw the first of this trend with contestant Elyse, who left on her own during Week 5, despite having a one-on-one date with Colton earlier in the season. Apparently, she didn't feel comfortable with the prospect of a proposal after having to share her time with Colton with so many other women. I mean, that's the name of the game, but, like, valid.

Then, during Week 6, Sydney left on her own accord after having some pretty freaking tense conversations with Colton. (No, really, you could cut the tension with a knife.) She cited her reasons for leaving as feeling like Colton wasn't opening up as fast with her as he was with other people, so she didn't really see their relationship progressing any further. Again, valid, but damn. These ladies are dropping like flies!

I promise you, this trend is not lost on the loyal group that is Bachelor Twitter. Literally everyone is wondering why TF women who signed up to try to make it all the way to the end of this road are dipping before the finish line:

I know, I know. Two girls leaving on their own may not seem like a pattern or that dramatic. But if you've read the spoilers for this season, you'll know that the pattern doesn't stop here. And even then, you know there's something up when the women who signed up for a reality love competition no longer feel the need to see it through. Perhaps they wanted to take their fate into their own hands (more power to you, ladies!) or perhaps they weren't happy with the way the cookie was crumbling (again, more power to you, ladies!). Regardless, so many women dipping out early doesn't bode well for the public perception of how Colton's season is turning out. Though, I assume it does make the rose ceremony eliminations a little less stressful?

Well, we'll have to wait and see if the rest of the cast decides to up and leave Colton in the dust during the middle of the night. Just kidding. But stay tuned to ABC on Monday nights to see who comes out on top of this dwindling list of contestants.

More like this
What Would An LGBTQ+ 'Bachelor' Season Look Like?
By Abby Monteil
Matt James' Quote About His 'Bachelor' Fantasy Suite Dates Is Revealing
By Corinne Sullivan
Bekah Martinez's Explanation For Being Reported Missing In 2018 Is Wild
By Rachel Varina
Stay up to date