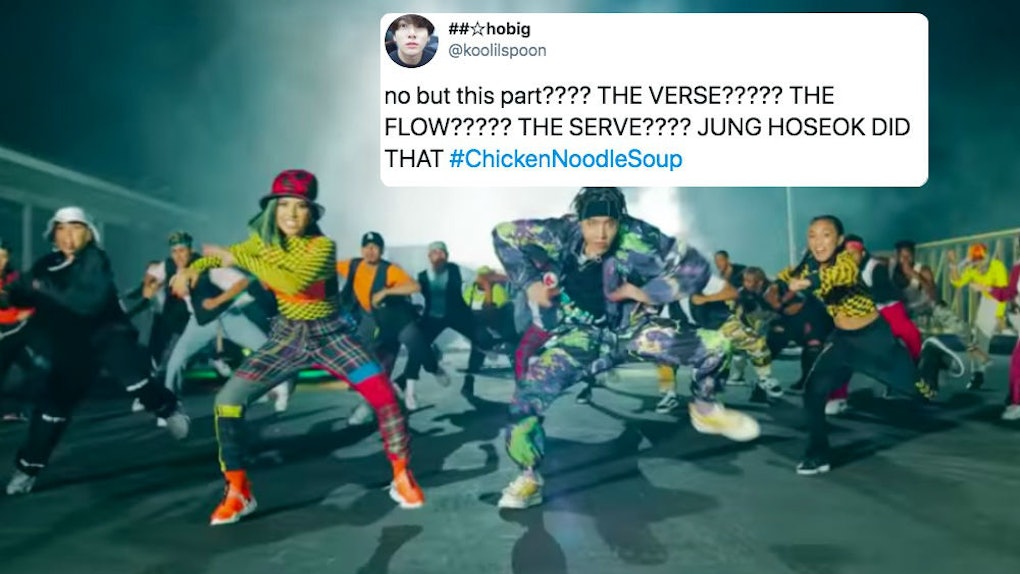 The BTS ARMY is at it again. They've taken over Twitter because they just can't help but express their enthusiasm over a surprise BTS collaboration. Honestly, who could blame them? Surprise collaborations are the best. In July, RM and Lil Nas X teamed up for a remix of "Old Town Road" called "Seoul Town Road," and now two months later, J-Hope has collaborated with Becky G for "Chicken Noodle Soup." The song is pretty epic and these tweets about J-Hope and Becky G's "Chicken Noodle Soup" show the BTS ARMY won't stop talking about it anytime soon.

Ever since Becky G and J-Hope met at the 2019 Billboard Music Awards on May 1, they haven't been able to hide their admiration for each other's music. They've given each other shoutouts in interviews and livestreams, and because of this, fans have been keeping an eye on both BTS' and Becky G's social media pages for any hints the two could really be collaborating.

On Aug. 20, Becky G sent the BTS ARMY into a frenzy when she shared that she was on the set of a music video and had Korean snacks on set. Fans thought Becky G was hinting she and J-Hope were actually working together on a song and music video.

Then, on Wednesday, Sept. 25, Becky G and J-Hope revealed that they were both hiding a secret. Obviously, fans thought this meant Becky G and J-Hope were announcing their collaboration. Fans didn't know anything about the song, except it had something to do with "CNS."

It turns out the secret was their song and accompanying music video for their twist on "Chicken Noodle Soup." Although fans already guessed the team up was coming, they still weren't prepared for this twist on a classic dance-floor fave at all.

The song takes the chorus from DJ Webstar and Young B's classic track and adds some 2019 flare because J-Hope and Becky G tell their own stories of striving for success in Korean and Spanish. The classic 2006 track is both J-Hope and Becky G's favorite song from childhood, so it made sense that they would turn to the tune to meld together their respective cultures will their love for classic hip hop!

HERE'S HOW FANS REACTED TO J-HOPE AND BECKY G'S "CNS":

Even BTS got in on the hype train! Jimin took to Twitter to exclaim how cool J-Hope was to the world.

That was my reaction, too!

Guys, I am so happy this collab actually happened I could cry. I hope J-Hope and Becky G get a chance to perform it live one day because that would be epic! The Masked Singer's been hyping the collab on Twitter, so I definitely think they should jump on the "Chicken Noodle Soup" train, stat!

Check out the music video below and prepare to start Chicken Noodle Soup-ing all day!