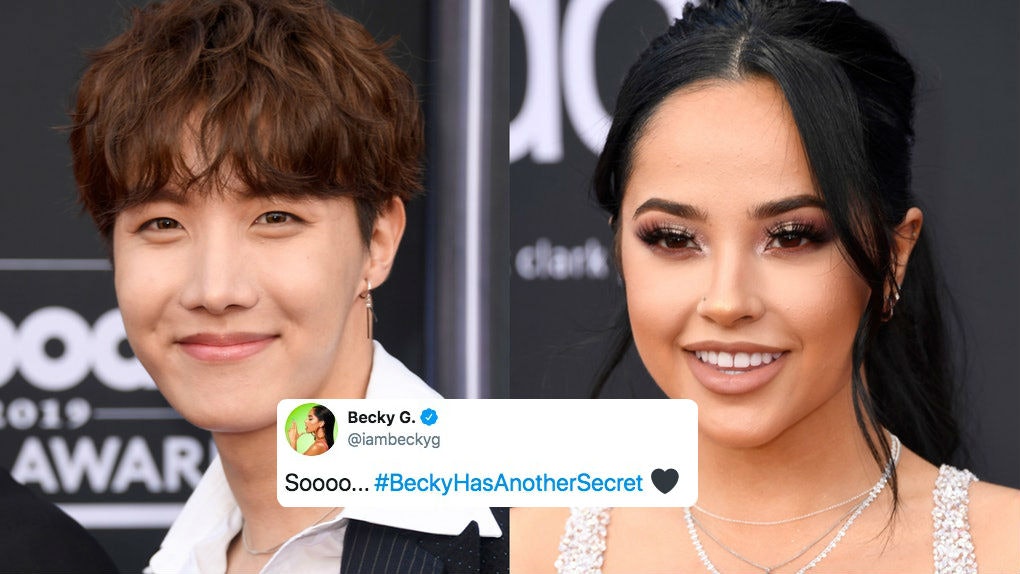 It's time to get hype, y'all! Because it looks like a collab between Becky G and BTS may actually be happening. Like, for real for reals. The seven-member band and the singer exchanged a bunch of obscure-but-not-really tweets on Sept. 25, and ARMY is so, so shook. Like, thank you for giving us all a lil mystery to dive into while we struggle to make it through the rest of the workweek. BTS and Becky G's cryptic Twitter interaction just totally made my day. If you haven't seen it yet, sit back and lemme get you up to speed.

OK, so rumors of a collab between the "Boy With Luv" sensations and the "Singing In The Shower" crooner first started circulating back in June after Becky G hinted at a collab with BTS during an interview with iHeartRadio’s 103.5 KTU.

What happened was this: Hosts Lula and Lala asked Becky G what it was like when BTS requested to meet her at the Billboard Music Awards in May, and in her answer, she pretty much copped to an upcoming partnership happening some time down the road.

"I don't really want to say too much, or anything," she began. "We might have a little something-something. We definitely connected. Obviously, when I got invited to their dressing room downstairs at the Billboards... I was freaking out. I was, like, is this really happening?"

"Now, in music, we're in such a special moment," Becky G continued. "There's no such thing as boxes, there's no such thing as walls. We're just collaborating. All different types of genres. We’re just mixing it up. [BTS] is obviously very successful themselves. They work their butts off. So, hopefully when things line up timing-wise we will make this happen."

I mean, it sure sounded like a collab was in the works, y'know?

Fast forward two months to August, when J-Hope traveled to Los Angeles for some type of "important business." Whether or not that business was an appearance on The Masked Singer as some ARMYs have been theorizing is still TBD. But the very next day, Becky G posted a clip of Korean snacks on Twitter, and ARMY was convinced this meant the two had met up to work on some type of secret collaboration.

Let's not forget when BTS gifted Halsey with Korean snacks back in 2017.

You know how that story ended. (*cough* "Boy With Luv *cough*)

Anyhoo, a whole month then went by after J-Hope's mysterious trip to L.A., and none of the collaboration speculation was ever confirmed. But on Sept. 25, one Miss Becky G hit up Twitter to tell the world she had a secret:

A few minutes later, BTS’s Twitter account shared a reply that read: "Hey @iambeckyg, I have a secret, tooo #CNS."

Then Becky G retweeted BTS' tweet, and tacked on a whole bunch of secret emojis:

What does it all mean, ARMY? Is the Becky G/BTS collab a go? Is the entire group involved or just J-Hope? Will one or both of the pop sensations appear on The Masked Singer? I have so many questions, my head is legit spinning.

The recent Twitter interaction between BTS and Becky G seems to confirm they have something in the works. Guess we'll just have to wait and see exactly what that something-something is.

More like this
Which Album Will Taylor Swift Re-Release Next? Her Hints Have Fans Shaking
By Brandy Robidoux
Kim Kardashian & Nicola Coughlan's 'Bridgerton' Twitter Convo Is Peak Fangirl
By Dylan Kickham
Why Did Addison Rae Deactivate Her Twitter? Fans Think This Is The Reason
By Brandy Robidoux
Stay up to date