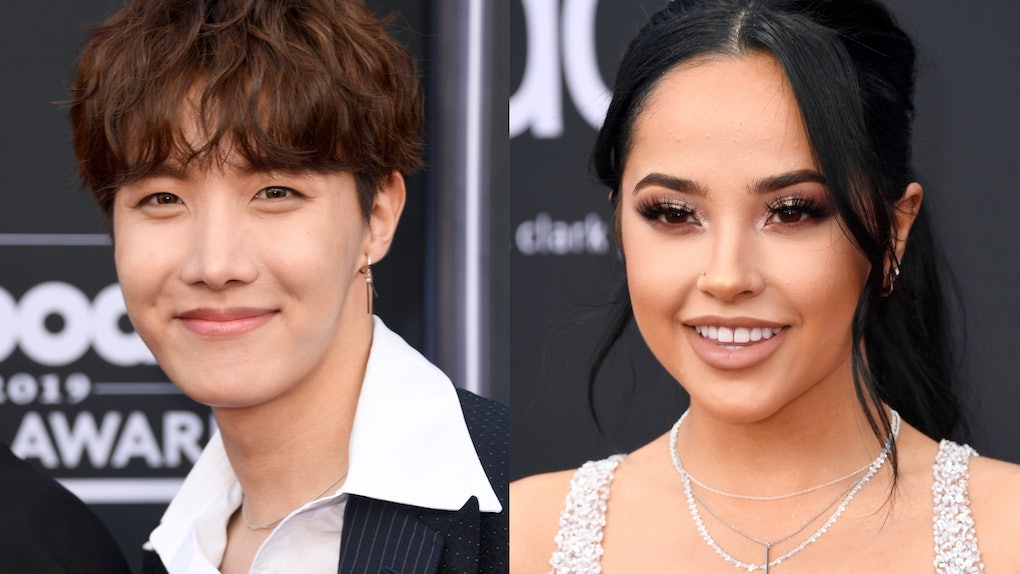 Is BTS' J-Hope Collaborating With Becky G? This Fan Theory Is Actually So Convincing

BTS began their vacation shortly after their Lotte Duty Free Family Concert on Aug. 11 and since then, RM, Jin, Suga, J-Hope, Jimin, V, and Jungkook have been enjoying their time off. Along the way, BTS has been giving fans snippets of what their lives have been like away from the spotlight. Jimin went to an Alec Benjamin concert in Korea, Suga reunited with his dog Holly, and RM's been "Namjooning," according to his latest Weverse update (based on his Twitter posts, I think that means he's been busy visiting museums and riding his bike). As for J-Hope, well, he hopped on a plane to LAX with a dream and a cardigan — scratch that — bucket hat. Fans think the reason why J-Hope traveled all the way to LA from Korea is that he could be collaborating with Becky G. So, is BTS' J-Hope collaborating with Becky G? Fans have a strong feeling he is!

OK, so why would fans believe J-Hope and Becky G could be collaborating? Well, first off, the two stars met the night of the 2019 Billboard Music Awards on May 1. BTS wrote on Twitter, "We met @torikelly @iambeckyg @ciara."

Becky G said BTS personally invited her to come and hang out with them in their dressing room, which means they must be a fan of her music. She said, "Almost wanted to cry when Sherin told me @bts_bighit wanted me to come down to their dressing room to hang out.... like what is life. THEY’RE SO NICE."

Since then, both J-Hope and Becky G have been giving each other shoutouts in interviews. In an interview with 103.5 KTU, Becky G talked about meeting BTS at the BBMAs and even hinted that the two could be working together on new music in the future. She said, "We might have a little something something. We definitely connected."

Don't believe me? Watch for yourself below. (She says it around the 4:40 mark.)

Meanwhile, when asked about who he would love to collaborate with, J-Hope said "Becky G." (You'll hear him say it around the 10:06 mark in the video below.)

He also said it again during a livestream on VLive.

That brings us to the present. Like I said, J-Hope's currently in LA and fans have no idea why. One fan on Weverse asked him, "Hobiiii I know it's a secret, but what are you doing in America???" J-Hope responded with, "Sorry important businessu...." Of course, that could mean anything, since J-Hope's used that line when buying ice cream during an episode of BTS' vacation series Bon Voyage, but since he never makes a trip to America alone, fans are really suspicious.

They thought J-Hope could be visiting the U.S. due to a collaboration. One possibility was Khalid, since BTS pretty much confirmed they would be collaborating with him, but as soon as that rumor started, Khalid quickly (and hilariously) shut it down.

That leaves us with Becky G. As you heard for yourself, she "might have a little something something" in the works with BTS. Fans didn't think much of her comment at the time, but on Aug. 20, Becky G posted an Instagram Story showing off a bunch of Korean snacks.

That could just be a coincidence, but considering J-Hope is in LA right now, fans think Becky G is hinting that her BTS collab is in the works right now.

I seriously don't know what to think, but whatever J-Hope is working on in America, I know that it will be absolutely amazing!

More like this
Will BTS' 2021 Comeback Be At The BBMAs? This Fan Theory Is Pretty Dang Convincing
By Michele Mendez
Are BTS & Coldplay Collaborating On A Song? Here's Why Fans Think It's Happening
By Michele Mendez
These Tweets About BTS' McDonald's Meal Announcement Are Hype, But ARMYs Have 1 Question
By Brandy Robidoux
Stay up to date