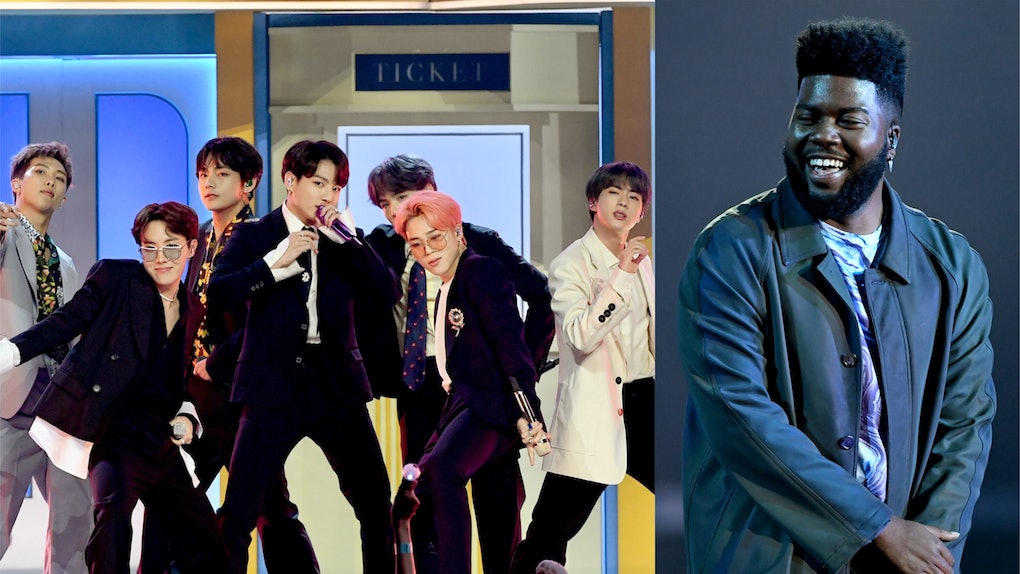 Not long after BTS dropped their collaboration with Halsey for "Boy With Luv," the K-Pop group announced that they were working with yet another American artist on new music: Khalid. Just like BTS' collaboration with Halsey, the group's team-up with Khalid isn't just some spontaneous collab. Oh no, it's actually far, far from that. BTS and Khalid have a long history together, one that has developed into a nice friendship after they met back in 2017. Here's the complete timeline Of BTS and Khalid's friendship, which shows just how perfect Khalid is for BTS' next epic collab.

The 2017 American Music Awards was a turning point for BTS' career because it was the group's live-television-performance debut on an American award show. For many artists in the crowd and viewers watching at home, it was the first time they were exposed to BTS' music. Among the performers that year was Khalid, who collaborated with Imagine Dragons for a rendition of his single "Young Dumb & Broke." Behind the scenes at the AMAs, Khalid stopped by BTS' dressing room to meet the group for the first time and that was where both artists revealed how much they admired each other's music.

Take a look in the video below. You can skip to the 10:10 mark to see the meeting go down.

In May 2018, BTS and Khalid were performers for yet another award show — this time the Billboard Music Awards. Khalid performed his collaboration with Normani, "Love Lies," and BTS was, of course, watching them in the crowd. One fan recorded the group's reactions to the performance, and judging by their faces, they seemed to really enjoyed it — so much so that they gave Khalid and Normani a standing ovation. BTS also gave Khalid another standing ovation when he won the award for Best New Artist.

Three months after the 2018 BBMAs, Khalid tweeted that he had been listening to the group's Love Yourself: Answer album and that he had one song, in particular, on repeat: Jimin's "Serendipity" (keep this in mind for later).

A few hours later, Jimin saw Khalid's tweet and responded with, "Thank You." Jimin also mentioned Khalid during BTS' livestream later that day for Love Yourself: Answer. He said that "Serendipity" had been receiving a lot of love from people around the world, including Khalid. He had a big smile on his face talking about Khalid's shoutout on Twitter, which shows just how much the singer's tweet meant to him.

Ahead of BTS' performance on Saturday Night Live, J-Hope shared a video of himself jamming to Khalid's "Outta My Head" in his hotel room. The video kind of went viral online (it has over 8 million views as of this post) and even reached Khalid himself, who challenged J-Hope to a dance battle (which I and all the other ARMYs are still waiting for, by the way)!

After months of tweeting each other back and forth, BTS and Khalid finally reunited in person at the 2019 Billboard Music Awards. In the video, Khalid had a conversation with the BTS guys and I really wish I knew what they talked about, maybe the dance battle between Khalid and J-Hope? I wish. Now that a collab is confirmed, I wouldn't be surprised if they were planning it right then and there. A fan recorded the whole interaction and shared it on Twitter, where Khalid called BTS his "brothers."

Just a few days after the BBMAs, Khalid attended BTS' second show at the Rose Bowl in Los Angeles. While there, he posted a few clips of the concert on his Instagram Story. Remember how he said "Serendipity" was his favorite song? He was finally able to see Jimin perform it live and he even sang along to it!

Khalid also posted a video of himself singing to "Idol" and proved his dedication to the group by getting himself an ARMY bomb — the ultimate symbol of a BTS fan.

Khalid then caught up with BTS backstage and took a few photos with the group. Two interactions within a week? Yeah, I should have known something was up.

May 10, 2019: BTS Confirms Collaboration with Khalid

OK, now to the present! During an interview with 102.7 KIIS-FM Los Angeles, RM confirmed that a collab between BTS and Khalid was definitely in the works. When JoJo Wright asked him about potential collabs, RM said, "Actually, I have to mention Khalid, our friend, it's really happening, so please stay tuned for our Khalid collaboration."

And there you have it — BTS and Khalid are working on new music together, and I couldn't be more excited to hear the end result!

Whew, that was a lot of turning back time, but it just goes to show that BTS and Khalid have been gradually building a real friendship together over the past few years, and that Khalid is the perfect artist for BTS' next collab.